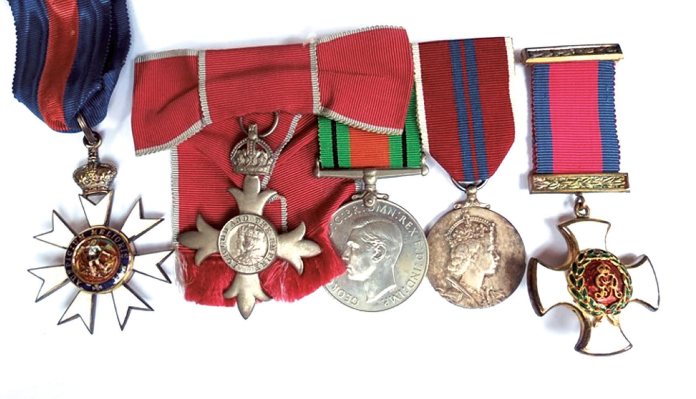 International interest spread far and wide with the latest Militaria auction, with strong interest from much of Europe, the Middle East, the USA and winning bids as far as China and Australia, highlighting the wide catchment the sale has developed.

A 500 lots sale was always likely to attract bidders and the sold percentage of towards 80% confirmed that feeling. A quarter of the sale total went to online bidders who also underbid around 15% of the lots; strong total online interest complementing the traditional aura of the auction. Something for all, with artefacts ranging from those with small budgets through to international collector; a model for the perfect sale.

The first section of the sale included uniforms and equipment which brought a few surprises. An unassuming military power supply unit in a poor condition was given a modest guide price of £20-30, yet the bidding flew to reach a strong £130. But literally flying the flag for this section was a Royal Naval white ensign and a Uruguayan flag; sold together for over three times the lower estimate to reach £170.

Next in the auction came the collectibles and instruments section, with a collection of Del Prado Napoleonic figures estimated at £200- 300 achieving £270. A small collection of shot measures with a lower estimate of £140 hit £160. Two reproduction models of Colt revolvers reached £60 and £80 whilst expectation was only at £25-40.

Then we had the firearms section – with the new EU deactivation laws in effect, the sale moved its focus to obsolete and antique arms not subject to legislation. The first lot to go under the hammer was the Turkish Peabody with Martini action. This obsolete calibre rifle, popular with its unchanged working parts, reached £320, a strong price opposed to its guide of £120-180.

A 19th Century double barrel shotgun with drum and nipple percussion action, gilded lettering and foliate design shone with quality in reaching £360. In contrast to the elegance of this lot, it was shortly followed by an Indian army percussion musket. In relatively poor condition its £200 hammer price brought surprises all around. An unusual eastern blunderbuss with a crude mechanism and build was expected to reach £150 but exceeded this, blasting its way to £190.

Always proving popular 90% of the swords met or exceeded expectation. A Victorian 1822 pattern sword with its three bar hilt and shagreen grip, estimated at £120-180 was fondly received by both bids online and in the room, fetching £240. However, the most unexpected result was an 18th Century dagger which, despite its slightly bent blade tip, sold for a very positive £270. The section closed with a Russian 1827 Pioneer sword. Which despite being too cumbersome for combat and its primary use for cutting down undergrowth, fetched £270.

The largest feature of the sale was the bayonet section. Organised into categories, it was weighted with examples from Germany and Britain.

Maintaining popularity, the British section had some good results. A Lee Enfield No. 4 Mk I cruciform bayonet sold for £95, and an 1856 pattern Yataghan bayonet went over-guide at £110. Allies France were represented by the unusual form of French Chassepot. With its brass ribbed grip, hooked quillion and multiple fullered straight blade, it stood out. Its hammer price at £260 reflected its rarity.

On the other side of the table, a Japanese Wakizashi with its rayskin tsuka and black lacquered saya had good interest, going over-guide at £340. This was followed by two private German collections highlighted by two similar WWI saw-back bayonets making £180 and £220; the latter with original scabbard and leather frog.

It was the ‘Rest of World’ section which sparked most interest, with the 18th Century Yataghan sword valued at £200-300 fetching £320. Better still; the sale featured a 19th Century Mameluke sword with bone grips iron cross guard, curved blade with double edged yelman towards the point, leather covered scabbard with twin langets. This example hit £950, with interest on the phone, internet and in the room.

German militaria is a minefield (pardon the pun), with more copies being produced on this day than Germany produced on the average day during the peak of its production. The increased volume of German forgeries has, however, had a positive impact on original examples, making them more sought-after. An Afrika Corps helmet in tan, together with a peaked cap, fetched upperestimate at £400. German M16 pattern helmets reached £190 without liner and £300 in a nearer complete form.

The ephemera section of the sale always has something interesting. This auction it was an RAF pilot’s log book belonging to L.E.J. USSELL from the 644th Squadron, £420. The lot included paper ephemera, cloth badges, a service and release book and a display board, but considering there were no medals included a very strong result. This was followed by a very interesting collection of WWI aerial reconnaissance photographs depicting trenches, aircraft, zeppelin housings and sunken naval craft, which sold for a positive £280 and over-estimate.