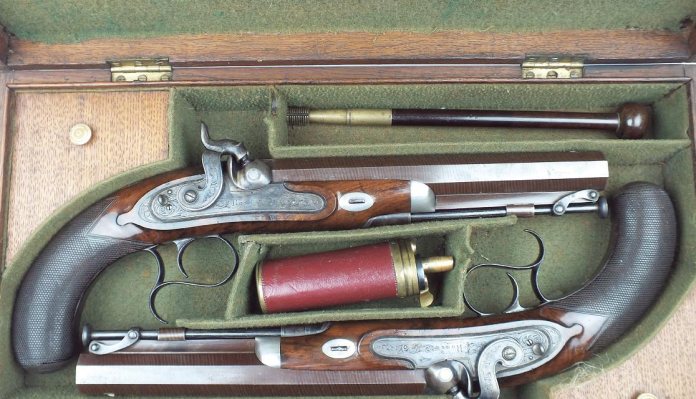 An across the board auction of 450 lots covering most of the disciplines within the arms and armour market, from Eastern and Tribal, through armour and pistols, to swords and bayonets, made up the most recent auction at Antony Cribb Ltd. Playing to a full room at the Milton Hill House Hotel and with free tea and coffee on tap, the auctioneer took command and herded the room and internet bidders along at a strong pace.

In the Japanese section, a clean Muromachi period Katana, with its desirable NTHK Shinza authentication papers, was keenly contested between the room and the internet and cruised past its bottom estimate of £800 to sell to a collector in Italy at £1450. A well-represented collection of Indian edged weapons also saw a series of steady prices, but as is often the way in the arms and armour market, it is all down to condition and rarity to drive the higher prices. A series of Katars drew a lot of interest with the highest price of £1000 tripling a top estimate and a nice gold damascene decorated example took a mid-estimate £460.

A patchy early Edged weapons section saw a clean mid 18th Century Basket hilt to Cobham’s Dragoons stall just below the top estimate, to take £3100 to a telephone bidder. Particularly rare, this basket hilt was regimentally engraved at the forte and consequently offered as near a guarantee as possible that it saw service during the Jacobite Rebellion and in particular at the historical battle of Culloden.

It is always exciting when presented with the opportunity to lift the lid of a cased set of pistols and more often than not the contents are always interesting or fascinating, but it is not often that the expectation of seeing something in pristine condition is met. Lot 132 in the percussion pistol section certainly exceeded many bidder’s expectations, when a punchy estimated cased pair of officer’s pistols soared past the bottom estimate of £5000 and after a protracted duel, excuse the pun, between several room bidders and the internet witnessed the hammer coming down at £8300 to a UK based collector.

Rarely does the Accessories market see very high prices, a good leather covered three-way powder flask will often hit the £1000 mark, but it is not often that there are large four figure prices seen. One area of this market that regularly does see higher prices is that of cartridge display boards. A particularly rare and desirable example of the many Eley versions is the Sporting and Military Cartridges display. Having had its backboards replaced, the valuer had put a conservative £800-£1200 estimate on lot 169, sportingly allowing the market to decide how much the replaced backboards were going to affect the price. In the end the replaced backboards didn’t make much difference and after a protracted battle between a standing bidder at the back of the room and an Internet bidder, a hammer price of £3250 was achieved.

Echoing my comments in the last paragraph about some markets not often seeing high prices, the world of bayonets saw a particularly good price when lot 391, a 2nd Model Baker Rifle bayonet and scabbard, was offered to the room. Again, priced at £200-£300, it was left to the bidders to decide how much the rare and original scabbard added to the value of this lot. Another protracted confrontation between the internet and our standing bidder at the back of the room saw ownership pass to the bidder in the room, when the hammer eventually fell at £960.

A further offering from Antony Cribb Ltd of 400 lots of Arms, Armour and Militaria will be available on the 31st of May and with buyer’s premium a competitive 18% plus VAT, there is sure to be something for everyone’s purse. For further information about forthcoming auctions please visit www.antonycribb.com.

Holt’s latest auction once again presented auctioneers David Porter and Alastair Dixon with a daunting 800 lots and eight and a half hours in the chair. Their charismatic efforts brought the sale to a successful conclusion and a total hammer price just shy of £1million (before aftersales).

The trend for an increasing client presence via the internet proved true again, easily doubling the activity in terms of registered interest, actual participation and successful purchases over the previous auction this time last year. With The Holt’s catalogue being available free of charge via the Holt’s App in digital format quicker than its printed counterpart and with no additional charge for using the Invaluable online bidding platform, it looks like a trend set to continue.

Donald Dallas’s ‘In The Gunroom’ article in the sale catalogue that focused on the power of provenance could not have been more timely, with many of the highlights of the sale reaching impressive levels precisely due to having a great back story. Lot 1080, the presentation gemsbok cane from Cecil Rhodes to F.C. Selous was always going to be a difficult item to predict value – but a hammer price of £15,500 certainly surpassed all expectations. Lot 1325 A unique pair of Purdey hammer ejectors made for the Sultan of Morocco topped their estimate with a hammer price of £42,000 and the fine hammergun with links to King Leopold II of Belgium, Lot 1810, came in at a very respectable mid-estimate price of £4100. There is an exception to every rule – and in this instance it was provided by Lot 625 – an amateurmade miniature of a Webley & Scott MkII air pistol. Estimated at £150-250 it obviously caught the imagination of the collectors, finally settling on a hammer price of £750.

Born in Cumbria in 1925, the professional veterinarian sadly died at the age of 89 last year. His family has consigned the actual over-and-under 12- bore C Grade Browning that Bob used to beat 55 shooters from 34 nations and score 198x200 to win gold at the 1968 Mexico Olympics. Bob also used the gun to compete in the 1964 Japan Olympics where he was placed 7th. With an estimate of £7000-9000, Lot 1600 features 29 7/8-inch nitro reproved barrels, fine acanthus scroll engraving with the right side later gold-inlaid with the Olympic Rings.

Nicholas Holt commented: “I first met Bob approximately 15-years ago at the Inn at Whitewell in Lancashire. I was holding a valuation day there and he walked in and then told me his story. A complete gentleman and will be sadly missed.”

John Browning, whose family founded Browning gunmakers, added: “Bob Braithwaite was one of shooting’s great natural talents, and his Olympic medal one of the sport’s most romantic stories. A game shot in his youth, Braithwaite only took up competitive trap shooting in his thirties. He practiced when he could squeeze in time from his busy Lancashire veterinary practice, and still set an Olympic record of 198x200 in Mexico City in 1984 that stood for years. The gun that made it possible is a unique part of shooting’s history.”