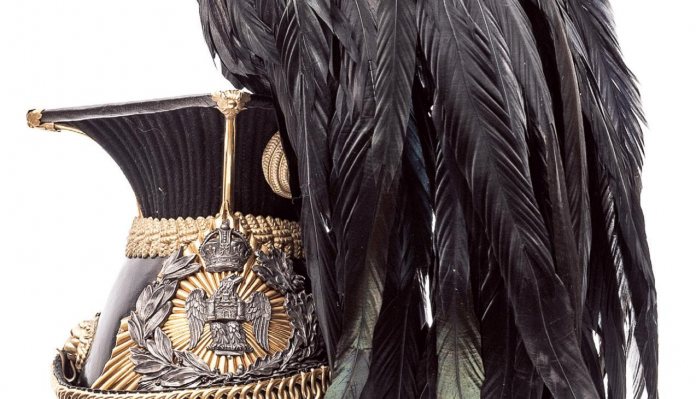 Roy Butler from auctioneer par excellence, Wallis & Wallis, brings us some of the highlights from the Arms & Militaria Spring Connoisseur auction, 17th & 18th May 2016…

This superb Spring Fine Sale brought collectors and dealers from far and wide and commission, telephone and internet bidders from as far as Australia, and the USA.

We start the sale with a pair of medals. A Military General Service 1793-1814, with one clasp Salamanca; together with a Waterloo Medal 1815 (Lieut. Henry Quill, 32nd Regiment Foot), GVF or better, (as was often the case the Waterloo Medal suspension ring had been replaced by a straight bar). A superb pair, which the roll confirms. It had a presale estimate of £4000-6000 and sold for £7600. See note at the end of this report.

Headgear can often make a wonderful display but we start with a modest looking item in that category. A rare other rank’s ‘Hummel’ bonnet of The 71st (Highland) (Light Infantry) circa 1830, of stitched padded blue cloth, with chequered red, white and blue wool headband below embroidered scarlet ‘71’, with a scarlet tuft to the top. It came was ex J.J. Miller Collection and had a little moth in the headband, hardly affecting the appearance. It went for £1100.

Now we move to more solid headgear with this fine Prussian M1895 Garde Infantry Reservist officer’s parade pickelhaube, fully gilt mounted, the eagle plate with silver and enamel Garde star above small reservist cross, the tall spike with white yak hair plume, with National and state rosettes and pale silk lining. It was in very good condition and the interior had traces of what was probably the original owner. It sold for £1700.

Here we have a good Victorian officer’s lance cap of The 12th (Prince of Wales’s Royal Lancers), black patent leather skull and peak, embellished with gilt lace bands, scarlet sides and top, with gilt cord cross lines, velvet backed, beaded link chinchain with lion head ear sockets, gilt rayed plate bearing silver plated Royal Arms and supporters surmounted by Prince this the Sphinx and ‘Egypt’ with five battle honour scrolls ‘Central’ and ‘India’, and ‘Peninsula’, ‘Waterloo’ and ‘Sevastopol’; together with a Commission, issued by the Duke of Rutland, to Charles Ashton, late Captain 12th Lancers, appointing him Supernumerary Lieutenant in the Leicestershire Volunteer Cavalry, 1871. It made £3000.

An officer’s lance cap of the Bedfordshire Imperial Yeomanry (1901), the top of the skull in black patent leather with gilt leaf ornaments on the corners, upper skull sides in ribbed blue cloth, with gilt metal strips, gilt metal gimp boss with plain ball button in centre. The silver badge of the regiment being an eagle with a castle on its breast. Black swan feather plume with gilt socket, ring chinchain. The hammer fell at £3100.

A very good French dragoon officer’s helmet circa 1840-1845, the gilt skull with leopard skin turban, tall comb, the side profusely decorated with volutes, floral devices and leaves, in the front a Medusa head finial, and a grenade, on the front of the comb is a black hair ‘shaving brush’ plume in foliate socket, and at the back is a long black trailing plume, twisted wire link chinchain, backed with leather, with stylised leaf embossed ear roundels. It was in very good condition retaining all its original gilt and went for £3800.

Here is a very fine and striking Prussian M1899 helmet of an officer of the Garde du Corps or Garde Kurassiere Regiment, of tombak, with silver plated mounts and trim, including Garde star plate with enamelled centre, and parade eagle crest, with gilt chin scales, national and state rosettes, and pale silk lining. It was in very good condition and the hammer fell at £6100.

Over the years we have built a reputation for getting high prices for tribal art. Here is a Tongan hardwood club, 40-inches long, intricately carved overall with horizontal, diagonal and chevron shaped bands of hatched and wavy lines, inhabited by occasional minute figures, stylised animals and a single bird, the handle end with pierced loop for a cord, and carved with two stylised birds, etc. It had good age patina but some small age splits throughout its length. It went to an internet bidder for £6000.

Now we go to this early 19th century officer’s sword of The 52nd (Oxfordshire Light Infantry) Regiment, curved flat blade 31½-inches long, etched panels on one side with crowned Royal Arms, supporters and motto, on the other side with crown, strung bugle, ‘LII’ and wreath (faint). It was in good condition, the hilt retaining approximately 50% original gilt. It sold for £2500.

A cavalry officer’s 16-bore flintlock pistol carbine by D. Egg, circa 1790, the flat topped round barrel 12-inches long with folding leaf rearsight and engraved ‘D. Egg, London’, rounded signed lock with swan neck cock, plain walnut fullstock with regulation brass mounts, the butt with keyed steel plate into which an 11-inch walnut skeleton stock clips by means of a spring catch, upper tang engraved ‘Egg’s Patent - Butt’, and with small lanyard ring on the left side, pistol and stock both impressed with the number ‘4’. The hammer fell to one of the very few successful room bidders at £2500.

Finally, we had this rare 2nd model seven-barrelled 30-bore Nock flintlock volley gun, circa 1790. Measuring 37-inches long overall, the 20- inch barrels with deeply struck Tower crossed sceptre and crown proof marks, the right outer barrel engraved ‘H. Nock’; the lock with ring neck cock, reversed frizzen spring, and no visible markings apart from an ordnance viewer’s mark; the walnut stock having Egg type chequering to the wrist, and with conventional brass mounts, including ramrod pipes with original steel ramrod. It was in good working order and condition (the butt refinished and with a patch of pitting to the lock). It went to a bidder on the internet for £15,000.

The Next Few Sales Are: