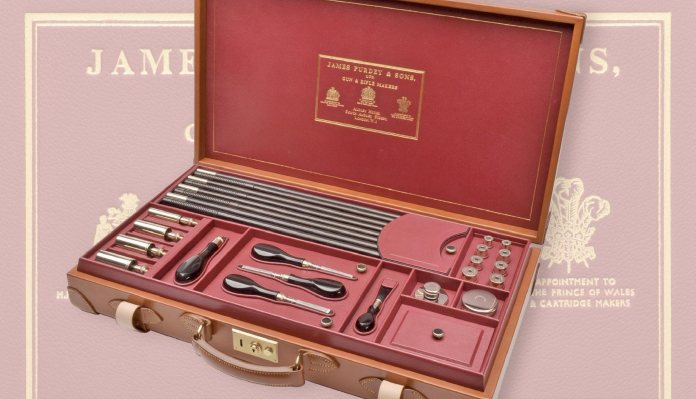 This auction saw the first part of the huge single owner German collection come under the hammer. We start the report by reporting a few lots from this section.

There were a number of edged weapons in the sale including a scarce Third Reich Land Customs official’s dagger, the blade 10 inches long, by Ernst Packe Sohne, M B H Waffenfabrik Solingen. It had an alloy hilt with wire bound grey leather covered grip. In its steel mounted grey leather covered scabbard and sold for £1050.

Uniforms are highly sought after today both by collectors and re-enactors. A scarce Third Reich Luftwaffe smock, of splinter pattern camouflage, with insignia to Unteroffizier Field Division/ground combat units. In very good condition, it sold for £1050. A very scarce Third Reich SD Jagdverband pea camouflage jacket, with rank of Sturmann, SD shoulder straps, police style cut to the jacket, Police and SD arm badges. In excellent condition it made £1000. A fine Third Reich M43 Afrika Korps green denim tropical service tunic, to an Unterfeldwebel of artillery complete with Afrika Korps cuff title, stamping denotes issued in Munich 1943, shoulder board buttons slightly rubbed otherwise it was in very good condition. It came with a pair of tropical green denim breeches and both were in unissued condition, selling for £700.

Other Items Of Interest

Moving away from the German collection, we have a very scarce 18th century gunner’s brass rule, 12 inches overall, finely engraved on one side with scales relating to weight, calibre, proof and service charges, etc. of brass guns and howitzers, mortars, and iron guns and howitzers, also size of vents, when a gun should be condemned, composition of fuzes etc, and on the other side with graduated inch rule. Gunner’s calipers are scarce but rules of this kind are almost never seen. There was a great deal of interest from bidders on the Internet and an online bidder finally bought it for £950.

A fine Scottish basket hilted backsword, circa 1740, the single-edged doublefullered 33½ inch blade with traces of engraved decoration, the enormous basket guard consisting of straight vertical bars with keyhole piercing, the side guards consisting of a single pierced panel with heart shaped ram’s horns and fluted vertical bars. It was in excellent condition and sold to a bidder in the room for £1950.

A fine quality early 19th century Indian dagger katar with 9 inch blade, crisply made, with armour-piercing swollen point. The hilt was of traditional form and entirely covered with gold damascened panels of wavy diamond shaped rosettes on a background of vines. It came with its original gold damascene mounted sheath and, after a long bidding battle in the room it was bought for £1550.

A mid-18th century European flintlock hunting sword pistol, the 24¾ inch single-edged blade with single fuller and a 2½ inch, turn-off rifled cannon barrel, the breech engraved ‘G Schwartz in Aohlau’, was offered in fairly good condition and made £1500. Note: Aohlau is the former name of Olawa in Silesia.

A cased pair of 38 bore double-barrelled over and under turnover percussion boxlock pistols in their green baize lined mahogany case with accessories, made £1650. The one-piece slab sided 3½ inch barrels with London proofs and engraved ‘Wilson, London’, each with scroll engraved frame, hidden trigger, finely checkered walnut butt and engraved steel butt cap. They were in crisp condition with hints of colour-hardened finish.

Japanese matchlock pistols are scarce and this was a particularly lovely example. The 40 bore octagonal sighted 5¾ inch barrel with bulbous muzzle, inlaid with silver dragon and clouds, in a cherry wood stock with brass back action lock. It was in good condition and sold for £650.

A 24 bore John Manton flintlock duelling pistol number 3618 (for 1801), had a 15½ inches long with a 10 inch, well rebrowned, sighted octagonal twist barrel with break off breech, with single gold line, gold inlaid ‘...Manton * London…’ on the top flat, and gold touch hole. The flat lock engraved ‘Manton’, with rainproof pan and large roller on the frizzen spring. It was in very good condition and went to a bidder in the room for £3100.

A really charming and tiny 120 bore cannon-barrelled flintlock boxlock muff pistol, by I. Silverside, circa 1780, in good working order and after much competition, sold to a telephone bidder for £1750. The barrel, frame and trigger guard made of tutenag (paktong), had a 1 3/8inch turn off barrel with London proofs at the breech, the signed frame engraved with toothed border and scrolls.

Although the Ukrainian and Russian buyers have been scarce so far this year, we are still getting excellent prices for Russian objects. A rare 20 bore Russian flintlock fowling piece, circa 1740, the 41 inch two-stage barrel with octagonal breech stamped with scimitar mark and engraved with the maker’s name in Cyrillic. The plate was chiselled with a dog chasing a wild boar and the stock was decorated with a gilt metal mount pleasingly chiselled with a hound chasing a horse. It was in quite crisp condition for its age and sold to an internet bidder for £2000.

A brass barrelled flintlock blunderbuss with spring bayonet, by Richards, circa 1785, featured a 14½ inch bell mouth barrel with Tower private proofs and top mounted triangular bayonet released by a thumb catch on the breech tang. The signed stepped lock had a safety bolt and large roller on the frizzen spring, a walnut stock with engraved brass mounts. It went to a commission bidder for £1700.

Next was a good cased 5-shot 54 bore Tranter’s Patent double action percussion revolver, the Birmingham proved six inch barrel engraved ‘R.S. Garden, 29 Piccadilly, London’ and ‘1166’, frame stamped ‘Tranter Patent’ in small oval and engraved ‘No 17,261T’. It was in very good condition, the frame and barrel retained 90% of original mirror blued finish and traces of colour hardening to the cylinder. It came in its mahogany case with many accessories and went to a room bidder for £2600.

A good price was paid for a fine cased 5-shot 38 bore Adams Model 1851 ‘Dragoon’ self-cocking percussion revolver. The London proved eight inch barrel engraved ‘Wilkinson & Son, Pall Mall, London’, the frame engraved with scrolls and ‘Adams’s Patent No 1449’. The finely checkered walnut butt with steel cap having engraved sprung trap. In excellent condition, the barrel and frame retained 95% of original mirror blued finish, cylinder with traces of colour hardening. It came in its mahogany case with many accessories, which were in excellent condition and went to a commission bidder, against the internet, for £4200.

A good cased 5-shot 54 bore Adams Model 1851 selfcocking percussion revolver in its original oak case with accessories made £1650. The London proved barrel 6½ inch barrel engraved ‘Deane Adams & Deane. Makers to HRH Prince Albert 30 King William Stt, London Bridge’, the frame engraved with scrolls and ‘Adams’s Patent No 5156 (R)’, number repeated on the cylinder. The finely checkered walnut butt with steel cap having engraved sprung trap. It retained nearly all original mirror blued finish on the barrel and frame, but there was some wear to the trigger guard, and a patch of pitting to the cylinder.

Holt’s Auctioneers’ June auction attracted a total of £1.05m, which is expected to rise to around £1.3m once aftersales and the sealed bid sale have concluded. The June auction coincided with the bi-centenary of Waterloo so the specialist auction house was pleased to bring several relevant items to market, including a model of H.M.S. Victory and a bronze of Napoleon astride his noble charger Marengo.

Senior Valuer Roland Elworthy commented that the curio section also had some interesting lots this quarter: “This part of the auction was dominated by a remarkable cleaning kit by J. Purdey & Sons. It was rather more than a cleaning kit really; for multiple bore sizes with a full complement of turnscrews, jags and other items all by Mike Marsh and all housed in an exquisite leather case. Built to mark the maker’s bi-centenary (Lot 1074) the wonderful set made a stonking £15,000; more than the cost of a decent old London sidelock!”

One of Hartmann & Weiss’ superlative .300 Win mag bolt-rifles (Lot 1133) realised £12,000 before moving into double and break-action rifles which began with a Rigby boxlock non-ejector (Lot 1200), made special by being the very first commercially sold in the maker’s renowned .470 calibre, which was hotly bid up to £11,000.

Bit On The Side

Moving into sidelocks Holt’s began with yet another fine Royal de Luxe with gold-washed internals (Lot 1400) that sold for £20,000 and a favourite gun of the section, a wonderfully original easy-opening Boss & Co. (Lot 1415) that reached £15,000. The gun had spent much of its life in the family’s bank vaults and so was in remarkably untouched order.

The over/under section saw a little-used Beretta SO6 made £9200, while in boxlocks an exceptional Imperial G-Grade W.W. Greener (Lot 1720) in fine, original order, fetched a solid £12,000, a fantastic result for an 80 year old boxlock.

The next auction at Holts is on Thursday 17th September. For further information visit www.holtsauctioneers.com