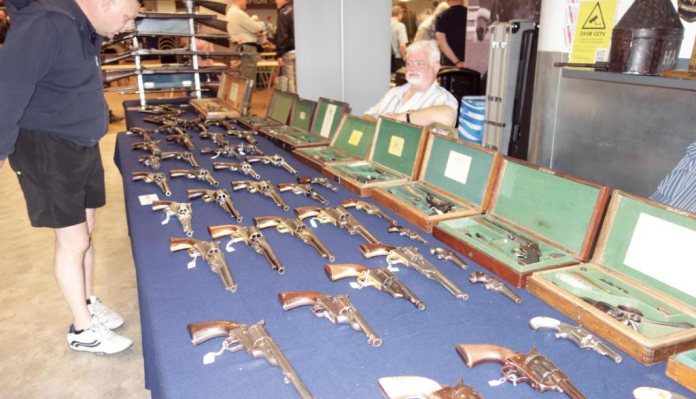 When I found out that Peter Binfield was planning an antique airgun and militaria fair, I was really hopeful that it would be a success but also quietly confident. Peter has been a regular on the Airgun BBS internet forum for many years and from what he’d posted, he was quite an expert with regard to old airguns. He’s got quite an extensive collection, built up over the years and he specialises in classic spring guns.

There was a lot of support for Peter’s idea on the forum and many people stated that they’d be attending, which was good to hear and people seemed to be coming from all over the UK! Peter had really struck a chord with his fellow collectors, so it looked like it would be well attended. He had been very disappointed with how things had turned out down at Bisley and felt that an airgun fair in the south of England would go down well with airgun enthusiasts, collectors and the trade; and he wasn’t wrong!

The date was Sunday 25th of June and the venue was the Kempton Park Race Course, and if you don’t know where is, it’s in Sunbury-on-Thames in Middlesex, not that far from Central London, only 16-miles in fact, and easily accessible from the M25 orbital motorway that rings the capital. After an early morning drive around the southern part of the M25 and a short way up the M3, I was more than ready for a decent cuppa and a bacon roll, and the caterers didn’t disappoint. Peter had told me that the caterers were good and he was right on that score! During my food pit stop, I bumped into a couple of other shooting journalists and spent a while chatting about how good it was to see a venture such as this.

On entering the venue, I was blown away by how busy it was – I just wish I’d taken a photo to show it! I called Peter as arranged and we met up and he was clearly pleased with the turn-out. He had obviously put a lot of hard work into getting his venture off the ground and it was good to see that it had paid off and all those who said that they’d attend had done so. He looked pretty exhausted to be fair, as there had been a lot of late nights and he was suffering from a very bad back, so hats off to him for even being on his feet!

The venue itself was the ground floor Exhibition Hall, so there was plenty of room for all the trader’s tables and I was very impressed by the turnout. There was a mix of fulltime dealers and private individuals thinning out their collections and between them they’d brought a wide selection of airgunning goodies, from positively ancient ball reservoir pre-charged pneumatics, classic Webley pistols, to modern spring and pre-charged pneumatic air rifles. As I walked around, taking in the atmosphere, it occurred to me that this really was the start of something great and everyone I spoke to was full of enthusiasm. There were all manner of beautiful classic airguns to buy and I’d have loved to have bought a dozen of them! It wasn’t all mega-money prices either, as there was something there for all budgets.

Some items on display looked like they should have been in a museum and there were whole tables of real classics! I saw a selection of transitional Colt revolvers that charted how ingenious gunsmiths of the late 19th Century had converted cap and ball revolvers to use self-contained cartridges, by fitting loading gates and case ejector rods. Their rarity was reflected in their prices however but I’m sure those with a few quid in the bank would have loved to have snapped them up. There were also some fine examples of Smith & Wesson top break revolvers.

D&B Militaria were in attendance and had a broad range of deactivated guns for sale. One accessory that stood out however, was an extremely rare maintenance kit for a First World War Chauchat M1915 light machine-gun. This appallingly unreliable weapon is often referred to as the ‘worst machine gun ever’; so, to see the equipment some poor machinegunner would have used to keep his dreadful firearm working was very interesting.

As I mentioned before, the reception for this event was very positive all round and there was one question on everyone’s lips: “When’s the next one, Pete?”. Well, the next one will be called the Kempton Vintage & Classic Arms Fair and it’s on Sunday 15th of October. Word has obviously already spread far and wide how good this event was and I can’t wait to go. I can see it being bigger and better in every way and with free parking, easy access to the M25 and mainline trains to Kempton Park, it is going to be the place to be for anyone interested in airguns, deacts, swords, bayonets and general militaria. Gun Mart will be going along, so come and say hello!