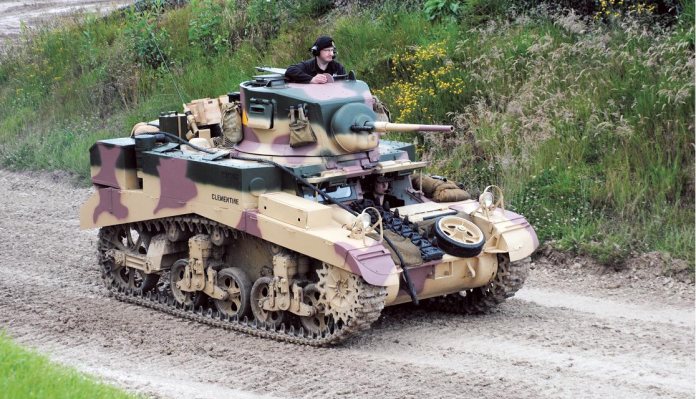 If there is one thing of which there is no shortage at Tankfest, it is weapons. Tanks, trucks and tripods all have machine guns mounted on them, with more weapons either being carried by reenactors or on static display. Then, of course, there is artillery, which is displayed in a range of calibres from 6-Pounder antitank guns to 25-Pounder field guns. As if this is not enough, there are deactivated weapons on sale from the trade stalls, all of which is more than enough to satisfy the interests of any weapons enthusiast.

Tankfest is organised by the Tank Museum at Bovington in Dorset and is a well-established date in the calendar of collectors, military vehicle owners and re-enactors, and beyond mentioning the date, it requires no introduction. This year’s event was held over the weekend of 25th - 26th June, and if you were not there you missed another spectacular event, which attracted another record audience. Indeed, it was a sell-out event, which reflects the popularity of the show. Even though I have attended Tankfest many times, I find there is always something new to be seen and the grand finale battle is always linked in to commemorate a historical action. This year’s battle was themed as Tunisia in North Africa, 1943 for a very good reason. Walking through the entrance and into the showground the display was impressive. Tankfest is always good, but this year’s show featured a bumper crop of vehicles, from historical to those in current service.

I always like to have a quick stroll around the line-up of vehicles to get a sense of what treats are in store and then I settle down to visit the re-enactment displays. Seeing the vehicles parked up is impressive, but it is no substitute for seeing them in action. That is the real thrill as they charge around the main arena putting on displays of mobility and the biggest demonstrating how manoeuvrable they are despite their size. For the more sedate visitor, there are the trade stalls, which this year extended into the main display halls inside the museum. Yes, the entrance ticket to Tankfest includes the museum itself. For collectors this is wonderful, and I did make several purchases.

This year I noticed a perceptible drop in the number of re-enactment groups participating compared to previous shows. Despite this, the groups in attendance mounted excellent displays, which more than compensated for the absence of others. There was still a good representation from WWI to Vietnam and a good balance of WWII, including the 2nd Guards depicting the Soviet Red Army. The vehicles were an international turnout, such as the Braziliandesigned and built EE-11 ‘Urutu’ APC, which was parked at the entrance to greet visitors. Like some of the re-enactment groups, there were some vehicles which were conspicuous by their absence in the line-up, such as the Churchill and Matilda Mk II. The Matilda II is a particular favourite tank of WWII, but the example held by the museum was having a major service, which forced it to miss the show. Even so, there was more than enough to compensate for this. For example, the Valentine and T-34/85, and the tank which everybody had to see, the venerable Tiger.

Moving among the re-enactment displays, I was struck by how many now have trenches prepared for them to add to the realism of their displays. The Red Army 2nd Guards, had a Maxim machine gun sited as though ready for action on the outskirts of Stalingrad. Group members were in full kit and a good range of weapons were on display, including all the standard infantry weapons from the DP machine gun, PPSh and PPS sub-machine guns and the Mosin-Nagant and Tokarev SVT-40 rifles. Moving between the German, British and American displays, all the standard weapons were there, Bren Guns, MG42 and rifles, but a few items stood out and attracted questions, such as the mortars.

For me personally I was drawn to a replica weapons container displayed by a couple of chaps depicting German Fallschirmjager (Parachute) with all the equipment. These containers were known as ‘Waffenbehalter’ and were painted in various colours to denote their contents. They were dropped by parachute and fitted with buffer at one end to absorb the impact on landing. Opening the lid allowed the troops to deploy carrying handles and an ingenious set of wheels, so that the container could be pulled. Typically, these containers weighed 60-pounds empty and could be loaded with up to 200-pounds of weapons, ammunition and equipment. A platoon of 50 parachutists would have been dropped with around 14 such containers. This display was interesting and talking with the guys revealed a lot of details.

The gates opened on site at 9am each day, with the first arena displays beginning at around 10.30am, which gave visitors time to take up a position to watch the vehicles opening the show. For the next three hours it was non-stop tanks, trucks other vehicles, which included the modern vehicles that are currently in service with the British army. These are vehicles seen on news broadcasts from places such as Afghanistan or photographs in newspapers. The names do not usually appear in these items but the image is familiar. Here at Tankfest you learn the names, such as Jackal, Terrier, Trojan and Titan, and see them in action. The Warrior APC was among those vehicles in the arena and showed how an infantry section attack is mounted. A break in the programme allowed an opportunity to walk around the trade stalls and visit more re-enactment displays.

A very quick tour of the museum exhibition and then it was back to the programme with more vehicle displays, opening with several Chieftain and Challenger tanks thundering around the arena. Bridgelaying and recovery versions showed the power of these massive vehicles, which the army need to support operations. As soon as these had finished their display the next series of vehicles entered the arena to keep the excitement going.

It was like some variety show with large heavyweight vehicles instead of singers and dancers as the main attraction. The section in the programme titled ‘Rapid Response’ involved mixture of old and new vehicles, ranging from the German Kubelwagen and American M16 Multiple Gun Motor Carriage, with its quadruple .50inch calibre machine-guns, to the Saladin armoured car and the Scimitar and Scorpion CVR(T)s. These were all designed to keep up with either reconnaissance units or provide fire support. This was followed by a range of troop carrying vehicles such as the ‘Buffel’ from South Africa and the FV432 and M113 APCs, which had served with the British and American armies respectively.

It’s always interesting to see any tank in action, even those from the ‘Cold War’ era, but the programme became exciting as the tanks and other vehicles from the Second World War entered the arena. The reaction among the watching crowd was noticeable, as Stuart M3A1 and M5A1 tanks rolled into the arena along with three of the actual Sherman tanks which had been used in the 2014 film Fury starring Brad Pitt. One of these was the actual Fury tank itself, a Sherman M4A2E8, which still has the name painted on the barrel of the 76mm gun.

As more unusual WWII vehicles were driven into the arena, the level of interest increased and by the time the Panzer III and the Tiger were on display everyone was anticipating the grand finale battle re-enactment, which this year was a tribute to the fighting in Tunisia in 1943.

Preparing for this scenario took a little time, as the positions were prepared and pyrotechnic charges laid. The participating re-enactors had all been briefed and began moving into position with the Americans holding the ridge in the main arena. The Germans entered and were positioned on the low-ground. Of the British, there was not a sign at this stage of proceedings. According to the show guide, the grand finale battle was to be “…loosely based on the events…” which led up to the capture of the museum’s Tiger tank. Once everything was in place we only had to wait for the word to be given for battle to commence.

To support their campaign in North Africa, the Germans sent two battalions of Tiger I tanks to the theatre of operations between November 1942 and March 1943. One of the tanks serving with the 504 Schwere Heeres Panzerabteilung (army heavy tank battalion) had the unit number ‘131’ and arrived in Tunisia probably between early March and April 1943. Along with other tanks it was sent into action on 21st April 1943 at Medjez-el-Bab, where it encountered three Churchill tanks of No.4 Troop, A Squadron of the 48th Royal Tank Regiment, commanded by Lieutenant Peter Gudgin. A fierce engagement followed, during which Lt. Gudgin’s tank was destroyed and all the crew were wounded. One man later died of his wounds. The two remaining Churchill tanks continued to return fire and one made a chance hit on the underside of the barrel of the Tiger tank’s 88mm gun, the shell ricocheted off to jam in the space between the hull and the turret thereby disabling it. With the turret jammed, the crew evacuated the vehicle, which was abandoned, and otherwise intact, on the battlefield.

Following the battle, the area was consolidated and the ‘knocked out’ Tiger was captured. It was recovered from the battlefield by the 104 Army Tank Workshops of the Royal Electrical and Mechanical Engineers and the 25th Tank Brigade Workshops of the REME. It was removed back to Tunis on 24th May 1943, having only been in the theatre of operations for barely two-months.

On 2nd June the Prime Minister Winston Churchill and Anthony Eden inspected it and on 18th June King George VI visited the area and took a keen interest in the Tiger. It was then decided to take it back to Britain as an exhibit where it was displayed briefly at Horse Guards Parade in London. After the war it became part of the Tank Museum’s collection at Bovington. Following much hard work, the Tiger is today the only running example of its kind in the world.

Tanks for the memories

Obviously there was no way such a historical incident could be recreated, but the Tank Museum gave it a very good shot; excuse the pun! The Tiger and a Panzer III were driven into the arena, joined by three Shermans, Fury, Lucy Sue and Old Phyllis, all of which had starred in the film Fury together. They took up pre-designated positions and battle commenced. Pyrotechnics were detonated as a sequence to simulate a ground attack by a Curtiss P-40 ‘Warhawk’, which gave a fly past display. Armed with six .50-inch calibre machine guns, this was a role in which it was ideally suited to serve during the war. The Germans attacked and, after defending their positions for a short time, the Americans fell back and withdrew. The Germans, mainly parachute troops, took up position and readied themselves for the counterattack. This was put in by the British who, for a change, saved the day and won the battle. This was an opportunity for the WWII vehicles to be put through their paces and it all looked very good. The Tiger was captured and the way open for the Allied victory in North Africa.

After such thundering displays it was an anti-climax to find that Tankfest weekend was over for another year, but everybody was more than satisfied with the result. The staff at the Tank Museum had done another great job and I would like to extend my thanks to all of them for being such marvellous hosts. All that remains is to announce that next year’s Tankfest will be held over the weekend of 24-25 June 2017. There are plenty of other events at the Tank Museum for the rest of this year and news of a special ‘Tiger Tank Exhibition’ opening in 2017 has been released by the museum.