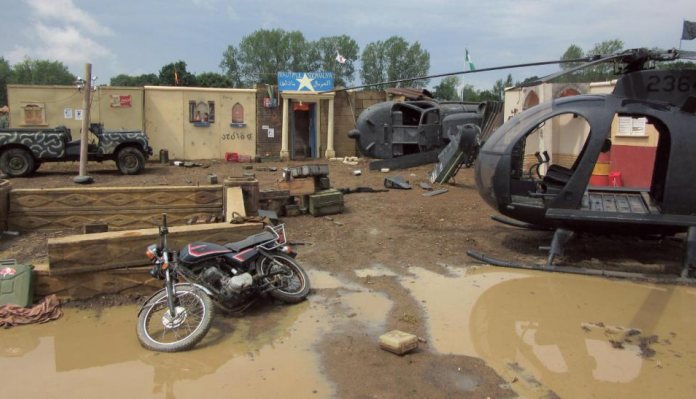 It may not have escaped your notice, but we seem to have been going through somewhat of a “warm spell” and this year saw the temperature climbing and climbing even further for “War & Peace Week” this year! The War & Peace Revival or simply “W&P” as most of us refer to it, for me is a massively social event, and given its standing as probably the biggest event of its kind in Europe, it’s a show that brings friends from all corners of the UK and further afield to my home county of Kent. Not only are there huge displays of tanks, armoured and soft-skin vehicles (the biggest gathering in Europe or so they say!), but there are also some excellent static living history areas that give a real insight into the “Soldiers Lot” from WWI. WWI, through Vietnam into the Cold War and even some that bring things bang up to date “modern day”.

If you’re an enthusiast of things military then W&P is most certainly worth the effort, even though the ticket prices do seem to rise inexorably! The Hop Farm is not the easiest place to get to, but once you left the M20 this year the organisers really had things nailed as there were no major tailbacks on the access road, and parking was an absolute doddle. When you do get into the show though, all the pains of the journey and the ticket price will seem 100% worthwhile as the vehicle owners and exhibitors put massive effort into their vehicles, equipment and uniforms to ensure that as much as humanly possible is totally period correct, so if you’re in need of inspiration, or need reference pictures for a project this is most definitely the show to visit!

To recap for those that are unfamiliar with the War & Peace Revival it’s a five-day military and vintage festival that is packed full of education and entertainment. Visitors to W&P will be able to catch up with friends while watching the incredible action-packed battle re-enactments; these are not just groups of people running around playing soldiers but full-scale choreographed battles that give you a taste of the action with blank firers and heaps of pyro helping to create some absolutely amazing spectacles! You’ll also find some superb entertainment, both up to date and more period, and I have to admit really enjoying the Jive Demos and the swing numbers.

The Living History encampments are superbly impressive too and provide a unique picture of life in conflict with depictions from WW1 to the present day; you can see the British “squaddies” living in trenches and “bashas”, GIs in Vietnam with their “tracks” and helicopters, Russians relaxing with an accordion after a hard day in Afghanistan, or “Rhodies” on patrol. If you’re really lucky you can even get a ride in one of the vehicles!

Aside from visiting some excellent reenactment groups like Three Sixty History and their award winning Black Hawk Down display, Modern Forces who this year had their usual excellent “Nam” display and a number of new groups who had gone to town on more “modern” Cold War themes I spent most of my time ogling military vehicles of all shapes and sizes; at W&P you will see pretty much everything from folding bicycles made for paratroopers to the largest of Main Battle Tanks, from mine resistant trucks to amphibious jeeps and everything in between!

As usual one of the highlights for me is the traders’ area, with massive marquees like that of Soldier of Fortune down to the small lean-tos of the one-man bands with their splendid “rummage piles” of gear. The number of stands appeared to be up again from last year, but many of the traders from across the channel really seem to be charging top dollar for their wares; I still think W&P is a great place to pick up some super bargains if you know what you’re looking for, and boy, do I like to find a bargain, but I have to admit that this year I came away with only a few reference books and a couple of lovely little WWII models for my tabletop wargames!

No War & Peace for me would be complete without visiting the stand of Cold War Collectables for AK parts, even if we did have to wake Jip up when we got there, and the sheer number of quality De-Acts and parts for sale was staggering! I had a chance to get together with other members of my airsoft OPFOR group, and there was also a meeting which took place that gathered a number of seasoned MilSim players in one place at one time, and I have to say I was really thrilled by some of the new ideas I heard being discussed.

I said earlier The Hop Farm is a bit of a faff to get to, but the 2019 show was obviously a huge success and clearly indicates that W&P is definitely here to stay; a high point for me is undoubtedly the Spitfire fly-by which is so evocative of the Battle of Britain, and this year I was not disappointed once I heard the sound of those Merlin engines resounded around the entire showground!

Next year’s War & Peace Revival looks to be scheduled for 28th July -1st August 2020 at The Hop Farm Family Park, Maidstone Road, Paddock Wood, Kent, and I hope to see you there!