A fort with a View - Dartmouth Castle 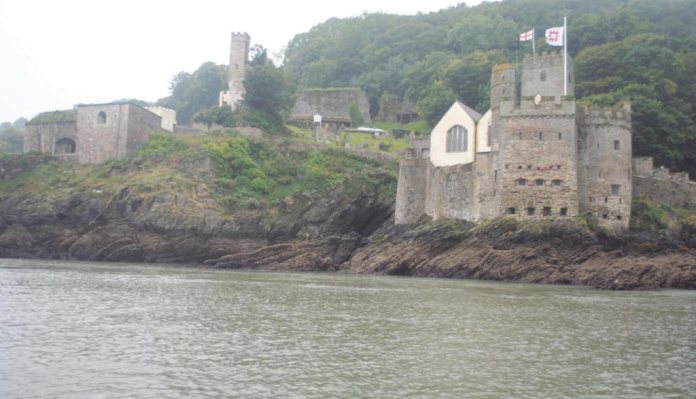 The River Dart in Devon has long-been an important anchorage for the Royal Navy and as such it has been protected by defences, which had to evolve and develop to keep pace with changes over the centuries. The long, narrow approach along the waterway from the sea to the sheltered mooring was defended from the elevated heights on either side of the river. The first permanent fortification to be built here was known as ‘fortalice’ established by John Hawley, the town mayor, in 1388. Among its weaponry, were some stone-throwing catapult-type artillery and perhaps some early gunpowder cannon.

Through the remainder of the 14th Century and during periods in the 15th Century, the defences overlooking the River Dart were continually being improved and strengthened with more weapons, especially more powerful cannon. From its vantage point on the west bank of the river, the location commanded the entrance to the waterway. It was during the reign of King Henry VIII, however, that the location began to take the form of a purpose-built platform for artillery, with the construction of three new gun batteries. At the end of the 16th Century, it was recorded that the fort had 24 cannons and 50 men as the garrison for the site of what we today know as Dartmouth Castle.

During the English Civil War, Dartmouth Castle and the town were attacked by Prince Rupert in 1643 and captured for the King’s Royalist Army. Three years later, in 1646, it was the turn of Sir Thomas Fairfax to attack and succeeded in capturing the town and castle for Parliament after an exchange of artillery. Following the Civil War, and throughout the 18th Century, the castle’s defences began to fall into decline. Fortunately, the dereliction was redressed in 1748, when new positions were built for the siting of 12 new pieces of artillery. By now, though, the Royal Navy was using the facilities at Plymouth, which offered a much larger base for operations and Dartmouth became very much secondary in importance. Even throughout the Napoleonic Wars, the castle was very low in priority and in 1820 it was reported how it was ‘…not spacious, and mounts few guns…’.

Thirty years later, and with war between France and Britain once again a distinct possibility, as the two countries entered an arms race, the defences at Dartmouth were improved and strengthened. In the intervening period, gunnery at sea and coastal artillery had improved greatly in both power and range. New guns were installed and new positions, known as the ‘Grand Battery’, were built at the castle and a trained garrison of gunners was installed with accommodation for their daily routine. Even so, the naval facilities at Dartmouth remained rated as very low.

By the turn of the 19th Century, the defences were being allowed to run down and in 1909 the castle was in danger of becoming a curiosity for tourists to visit. All that changed with the outbreak of the First World War and the need to protect the anchorage saw the installation of two QF guns, but in the event, they were never fired in anger. The fortunes of Dartmouth Castle returned during WWII and a pair of 4.7-inch guns were mounted in concrete positions and troops stationed in nearby facilities.

Today, exactly 630 years this year after the first permanent defences were built there, Dartmouth Castle is in the care of English Heritage, which maintains the fabric of this site with its important military architecture, which spans more than six centuries. It is open to the public and there is much to see, such as the impressive view from the top of the Gun Tower, which shows the commanding field of fire, so vital for good gunnery. There is also the ‘Old Battery’, dating from 1861, and traces of the even-older original defensive ditch and walls rising to 23-feet in height and a thickness of over seven-feet.

For a small castle its history spans many of the ‘key moments’ in British military history, from the time of the Hundred Years War, the Spanish Armada of 1588, the English Civil War, the wars with France, through the Victorian era and both world wars. Visitors today can see examples of the earliest forms of artillery on displays and there are two impressive heavy guns dating from 1891, which could fire shells weighing 64-pounds out to a range of over two miles to engage approaching enemy warships.

Enthusiasts of military architecture will be thrilled to see the transition from early gunpowder weapons to the more powerful weapons of WWII. From the ramparts to the gun ports, it is impression of the commanding view which visitors take away with them. Indeed, from this vantage point, it is easy to understand why the castle was built in this location. Wandering around the site, visitors can see living accommodation for the troops, guns in their firing positions and whole wealth of other history.

Access on site is limited unfortunately for those visitors who have special requirements and some parts of the castle have very narrow and steep spiral stairs. Nearby car parking is also limited in space but parking on the street-side is possible. The on-site shop offers a range of products including books with related titles, which are of interest. The site re-opened on the 30th of March this year and hosts some events during the season. For details of these, along with opening times and other facilities available on site, visit the Website at: www.english-heritage.org.uk/visit/places/dartmouth-castle.