A Most Unusual Museum 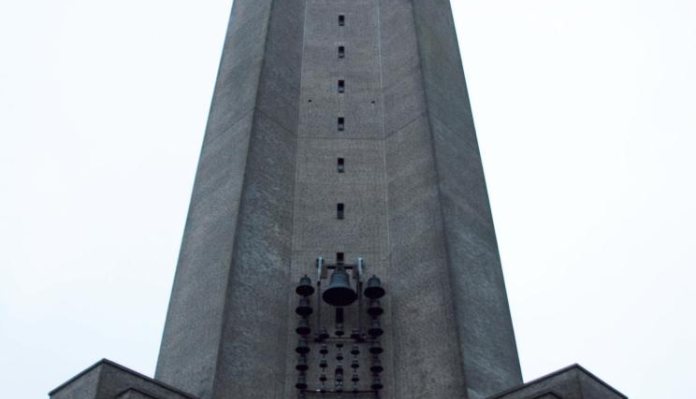 Museums dealing with the subject of military history are to be found in all shapes and sizes around the world. Some are small, dealing with a specific regiment or historical figure, such as the Admiral Blake Museum in Bridgwater, Somerset, whilst others are more grand affairs, such as the Imperial War Museum at Lambeth in London, which covers many subjects. The most unusual design by far has to be that of the Museum Aan de Ijzer in Belgium with its magnificent tower rising above the nearby town of Diksmuide.

The architectural design of the museum makes it prominent, but it is the entire exhibition, comprising of a series of fascinating and highly informative displays, laid out over each of its 22 floors focusing on different aspects of the First World War, which sets it aside from all other museums.

Work on the present museum was started in 1951 and inaugurated in 1965 to produce a purpose-built memorial to house artefacts from WWI and to serve as a tribute to those who fought in the conflict. Standing an impressive 275-feet in height, the tower, with its slight tapering appearance and cruciform shape, has to be the tallest military museum in the world. It recently underwent an extensive renovation programme and reopened in 2014.

Entering the museum there is an exhibition of life-sized dioramas on the ground floor, but for the best experience it is recommended to start at the beginning and follow the timeline to fully appreciate each of the displays in turn. In order to do that, you have to take the lift to the very top floor. On exiting the lift you come out into an open space lined with windows on all sides to give a panoramic view across the countryside. Today it is peaceful, but between 1914 and 1918, if you had looked at this view you would have been gazing across the battlefields where the Belgian and German armies faced each other. When the weather is fine it is possible to climb even higher onto the roof for an uninterrupted view which offers an even better understanding of a time when more than 90% of Belgium was under German occupation.

Starting at the top the exhibition, here details the situation in Europe in 1914 and the events which led to the outbreak of war. It may be familiar to many people, but this is different because it was Germany’s invasion of Belgium which led to Britain’s intervention in the conflict. Photographs, maps and captions feature throughout, along with artefacts to produce a vivid look at life in the country in 1914. Walking through the exhibition you are directed to stairs leading down to the next floor which continues as an unbroken timeline and takes you to the next part of the display.

Each floor is well laid out and full of artefacts, ranging from personal items through to the general items issued to the troops, along with some surprises such a gigantic artillery shells. Much of the exhibition concentrates on the war, which is only to be expected given that the town of Diksmuide was right in the Front Line. Weapons, uniforms, items of kit and other equipment are among the more usual items; but go to another floor and the scene is different.

On one level, a trench scene is recreated which visitors can walk through to get a sense of being. The aim of the museum is described as “…not the history of war itself but the perception of history”, which it does very well with personal stories from soldiers of all sides, including civilians. At one stage you descend the stairs where the walls are clad in wooden planks to give the impression of walking into an underground dug-out. As you walk through you see the living conditions with bunk beds, tables, subdued lighting and life-size manikins. The subterranean theme continues with a display on tunnelling in order to place explosives beneath German lines to destroy their positions.

For those interested in collecting, the display of medals is very informative with Belgian awards featuring prominently, but also other Allied awards. One display case relates the storey of two remarkable ladies, Mairie Chisholm and Elsie Knocker, who rendered nursing services to the Belgians around the town of Pervyse. They faced all manner of dangers, including being gassed, and were highly respected by both the Belgians and the Germans alike.

The First World War is often seen as being fought between Britain and France against Germany, but here visitors are reminded that the Belgian army held parts of the front line and fought in offensives.

Obviously, the time spent in the museum depends on the individual, but the suggested minimum length spent on site will be around three hours. It is, of course, possible to spend longer. Outside there is a small wooden hut which has been restored and preserved to show what Belgian refugees had to live in after the war. This is an all-inclusive experience covering the war from all points of view and reminds visitors how much Belgium suffered in the First World War.

Full details of opening times, location and facilities on site can all be found at the website: museumaandeijzer.be.