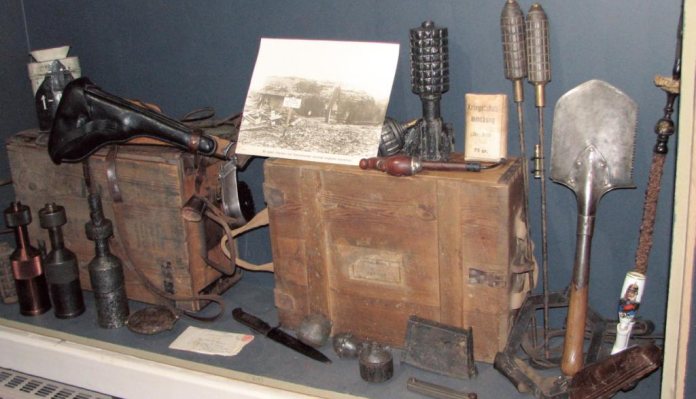 It is not often that the opportunity presents itself to visit a new museum before it is completed and ready to open. However, that is exactly what happened to me just before Christmas, when licensed firearms dealer, Barry Bromley, invited me along to view development of his project called ‘Barry Bromley’s Classic Firearms Museum’, the BBCFM, based in Heuvelland in Belgium.

Barry is a passionate collector of firearms of many years standing and has a life-long interest in military history. This is just as well, because the grounds where his house and other buildings now stand was once part of the Flanders battlefields during the fighting of WWI. It was particularly important during the German offensive of ‘Operation Georgette’ in spring 1918, as they tried to seize the strategic heights of Kemmelberg.

Many of the weapons in Barry’s extensive collection, including items of militaria and other artefacts of historical importance, have a story attached to them and most of his weapons have impeccable provenance to support their historical significance. As his collection grew, he was faced with a dilemma as to where it should go next. The answer came to him and he was inspired to establish a small museum, using his private collection, which is housed in a converted part of the property. Here he can welcome small groups of enthusiasts and, with its historical connections to WWI in the surrounding area, it makes the perfect setting

The property is not large and, unlike the big museums which become inundated with big groups, the BBCFM caters for small groups of visitors. That way, Barry can provide a personal service with conducted tours around the collection and allows him to explain various items and answer questions. Under supervision, visitors may be given the chance to handle some items, which is something the large, commercial museums cannot offer. His charming partner, Debbie Swift, provides refreshments in a superb tea room, where visitors can enjoy delicious homemade cakes, in a comfortable building adjacent to the museum collection.

Barry explained to me that it is his intention to have the museum open for public visits in March this year. At the time of my visit, he was very advanced with his preparations, with many items already in their display cases. For example, the Webley-Fosbery revolver, as carried by Major William Congreve, who served with the Rifle Brigade and whose actions whilst serving at Longueval between 6 and 20 July 1916, led to him being awarded a posthumous Victoria Cross. This is just one exhibit out of many, which span a timeline from 1800 to 1914, which includes many unique and fascinating weapons and other items.

There are further surprises also, because, apart from the museum display, visitors can purchase collectables such as books, militaria and weapons, including pistols and revolvers, provided they have the correct paperwork. The area surrounding Barry’s property was fiercely fought over during WWI and he has studied and researched the battles which raged across the countryside. This has allowed him to build up an in-depth knowledge and he can offer battlefield tours around the area as an adjunct to his display of his museum.

As a licensed firearms dealer, Barry can provide specialist gunsmithing services for shooters, such as woodwork for stocks on shotguns and rifles, barrels and complete overhauling and restoration. Visitors who travel on his battlefield tours are offered the chance to live fire some historic weapons, such as rifles, on his facilities. This is a rare opportunity and one which any weapons enthusiast will find too good to miss. Even better, though, is the offer of a complete package, which includes being personally driven around the battlefields by Barry, firing historic weapons and visiting a unique collection of firearms. It just makes perfect sense to take advantage of such a package.

Further details of the facilities available from the BBCFM museum can be found on the Website, though which Barry can be contacted to answer any queries, along with booking a visit and times and dates of opening. Tours to the battlefields of Belgium around Ypres are very popular all year round and a trip to the BBCFC museum would only compliment it and turn a memorable visit into an unforgettable experience. But don’t just take my word for it, check out the website at: bbcfm.be and find out for yourselves what a warm and friendly welcome awaits you.