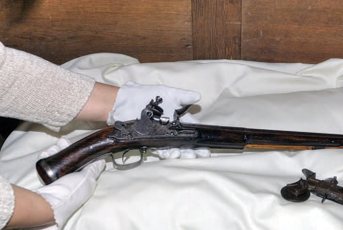 The seasonal pastime of game shooting on a great estate is a world away for many people, but some estates are nowopen to the public to discover what such an event entailed. At the National Trust property of Dunster Castle in north-west Somerset, staff are in the process of restoring the gun room to its former condition to a time when it was used for shooting weekends in the late 19th century. The site has been fortiﬁed for over a thousand years and the present castle can be traced back to the Norman Conquest when it was begun by William de Mohun. In the 14th century it passed to the Luttrell family who owned it until 1976 when Colonel Sir Walter Luttrell KCVO MC JP passed it over to the National Trust.

Over the centuries the castle has evolved and by the 19th century it had been transformed into a country estate of around 15,000 acres with pastures and woodland which were ideal for shooting parties. The Gun Room, as the title suggests, was where all the sporting guns were kept, including those of the guests invited along for the sport. The gamekeeper lived in a nearby cottage, which is still in existence, and his duties included stocking the grounds of the estate with suitable birds and there were also deer which required managing. Vermin also had to be controlled to protect the valuable game birds.

At the height of the Victorian period Dunster Castle had been transformed into a country gentleman’s residence and some of the grounds had been landscaped into formal gardens. Many famous and inﬂuential ﬁgures were invited along by the Luttrell family to enjoy this setting and spend time shooting and ﬁshing. On arrival their baggage was taken in through a side door into the gun room from where the staff carried it along the passages and stairways to the guests’ rooms. The guns remained in the gun room which was secured by stout doors. In here all the accoutrements and cartridges were also stored.

It has been many years since the last shooting party was organised on the estate but it is possible to imagine how it must have been in the Victorian period. The room itself remains as it was in the 19th century. It is quite spacious and is lit by a large window through which natural light ﬂoods. It has a high ceiling and during its use as a gun room the walls would have been lined with shelves and racks for storage.

The gamekeeper would have typically drawn up a plan for the day’s shoot and staff would have taken the guests’ shotguns out to waiting carriages along with cartridges and provisions for a comfortable day’s shoot. Beaters, usually members of staff working on the grounds of the estate, were used to drive the birds onto the guns. At the end of the day everything was returned to the gun room and the birds were taken away to be hung in a separate room until they were ready to be used by the kitchen. The guns would have been cleaned by staff and placed in the racks in readiness for the next day’s sport.

I learned that the gun room was being re-opened to the public for the 2013 visitor season and the House Manager at Dunster Castle, David Moore, kindly invited me along to see the progress being made on the restoration project. The ﬁrst thing one sees on entering is a very large wooden tall boy/wardrobe, previously owned by the Luttrell family, which has been converted into a gun cabinet.

The cabinet is ﬁtted with full doors and the upper portion holds nine shotguns to show typical weapons used on the estate shoots. These display items are of the period but nothing of great rarity or value. The lower part of the cabinet is used to display a ﬁne pair of 17th century ﬂintlock pistols which were recently returned to the castle. These valuable weapons are displayed along with a device to test the strength of the powder and pistol balls which have been specially cast by a re-enactor to show the calibre of projectile the pistols ﬁred. A box for Ely shotgun cartridges is displayed and a leather shooting case which was specially made for the Luttrells is also on display. This item was in storage and staff retrieved it for the restoration project to show how a country gentleman would go equipped for a day’s shooting. His valet would have ensured everything was packed for his master’s comfort.

During the English Civil War the castle had its own armoury with a number of muskets and whilst many have become scattered over the years, today some of these are still in the castle. David Moore hopes that more weapons of this period can be obtained and the intention is to put these on display in the gun room when the site reopens for visitors on 9 March 2013. A shotgun of the 19th century is displayed for handling by the public and this is secured to the wall by a safety chain. This allows visitors to see exactly the kind of shotgun used for the organised shoots. Some guests and certainly the Luttrells would have had their personal weapons specially made for them as beﬁtted their status.

David Moore explained the restoration project is very much a work still in progress and there remains a lot more work to do. Modern ﬁxtures and ﬁttings will be removed and the gun racks lining the wall are to be replaced. Some ‘trophy’ heads of stag and foxes will be hung in the gun room to keep the theme of shooting in context.

The gun room may be a relatively small part of a huge residence but it is signiﬁcant in being integral to the main house. Standing in the room one can imagine the amount of time put into the preparations for a shoot and seeing all that went with such an event and it will be like stepping back in time. It is a very worthwhile project and one which will enhance an important and already popular site in the National Trust catalogue. We would like to thank David Moore and John Lax, Visitor Services Manager at Dunster Castle, and also the National Trust staff for being attentive hosts.

Dunster Castle at Minehead, North Devon has a long history but the period of the 17th century was particularly signiﬁcant when the castle’s owner Francis Luttrell commanded the local militia. It was also here that the Green Howards Regiment was raised in 1688. The castle also hosts a range of re-enactment displays throughout the year, mainly themed towards English Civil War. During WW II American troops were billeted in the grounds of the castle. For dates of these events, opening times and other information about the site telephone 01643 821314 or visit www.nationaltrust.or.uk/dunstercastle GM