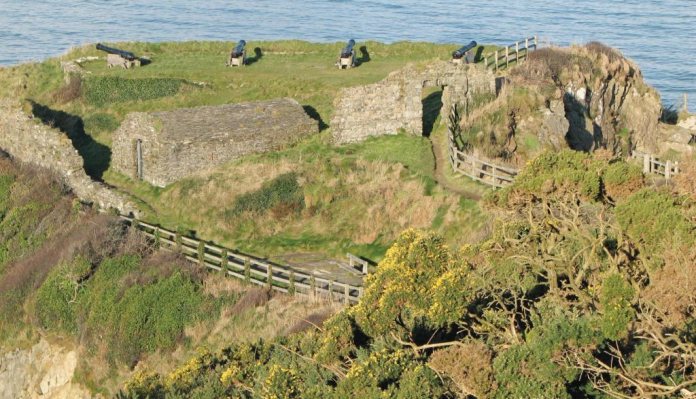 Defensive positions from all periods can be found around the coast of Britain, from Medieval castles to Tudor forts, so-called ‘Palmerstone Forts’ from the 19th Century and up to both world wars. They are usually built at strategic points to protect harbours, with many being obvious, such as Dover Castle in Kent and Hurst Castle on the Hampshire coast. One of the less well-known sites can be found off the A487 as you drive towards the port of Fishguard in Pembrokeshire, Wales. It is easy to drive past this small, isolated fort, yet, it is well worth seeing an 18th Century coastal defensive position.

To understand why it was built where it is we must go back to 1779 when Britain and France were at war. A French ‘Privateer’ vessel called the Black Prince sailed into Fishguard Bay and the captain demanded the town pay a ransom of £1,000 to prevent being attacked and to secure the release of a local ship which had been captured. The Captain probably chose to attack Fishguard because he believed it to be an easy target. The town refused to pay the ransom demand so the Black Prince opened fire. The bombardment was brief, but several buildings were damaged. Having made their point, the French sailed away.

Tucked away well down into Cardigan Bay, Fishguard in the 18th Century was a prosperous port and its protection was considered to be important to the local economy and the trade routes to Ireland. In 1781 it was decided to build a defensive position where a battery of artillery could be sited to protect the town and guard the approaches to the harbour in the event of another attack. Lord Lieutenant Sir Hugh Owen, a wealthy local landowner, provided the money to cover the cost of its construction.

The ground was levelled in preparation for the construction of the defences, which included ramparts built using local stone and earth excavated during the course of the work. A protective wall was built on the landward side to defend the rear of the position and part of this with the gateway is still to be seen today. The building on the site was stout and rather compact, with a pitched roof, constructed using local stone. Its primary purpose was to store the powder and shot for the guns but it also provided shelter for the troops during sentry duty. However, most of the time the troops would have been billeted with local households which lay only a short distance away. The troops could transport supplies of food and water from the town to the site quite easily. The upkeep, powder and shot were paid for by the town’s population.

The Board of Ordnance supplied eight pieces of muzzle-loaded artillery rated as 9-pounder cannons for the defences, with three gunners being provided from Woolwich in London. Additional troops were provided by a local force of volunteers known as the Fishguard Fencibles, which would have provided sufficient men to form the crews of the eight guns. Fencible troops were volunteers, usually serving on half-pay raised for the duration of an emergency by lord-lieutenants of a county. They were a form of Yeomanry force but could be called on to serve outside their own county if needed.

The volunteers would have been trained in their duties by the gunners from Woolwich and they would be required to turn out in response to a threat. Two years had passed since the Black Prince incident and now the town had its own fortification which also served as the headquarters for the unit and where the Fencible troops could drill. The site did not have high ramparts but from its elevated position it had a commanding view over the bay from where the guns would have had an uninterrupted field of fire on their wooden carriages. Each gun weighed around 1.5 tons and had an effective range of about 1,000 yards. The round iron shot was capable of inflicting severe damage on most wooden warships of the day.

On the 22nd February 1797, an invading French force was spotted approaching. The gun crews paraded to their duty, despite the prolonged period of inactivity, and alarm guns were fired from the fort. It is not known precisely if the guns at Fishguard fired in anger during the French invasion of 1797 but some sources contend that at least one gun may have fired at least one shot at the French vessels as they approached. Probably wishing to avoid an exchange of fire the French decided to withdraw about two or three miles further west along the coast to land at Carregwasted Point, where the headland screened them from the fort.

The invading force of 1,400 men was known as La Legion Noir (The Black Legion). The troops climbed the steep rock face and using ropes they managed to bring up all their stores which included 47 barrels of powder, fifty tons of stores and a couple of pieces of artillery. At Fishguard Fort, the Fencibles were withdrawn and took no further part in the action. For three days after their landing, the French engaged themselves in localised plundering but without reinforcements, they forced to surrender. The terms were agreed and the document signed in a building in the town. It can be visited today during opening hours because it is a public house called the Royal Oak.

Over 140 years later, during WWII, the site of Fishguard Fort was a lookout point. It was equipped with two Lewis machine guns and a searchlight. Today it is in the care of the Pembrokeshire Coast National Park Authority and with car parking facilities close by, it can accessed on foot. There are four cannons at the fort to show how it would have looked in the 18th Century. In the nearby town leaflets are available to guide visitors on a walk of the battlefield route to take in all the salient points of the ‘Last Invasion of Britain’. Overall, an interesting place to take a look at.