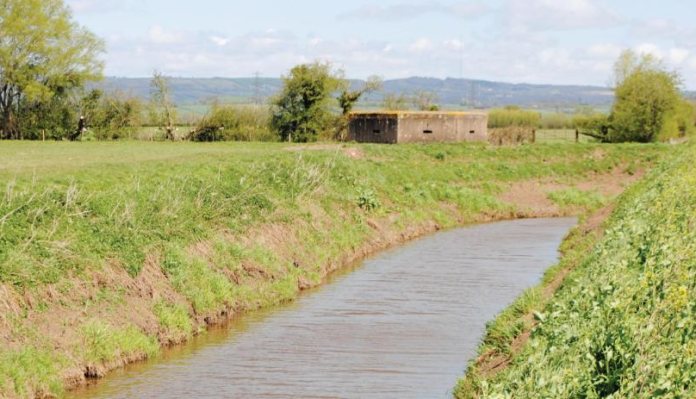 Following the withdrawal of the British Expeditionary Force from Dunkirk and the collapse of France in 1940, Britain faced the possible threat of a German invasion. With the surrender of Belgium and Holland, Britain stood alone. Defences were hurriedly constructed across the country, including a series known as Stoplines, which comprised of pillboxes designed to form a chain of mutually supporting positions. These Stoplines sometimes followed the route of a natural feature, such as a valley, to produce an extended front. Defences of this nature criss-crossed Britain during the war and were given official codenames to designate them. These Stoplines were the inland defences and were meant, in the event of an invasion, to allow troops in a particular area to engage the enemy in a defensive holding operation until reinforcements arrived.

Today, 80 years after they were built, the remains of these Stoplines can be seen across the country and are perfect for any military enthusiast to investigate. One of the best examples is the stretch known as the Highbridge to Meare Stopline which formed part of the Somerset section of the General Headquarters (GHQ) ‘Green Line’. Built using mainly Type 24 pillboxes, which were not perhaps the most exciting of pillbox designs, but the stretch of Stopline runs almost unbroken which makes it well worth the trip to investigate. The Type 24 pillboxes usually had a hexagonal foundation with an entrance at the rear and several firing slits for all-round defence. It was a simple design, easily constructed from brick and concrete, they were designed for an infantry section of seven or eight men to defend using rifles and machine guns. They were built in their thousands and are the most common type to be found across the country.

The western end of the Green Line is at the mouth of the River Brue near Highbridge, and extended over 90-miles in length, running eastwards past Bason Bridge to its junction with the Division Rhyne near Meare. From here it continued to Upper Godney and Coxley, skirted around the city of Wells, and headed towards Masbury. From this point It ran towards Radstock, following Wellow Brook, and extended to a point about six miles south-west of Gloucester, to form a semi-circular route which encompassed Bristol. When completed the Line contained over 300 pillboxes and command posts along with 21-miles of anti-tank ditches.

These Stoplines were constructed by a force of troops and civilian contractors between June 1940 and 1942. The stretch of line between Highbridge and Meare covered 12-miles with the pillboxes being built on the northern bank of the River Brue whose course the defences followed. For the purposes of exploration, the best map to use is the Ordnance Survey No 182 1:50,000 scale, covering the Weston-super-Mare; Bridgwater and Wells, which shows the location of the pillboxes and route of the watercourses and where footbridges are sited to cross them. This publication is the best to negotiate the area and it is suggested that one drives from one suggested point to another, getting out at the destination and walking as far as possible.

The suggested point to start investigating the Highbridge to Meare section of the Stopline is to begin from Glastonbury following the B3151 road towards Meare. On leaving the roundabout and entering the B3151 road, take the first turning right which is sign-posted Godney. This is an unclassified road, but suitable for traffic and, although narrow in places, there are passing places. Continue along this road for 2.7-miles until reaching a small bridge which crosses the River Brue. Park along the side of the road and standing on the bridge this is the River Brue. From the bridge pillboxes can be seen, the closest of which to the road would have controlled the route over the bridge and its firing embrasures would have provided a wide field of fire. After examining this construction continue to drive northwards and at the road junction other pillboxes can be seen in fields either side of the road.

Turn around and head back the way you came until you reach a ‘T’ junction with the B3151, turn right and continue towards Meare, driving through the village to reach Porter’s Hatch, a distance of 2.6-miles, which has limited parking. There is a sign for the Medieval Fish House, but walk down the road to the river and cross the bridge. Pass through the cattle gates and follow the footpath leading to the left across fields. This is taking you in the direction of the River Brue and on approaching it a small footbridge will be seen and the outline of another pillbox. Crossing over the footbridge puts you on the north bank of the river to access the pillbox. It is possible to enter, but using a torch reveals the interior conditions. Looking through the observation slits, facing south, the field of fire can be worked out and how each site overlapped with the adjacent pillboxes to present a wall of small arms fire to an enemy.

Return to the car and turn right, continuing along the B3151 towards Westhay a distance of two-miles. Pass over the bridge which spans the River Brue and short distance on the left-hand side there is a parking space. Leave the vehicle and walk back to the bridge. On either side there is a Type 24 pillbox which would have commanded the crossing point during the war. The defences running to the west at this point provide another opportunity to investigate the Line on foot because it is an unbroken stretch of about 2.5-miles and shows how the defences developed and incorporated the river as an obstacle.

The stretch of B3151 road from Glastonbury to Meare runs parallel with the River Brue and the defences which line its northern bank but separated at points by as much as several hundred yards of open countryside. By crossing the bridge at Westhay you have passed through the defences and follow the road to Wedmore. Entering the town pick up the B3139 road towards Blackford and Mark. Continue to follow this road until Watchfield where the road forks and follow the B3141. This route leads to Bason Bridge where more pillboxes of the Stopline can be seen as the road again crosses the River Brue. If you turn around and head back towards Watchfield, the road turns off to the left which is the B3139 heading to Highbridge. If this route is decided on, then one has arrived at the starting point of the Stopline and the length of the defensive Highbridge to Meare Stopline has been traversed.

It is an interesting little exercise to undertake, especially in the summer, and reveals something of the measures taken by the country at a time when this was all it had. The fact such evidence still remains is a testimony to the engineering skills of the time.