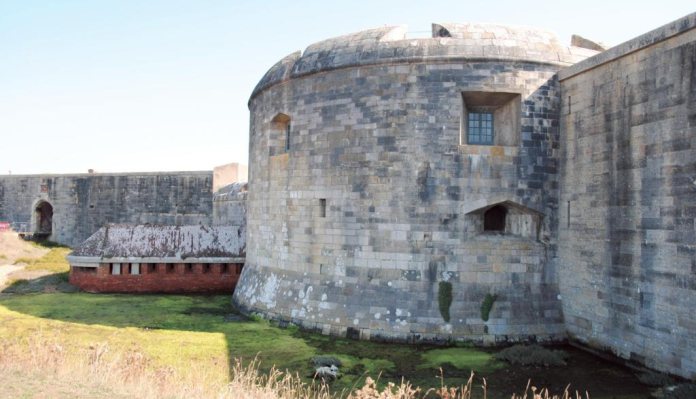 Britain is a country which has a huge variety of historical sites ranging from Roman forts, to concrete bunkers and nuclear bunkers of WWII and the ‘Cold War’. All are interesting sites to visit, but it is those defences which show how they developed to meet the changing face of warfare to keep pace with military styles and remain useful in the defence of the country. One of the most impressive examples which illustrates how defensive military architecture changed over the centuries is Hurst Castle, in Hampshire.

Built between 1541 and 1544 as an artillery fort during the reign of King Henry VIII, it remained in almost constant military service until 1956. During those 400 years it featured to some degree in episodes such as the Spanish Armada 1588, English Civil War, Anglo-Dutch Wars, Napoleonic Wars, both world wars, before ending at the beginning of the ‘Cold War’. Indeed, there can be few fortified locations which can equal such service.

Hurst Castle began its service life as a ‘gun platform’ in a similar style to that found at Portland Castle in Dorset. Over the years, like that location, it has come to be referred to as a ‘castle’, which students of military architecture will know is incorrect, but will understand how such a mistake has been allowed to creep in. Built at the tip of the Hurst Spit, a two-mile long shingle pathway which projects finger-like out into the Solent Strait, a stretch of water some 0.75-miles wide, which separates the Isle of Wight from the mainland putting it in the ideal position to defend the western end approaches to the waterway. With Calshot Castle, also a gun platform, covering the eastern end of the strait, and two other defensive positions built at East and West Cowes on the Isle of Wight, between them the four positions would have torn into any enemy ships foolish enough to venture into their fields of fire.

On completion, Hurst Castle had positions to allow for the siting of up to 71 pieces of artillery, but in 1547 records show it was armed with only 26 guns of varying size and several of which were not serviceable. In fact, far from being a ship killer, the castle was in a poor state of preparedness for war. In 1559 the garrison was greatly under strength and the quality of weaponry had deteriorated even further. Such was the degree of decay it could not even prevent ships operating from bases on the European coastline from raiding the British coast. Over the next 50 years things did not improve, until 1642 it was seized by Captain Richard Swanley who held it for Parliament during the English Civil War.

Whilst promising to be a formidable stronghold, Hurst had yet to exchange fire in anger. During 1648 the castle was used briefly as a temporary prison for King Charles I prior to his trial and sentence of execution. The Parliamentarian forces continued to hold the castle and improved its defences but after the Restoration of the monarchy in 1660 it fell back into decay. Things would not improve until 1794 when war broke out with France and new guns were installed. During this period, it remained well provisioned and maintained as a frontline defence in the event of an invasion.

By 1840 it was being armed with powerful modern artillery for which the structure had to be improved. By the 1880s rifled muzzle-loading pieces were installed and modern machinery to handle the new types of ammunition. Storage for ammunition was increased and more modern weapons installed, including machine guns and quick-firing guns which were adequate for service throughout the First World War. During WWII the castle was equipped with 40mm Bofors guns, 6-Pounder and 12-Pounder guns along with searchlights.

In 1953 the military left and in 1983 English Heritage took over responsibility for the maintenance of the site. In 1996 the Friends of Hurst Castle, FoHC, was established and together with English Heritage have transformed the fortunes of Hurst Castle which can be visited between March and October. The site is inaccessible by car, but there are two ways to get to the castle. For the energetic, there is the walk along the shingle spit. Alternatively, there is a short ferry boat ride from nearby Keyhaven which operates a regular service to and from the castle.

Whichever method is chosen, the journey is worthwhile because of the opportunity to explore 400 years of incredible military architecture and artillery. It is easy to lose track of time on site because there is so much to see, from a recreated Tudor gunroom to the last remaining stage used to give performances to the garrison by ENSA during WWII. Many of the rooms have been turned into display area, including one which houses an exhibition of militaria, weapons and medals. Some of the casemates still contain pieces of artillery including a 38-ton 12.5-inch calibre RML complete with all the accoutrements and tools for loading and firing. Shells which would have been fired show what a task it was for the gunners to operate the weapons.

It will take all-day to see everything from the deep tunnels once used to store ammunition in the Tudor defences, to the Victorian ammunition hoists and walk up to the concrete gun platforms of WWII. The best view is from the top of the Tudor keep which has at its base three bastions for artillery, built in a shape known as trefoil. From here it is possible to see the different styles which evolved over the centuries and how they were incorporated together. From here the view over the Solent towards the Isle of Wight demonstrates the strategic importance of the waterway.

This is very much an emersion site, and just when you think you have seen everything, turn another corner and there is more. Indeed, whatever your interest, be it military history, architecture, weaponry or the life of soldiers. When you step through the gates at Hurst you are presented with over four centuries of history. It may sound cliched, but this really is a true hidden gem with something for everyone. English Heritage and FoHC are working together to develop further displays and information boards to enhance and continue to build on what they have already achieved.

If you are looking to visit somewhere different this year, then make your destination Hurst Castle, because you will not be disappointed. I have been to many places but nothing like this and I will certainly be returning. For details of map location, times and dates of opening and details of the ferry service it is advised to visit the Website of either English Heritage or the FoHC at: english-heritage.org.uk or hurstcastle.co.uk.