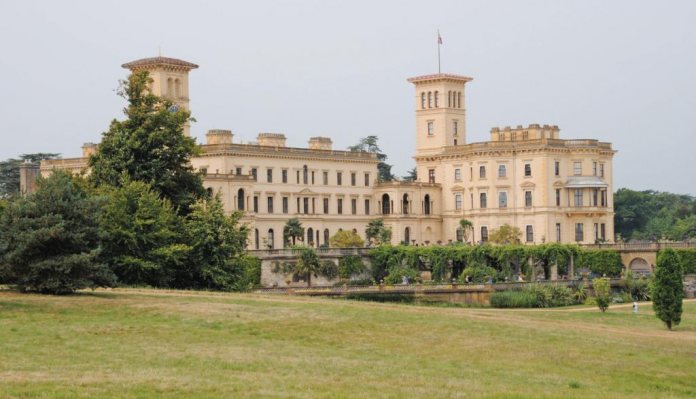 The Isle of Wight is a popular tourist destination for tourists and getting there is simply a question of booking a ticket for a ferry to take you over the short stretch of water. Once on the island there is something for everyone and all interests, including enthusiasts of military history. Name the period and the Isle of Wight has it, from Roman to both World Wars.

The island has always been popular with figures of state, celebrities and military figures, but perhaps the most famous person to take up residence on the island was Queen Victoria when she acquired Osborne House in East Cowes. It was built between 1845 and 1851, replacing a smaller property which stood on the site for use by her and Prince Albert as a summer house and a place of ‘escape’ to get away from the affairs of state. It remained one of her most popular residences and it was here she died on 22 January 1901. In 1954 Queen Elizabeth opened it to the public and in 1986 English Heritage took over management of the site and today is responsible for the care and maintenance of the property.

A visit to Osborne House is much more than a trip to see a grandiloquent residence it is to walk around a place which you know has been the backdrop against which historical events unfolded. More recently, because of its versatility, it has been used as a film location for productions such as the 1997 film ‘Mrs Brown’ and in 2017 for ‘Victoria and Abdul’ both of which starred Judi Dench in the role of Queen Victoria, making her, in a sense, a re-enactor.

As a family residence, Victoria’s children would accompany her during her visits to Osborne House. Naturally, like any family, they required entertaining. However, unlike an ordinary family, the children’s playthings were anything but ordinary. Examples of this extravagance can be seen during a visit, such as the ‘Swiss Cottage’, a full-sized wooden building complete with fully functioning kitchen and sets of crockery.

With a close connection to the military it was only right that the boys should have something to play with which had an army theme. In 1856, just after the Crimean War, two of Victoria’s sons, the Princes Albert and Alfred, helped in the building of Victoria Fort to which was later added Albert Barracks in 1860. The perfectly detailed scale fort and barracks were designed by Lieutenant Cowell of the Royal Engineers, who served as Prince Albert’s governor, and includes defences in use at the time, including ditches and earth ramparts. Today it is possible to see this structure in the garden where the princes played and helped develop their interest in the military.

Walking down the corridors of the house, with so much fine artwork, and along the pathways through the gardens is to know you are walking in the footsteps of historical figures. Prime Ministers such as Palmerston and Disraeli visited to discuss affairs of state and luminaries were invited to demonstrate the latest inventions, such as Alexander Graham Bell and his telephone. These were some of the good and great, but there were also the bad. Victoria’s grandson, Kaiser Wilhelm II, who would lead Germany to war against Britain in 1914, not only visited Osborne House, he was present with the queen when she died in 1901.

In the years following her death, the property would be put to use for several different purposes. In 1902 it was presented to the nation by King Edward VIII and the following year parts of the estate formed the establishment of the Royal Naval College, Osborne. Among those naval cadets to pass through its doors were some of Queen Victoria’s great-grandsons, including the princes Edward and George, who would be crowned King George VI, and also George, Duke of Kent. The college finally closed its doors in 1921 and today there is little evidence of such an establishment having been within the grounds.

During the First World War some of the secondary wings of Osborne House were turned into a convalescent home for officers recovering from wounds. Among the many officers to pass through the doors were several notable literary figures, including Robert Graves, war poet and author of such works as ‘Goodbye to All That’, who, whilst serving as a Captain in the Royal Welch Fusiliers was severely wounded during the Battle of the Somme in 1916. Another patient was A.A. Milne who was a Lieutenant with the Royal Warwickshire Regiment and had also been wounded during the Battle of the Somme. Milne was a prolific writer, but is best known for his series of children’s books featuring Winnie the Pooh. The military medical wing continued in operation throughout WWII and into the post-war years.

Wandering around the welltended gardens today, which were established by the head gardener Ernest Johnson who was killed during WWI in November 1917, and inside the house is to step into another world. It gives a glimpse of life during Queen Victoria’s reign and is far removed from the daily lifestyle of many of her subjects. Nevertheless, it is fascinating to visit from the social history point of view for its contrasts. The site has played host to a range of re-enactment events including displays presented by the Diehards who depict the Victorian army with minute attention to detail in uniform and standards of drill. These displays truly bring the house and gardens to life to evoke a bygone age.

The house and grounds are open throughout the year, but opening times change during the winter months. Some parts of the grounds are occasionally closed for maintenance work. There is full wheelchair access, a shop stocks a range of books and refreshments are available. For times of opening it is best to check in advance of visiting by going to the Website and accessing the Osborne House webpage at: english-heritage.org.uk.