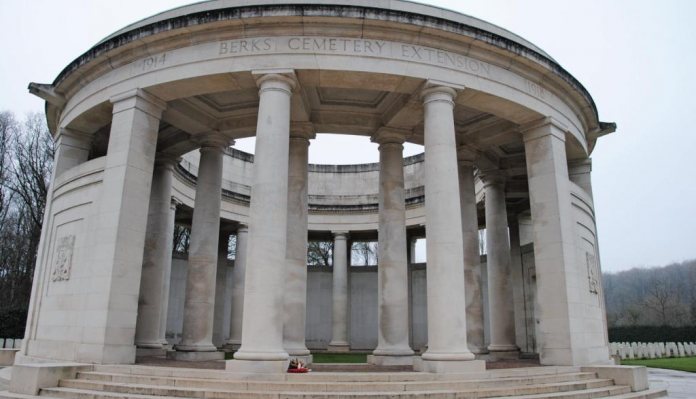 Between 1914 and 1918 the trench lines dividing the Allied and German armies developed to extend from the Belgian coast (north) to the Swiss border (south). This became known as the Western Front and along its length, hundreds of French and Belgian communities found themselves either on the front line or very close to the fighting. During four years of war, many were destroyed, such as Messines, Verdun and Albert. When peace was restored, the communities of these villages and towns returned to rebuild their lives.

Many of those communities have erected memorials and some, such as Messines, have developed their own local museums to tell the story of their ordeal and survival. One town which suffered just as much as any other was Ploegsteert in Belgium, just over nine miles south of the city of Ypres, which was itself destroyed in the war. Known as ‘Plugstreet’ to the British troops who served there, the community has created a series of manageable footpaths for visitors to walk to bunkers, trenches and cemeteries. It has also created a museum, called the ‘Plugstreet 14-18 Experience’. It tells the story of the town during those tragic four years of war.

Ploegsteert is often overlooked by tourists who tend to stay north in Ypres, and for that reason it’s quieter and less developed, leaving much more to see in a condensed area. The town’s suffering began in the winter of 1914 when the German advance was halted and both sides began to dig trenches, placing it just behind the front line. During the war, many famous men served in and around Ploegsteert, such as Bruce Bairnsfather and Winston Churchill, who commanded the 6th Battalion Royal Scots Fusiliers in 1916.

Driving south to the town the most obvious points to be seen are the cemeteries in the charge of the Commonwealth War Graves Commission and the various memorials. The route takes you through St Eloi, Wijtschate, known to the troops as ‘Whitesheet’, and down to Messines, passing memorials to troops from Ireland, New Zealand and Britain. On the right, as you enter Ploegsteert, is the Memorial to 11,447 men ‘who have no known grave’, while 394 men are buried in the adjacent cemetery. On the left-hand side is Hyde Park Corner cemetery with 87 graves, including four German soldiers.

Continue through the town, park the car, then take a walk into history. The suggested starting point is the Plugstreet 14-18 Experience. A visit to the exhibition, housed under a distinctive glass pyramid, shows photographs, short films, personal items and larger objects to illustrate the area around the town between 1914 and 1918. There is a memorial to the Australian miners and a replica of a ‘fake’tree used for observation and also by snipers. There are free brochures available at the front desk that contain information and walking routes.

There is an abundance to see, and the brochures highlight some of the most fascinating locations. For example, the concrete shelters where the wounded were treated, today they are used as chicken coups. There are several walking routes through Ploegsteert Wood where it is possible to see pillboxes along with trenches and shell craters.

A good starting point is the Strand Cemetery which contains 1,510 graves of soldiers, including 11 Germans. Follow the path into the wood and you are heading in the direction of what was the front line. Signposts direct you to CWGC cemeteries such as Rifle House, which contains 229 burials, including R. Barnett of the 1st Battalion Rifle Brigade, aged only 15 years old.

Upon leaving Rifle House Cemetery, follow the signs towards Toronto Avenue Cemetery. Move along the path around to the left, which then swings to the right after a few hundred yards and this leads out of the woods to a ‘T’ junction. Turn right and head towards Mud Corner cemetery which contains 53 New Zealand soldiers, one British and 31 Australian. Follow the path and on the left, you see a section of reconstructed trench lines and an original concrete shelter. If you have been lucky and observant you may have found shrapnel or spent bullets. However, do not pick up anything that looks like an unexploded shell; they are still dangerous.

At the road, you can turn right which leads down to a monument to the 1914 Christmas Truce, and a bit further on to the small cottage where Bruce Bairnsfather was inspired to create his cartoon character ‘Old Bill’. Turn around and retrace your path. This brings you to the Prowse Point CWGC Cemetery where there is also a memorial laid by FIFA.

There are several bars and restaurants in the town where good food can be had and the coffee is excellent. It is not a particularly large town, but by combining a visit to the museum and a walk around the woods, you will pass more than just a couple of hours. This visit to see another part of the front line can be extended if you wish to follow the directions to other locations which can be reached on foot.

Once your curiosity has been satisfied, return to your vehicle and you may wish to drive a short way further south to where Churchill served with the Royal Scots Fusiliers. There is a memorial plaque to him, along with memorials to other regiments, including the London Rifle Brigade. A lot is packed into this one, small area and looking at it today it is hard to believe the community endured so much hardship and yet survived.

On the drive back north there is time to reflect and contrast between the large museums in Ypres, but the small community museums such as the one at Ploegsteert are more personal and contain so many stories about the men who lived, fought and, in some cases, died there. By completing this short walk and visiting the cemeteries, you have walked the path of history which happened there and you are also remembering the men who did so much.