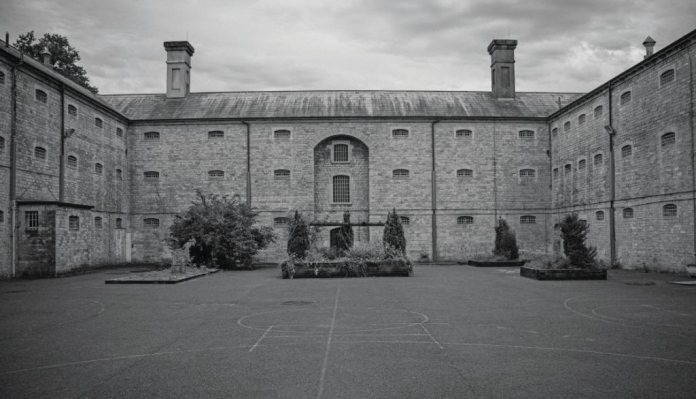 The opening scenes of the film ‘The Dirty Dozen’, where the convicted men are given the chance to redeem themselves by volunteering for a secret mission, are supposedly set at Shepton Mallet Prison in Somerset. In fact, the scenes were filmed in a courtyard at Ashridge House in Hertfordshire. However, Shepton Mallet did serve as a military prison and had been used as a place of incarceration dating back to the 17th century, with a reputation for its harsh conditions and treatment of prisoners. Between 1889 and 1926 several executions were carried out at the site, including an Australian soldier, Verney Asser, hanged in 1918 for killing another soldier, before being closed in 1930.

Shortly after the outbreak of war in 1939, the prison was re-opened for use by the British army and by 1940 housed 300 inmates. When American troops arrived in Britain in 1942 the US Military Authorities took over the prison for offenders under terms of the ‘Visiting Forces Act’, referring to the site as ‘6833rd Guardhouse Overhead Detachment’. This was later changed to ‘The Headquarters 2912th Disciplinary Training Center APO 508 United States Army’. Under the terms of the Act, American military justice could be enacted at the site, which also included capital punishment. Shepton reverted back to use by British military authorities in 1945.

The American staff comprised of 12 officers and 82 other ranks of the 707th Military Police Battalion, with Lieutenant Colonel James P. Smith as the first commandant. By 1944 there were 768 inmates serving sentences for a range of crimes including theft, robbery, absenteeism and murder. During WWII the US Military executed a total of 96 men for offences including assault against women and murder. Of this total, 18 executions were carried out at Shepton Mallet Prison, for which it has gained its notoriety.

The first American military execution was conducted on 12th March 1943 for the murder of an officer, with the last taking place on 15th June 1945. The official British executioner, Albert Pierrepoint, a civilian, officiated at many of these sentences. Two of the executions were by firing squad, conducted in the prison courtyard. The execution block, a red brick structure was specifically built by the US Military for the purpose. Today it is still standing and can be visited as part of the tour around the prison which has been open to visitors since 2017.

The prison continued to be used by the British army up to 1966 when it reverted to civilian use only. It finally closed in 2013, with the inmates being relocated to other institutions. Four years later it was opened for public visits and proved popular.

Entrance to the prison is through the original access where groups are escorted around the site by a guide, some of which are retired prison warders. These guides explain the conditions inside the prison from the earliest times to when it closed. It is unlike anything anyone will have visited before and is a unique experience. Walking along the landings and corridors lined by the doors leading into the cells, the atmosphere is stark. If you’re expecting to see Ronnie Barker’s character ‘Fletch’ from Porridge, forget it, that was comedy and there is nothing remotely humorous about this place. Yet, it has an appeal which draws in visitors curious to see something about which very little is known. The tour gives an insight into the penal system which is the law of our society and forms part of our social history.

The guides each have their own stories and anecdotes ranging from the strange and almost unbelievable to the more recent and familiar cases. People are fascinated by the macabre and in the courtyard, the guides recount the unusual cases of the two military executions by firing squad. There are other prisons open to visit, but here it is the military connection which sets Shepton Mallet apart from other similar locations. As well as the military prisoners, the facility was also used to store many of the irreplaceable historic documents for safe-keeping away from the bombing. These included the Domesday Book, charters and treaties as well as despatches relating to the battle of Waterloo.

The prison was not escape-proof and three British soldiers who did get out were soon recaptured. In July 1945 several American prisoners escaped and remained at large for many weeks before either surrendering to the authorities or being apprehended.

These stories and others make for diversions before visiting the execution block. This part of the tour begins in a corridor leading to the cell where the condemned man was kept, without his knowing he was right next to the gallows. The man would be taken from his cell and led into the execution room where the sentence was carried out by Albert Pierrepoint. The whole process took only minutes. He would later execute many war criminals and traitors, including John Amery and William Joyce known as ‘Lord Haw Haw’.

It may sound like an unusual tourist attraction, but from the purely historical point of view, Shepton Mallet Prison is an important site connected to social history. For the military historian, it gives an insight into military discipline and punishment and events which took place within the grounds have been used as case studies by many students. There are many stories to discover about the facility and the best way of learning about them, sifting out the ‘tales’ from the truth, is to go on a tour. After which, the time spent on site is entirely down to the individual and you can wander around to take photographs. For the truly adventurous, there is a chance to spend the night within the walls of the prison.

For information, including opening times, ticket prices and conditions during the COVID-19 situation go to www.sheptonmalletprison.com