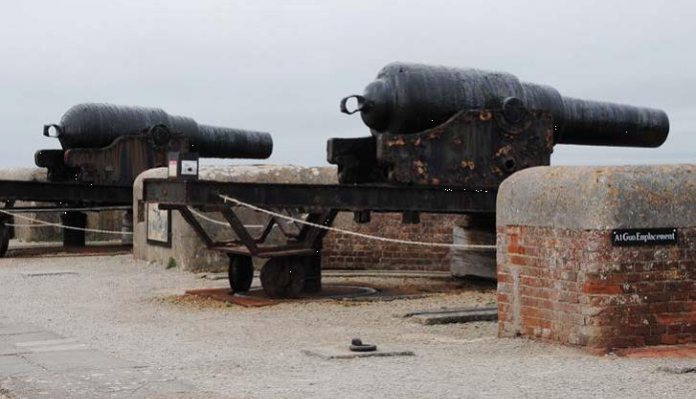 The Isle of Wight has a land mass covering almost 147 square miles, packed into which are fortifications and defences from the Medieval period to WWII.

Lying just two miles off the mainland coast at its closest point, it is crucial in guarding the waterway of the Solent which gives access to the harborages of Portsmouth and Southampton. The geographical location of the island renders it as a gate to close off the waterway to unwanted intruders. Because of this, the island has been used as a forward strategic base and today many of the defences built on the island over the centuries.

During the 1860s Britain believed it would be attacked by France and in response a chain of defences was built around the country. Some of these defences were built on the Isle of Wight, one of which was located on the heights of West High Down, a short finger of a peninsular which gave command of the approaches to the western end of the Solent. This was known as the Needles Battery, built by Major James Edwards, Royal Engineers, between 1861 and 1865 and today, being in the care of the National Trust, it is open to visitors. Another battery was built in 1895 and to distinguish between the two they were given the titles ‘Old Battery’ and ‘New Battery’.

Whilst the New Battery can be visited, it is the Old Battery site which really stands out in importance for enthusiasts of Victorian military architecture. After much hard work to clear and prepare the site, the National Trust opened the location for visitors in 1982. Over time, a series of fascinating displays have been created to show how the soldiers serving here lived from the time it was commissioned to the end of WWII. They are laid out to present walk-in type displays to give a complete representation which is a much more rewarding experience than just looking at items in display cases.

During the four years which it took to construct the brick-built fortification which would become known as the Needles Battery, buildings to accommodate the original garrison of one officer, two NCOs and 21 troops were erected, tunnels to connect with different levels were excavated and storage facilities for the ammunition were dug out. A defensive ditch was dug to protect the site from a rearward attack which could be traversed by the troops by means of a retractable bridge. The first weapons to be mounted at the battery site were six Armstrong rifle breech-loaders (RBL) which fired shells of seven-inch calibre weighing between 90- and over 100-pounds. The guns weighed over four tons each and had a range of 3500-yards, about two miles distance, giving them good coverage of the waterway. When combined with the firepower from guns on the mainland at locations such as Hurst Castle, enemy ships would have come under intense bombardment.

Work at the battery never stopped and improvements were constantly being added. For example, in 1872 two 12- ton Armstrong nine-inch calibre RBL guns replaced the seven-inch guns, which were more powerful and fired a 250-pound shell. In 1885 a shaft was constructed to connect to the cliff face and a lift down to the base of the cliffs was installed two years later. In 1893 six nine-inch calibre guns were installed as replacement armament, but these were of a different method of operation being rifled muzzle-loaders. Each gun was served by a crew of nine men and the guns fired shells weighing over 250-pounds.

Throughout the 1890s trials were conducted with the searchlight to identify ships passing through the Solent at night and resulted in the platform which forms part of the battery seen today.

In 1903 the Needles Battery received new guns and the old nine-inch guns were disposed of by simply tipping them over the edge of the cliff. New gun positions were constructed to support the site at the Needles, such as the Heatherwood Battery to the east, and the so-called ‘New Needles Battery’, completed in 1895, further up the heights of West High Down giving it an elevation of almost 400-feet above sea level. New guns of 9.2-inch calibre firing were installed in the New Battery in 1900. Between them these defences guarded the Solent during the First World War and the Old and New Batteries were credited with sinking two enemy vessels.

The New and Old Batteries played a role during WWII by providing anti-aircraft defence against German aircraft attacking targets on the island and engaged some enemy surface shipping. After the war the sites were given a new role with the New Battery being used to test Britain’s rocket programme through the 1950s into the early 1970s. Today there is a display at the site and the massive facilities can be viewed from the footpath.

As for the Old Battery, since acquiring the site in 1975 the National Trust has transformed it into one of the finest displays the organisation has in its portfolio of historical sites. Walking onto the site it becomes immediately obvious that a lot of hard work has been put into restoring the building and developing the displays. One of the most ambitious tasks was to recover two of the nine-inch guns from the base of the cliff where they had lain for almost 90 years and are now on display. The buildings house individual exhibitions, including one dedicated to the Home Front complete with allocations of food to show how little was available from tea, butter, sugar and the substitutes such as dried eggs.

There is plenty to explore at this fascinating location, such as the spiral staircase leading down to the searchlight platform with a spectacular view across the Solent, where visitors can appreciate the advantage the location would have had over any enemy. Other displays include a scale model showing the layout of the site and how it developed. There are useful information boards dotted around at various points which explain things, such as the mounting for an anti-aircraft gun during WWI. Photographs, personal stories and anecdotes of shipwrecks add to the history of the site.

A recreated ammunition storage room and racks, complete with wooden barrels for powder, show how it would have looked when the battery was in service during the Victorian period. The display of the types of shells fired by the guns at the Battery will be of interest to military enthusiasts, as indeed will all aspects of this intriguing site. Descending a flight of stone stairs, visitors make their way into the original powder storage rooms, complete with vaulted ceilings, and a fine example of Victorian military architecture. This is a location where you can spend two or three hours looking around at leisure.

Refreshments are available on-site and the New Battery and rocket testing are within easy walking distance to give a complete experience of more than 100-years of history all on this one site. Visitors’ online reviews for the site rate it as a place to visit, being highly recommended. I certainly found it a terrific experience and know that military enthusiasts will likewise find it to be so. To find out about opening times, visit the National Trust website and reference Old Needles Battery.