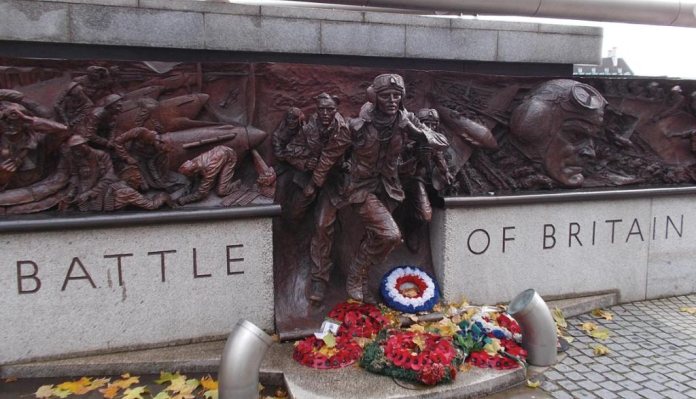 In the 1930s, a journalist and author, Arthur Mee, collated a list of villages in Britain that had been left untouched by the losses among the men and women who went to serve in WWI. He identified just 32 out of the thousands across the country. He called them ‘Thankful Villages’, which they undoubtedly were, to mark out their good fortune. After WWII, 14 of the original list of villages became what would be termed ‘Double Thankful, because, for the second time, all those who left to serve in the war returned home.

Sometimes these villages are called ‘Blessed Villages’ because they were spared the anguish of losing young men and women and having to erect memorials in tribute to those who did not return. The majority of villages, however, were not so fortunate and erected war memorials. These take pride of place in the communities, where each year residents gather to pay their respects on Remembrance Sunday. These war memorials are usually in some prominent location, such as a park or close to the parish or village church. They also vary in style and size, with some being formal whilst others are more modest.

War memorials have been erected ever since recorded history began. The Pharaohs’ tombs in Egypt are decorated with scenes of battles and the Romans erected monuments such as the Trajan Column in the 2nd century AD to record the achievements of Emperor Trajan. Thousands of years later, we still continue that tradition to honour those who fell in battle or to mark heroic deeds and even those who were victims of war. Today we look at these monuments and, if of a mind, we will look a bit deeper into the deeds of some of those whose names appear on the memorials. The obvious being those who won a medal, such as the Victoria Cross, for their actions on the battlefield.

A story to tell

From the period of WWI, the favoured themes were either a statue of a single soldier or a group of soldiers in full fighting order, complete with rifle and bayonet. These were raised on plinths across the country and are worthy of careful study, because of the attention to detail made by the artists. From the boots to the rifles, every item of the men’s kit and uniform is shown accurately reproduced in bronze. One such statue was created by the Frome-based foundry works of Singer in Somerset. The company had been a major employer in the area since the late 19th century, specialising in casting bronze statues and commemorative artwork. During WWI, men from the company left to serve in the forces, such as Charlie Robbins, who enlisted with the 2/5th Battalion Gloucester Regiment and fought at the battles of Fromelles and the Somme.

Charlie was one of the lucky ones who survived the war and returned home, where he took up his old job at the foundry. When the town was creating its war memorial, Charlie was chosen as the model on which the statue of the soldier was based and the Singer foundry cast the work. It is still there today and everybody in the town can direct visitors to the war memorial with Charlie’s statue. It lists the names of the town’s dead from both world wars, some of whom are buried locally in the churchyard.

A term that has become used in connection with war memorials is ‘Cenotaph’, which is derived from the Greek to mean ’empty tomb’. These edifices can be found in Argentina, which commemorates the dead of that country from the Falklands War of 1982, to Zambia, where there are two such memorials. The first was unveiled in 1923 to commemorate the dead of WWI, followed 54 years later when another was unveiled at Lusaka to those men who died in both world wars.

Britain’s Cenotaph is in Whitehall, London and serves as the focus for the nation’s Remembrance Day service attended by HM the Queen and other members of the royal family, the Prime Minister and politicians of all parties, along with the veterans of all conflicts since WWII. This does not distract from the services held at war memorials in small communities where, even after all this time, still remain very personal to those relatives of the dead who live in villages and towns.

For diversity and numbers, London is the place to investigate war memorials, starting with the Victoria Embankment stretching along the bank of the River Thames. It is dotted with tributes to both world wars. For example, the Imperial Camel Corps in Victoria Embankment Gardens, from where it is just a short walk to the Belgian National Memorial, which is in gratitude to Britain’s support during WWI. Walking towards the steps leading up to Westminster Bridge, visitors pass the RAF Memorial from WWI, the Chindit Memorial from WWII and several others on the area to the rear of the Ministry of Defence, such as the Korean War. This avenue of memorials ends at the steps with the dynamic Battle of Britain Memorial containing all drama of the period.

On the other side of London, towards Horse Guards, visitors will find memorials to the Guards Division, the Royal Artillery, the Royal Marines, the Machine Gun Corps and the Cavalry Memorial which commemorates those regiments of all British and Commonwealth nations which served in WWI. There are many more which can be tracked down to visit, such as that to RAF Bomber Command in Hyde Park and other smaller tributes. Special walking tours have been organised by groups or with some planning an enthusiast can plot their own route.

Outside of the capital, memorials can be found in some of the most unexpected locations, such as that to the Bomb Disposal at Mundesley in Norfolk. It is in tribute to the men who were killed whilst clearing away unexploded ordnance from WWII. At Slapton Sands in Devon, there is a memorial to those American soldiers killed during training on Exercise Tiger as they prepared for D-Day. In West Bay, Dorset, there is a small memorial to the Canadians who trained in the area in readiness for the Dieppe operation. In Shaftsbury, Dorset, the war memorial by Holy Trinity Church in Park Walk lists the names of American service personnel who were tragically killed in a training exercise during the war.

Then there are those such as that to the 21 men and two glider pilots of 9th Airborne Field Company Royal Engineers who crashed at Double Hills in Somerset on 17th September 1944, located in the countryside. Searching these out pieces together more segments of history, such as this accident, which had it not happened, would have flown the men to Arnhem. Their story ends in being buried in the Commonwealth War Grave Cemetery in Weston-Super-Mare in Somerset. There are so many other stories like this that makes war memorials a fascinating subject to research. The War Memorial Trust (www.warmemorials.org) helps in the care and maintenance of these memorials and can provide advice and information concerning their histories.