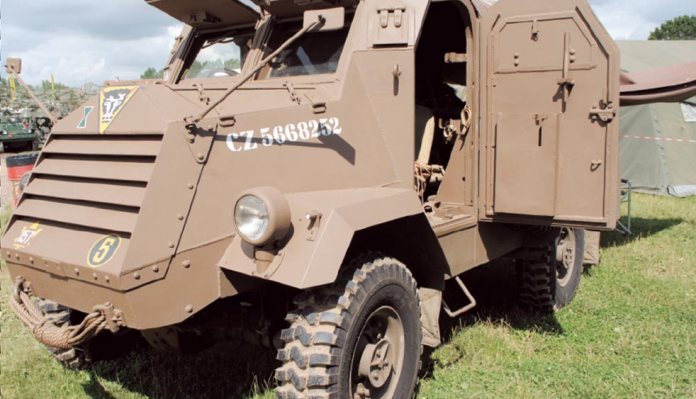 The role of Canadian soldiers during WWII is well-recorded from operations such as the ill-fated attack at Dieppe in August 1942 to the great success during the D-Day landings.

What is not so widely recognised is the amount of weaponry and vehicles produced to support the Allies. For example, the Canadians built thousands of Bren Gun Carriers. Factories also produced Sherman tanks, and they turned out thousands of other locally designed vehicles such as the Fox and Otter.

One of the lesser-known vehicles was the 4X4 C15TA armoured truck, which was actually developed from the Otter Light Reconnaissance Car. It was intended to operate in roles similar to the US-built M3 Scout Car and carry a section of eight infantrymen. It was built at the Oshawa plant of General Motors of Canada in Ontario. The C15TA was based on the 15 cwt chassis of the Chevrolet C15 Canadian Military Pattern truck with the armoured hulls being built by the Hamilton Bridge Company. Production started in 1943 and by the end of the war some 3961 vehicles had been built.

The C15TA was used by British and Canadian troops in Europe after D-Day and it served as an armoured carrier and also as an ambulance known as the CT15AA fitted with stretchers. The rails supporting the canvas cover of the driver’s cab could be used to allow a machine gun to be fitted for self-defence and provide support fire for the infantry. It had armour between 6mm and 14mm which provided protection against small arms fire. It measured 15-feet and 7-inches in length, 7-feet and 8-inches in width and stood 7-feet and 7-inches in height to the top of the roof. Armoured screens could be lowered to protect the driver. The side doors of the driver’s cab were armoured as was the rear access door for the infantry. The rear seating space was open-topped and provided with a canvas cover for use in inclement weather.

It was operated by a crew of two and could carry eight fully equipped infantrymen. The C15TA was fitted with a front-mounted six-cylinder GMC 100hp petrol engine to produce speeds up to 40mph on roads. It weighed 4.5-tons and was also used as a command vehicle. When the war ended many C15TAs were sold off to several countries, including the Danish Army which used them as the M6 Mosegris, the Dutch Army received almost 400 and the Spanish Army took around 150. In 1955 the Portuguese Army received a number, which were known in service as ‘Granadeiros’. British forces used the C15TA in the Far East campaign in Burma and after the war these were left behind. Some of the vehicles were used by the French Army returning to reclaim French overseas territories. Some vehicles were used by other countries in the Far East and remained in service well into the 1960s.

Occasionally an example of the C15TA turns up at a show – the one seen in the accompanying pictures was photographed at a War & Peace Show some years ago. It was discovered in 1984 lying in a scrapyard in Holland where it was in a very bad condition. Over a period of five years it was restored using parts obtained from as far away as Malaysia. Other parts were refabricated and in 1989 it was in a good enough condition to be driven to Normandy by the then owner to commemorate the 45th anniversary of D-Day. The present owner has had the vehicle since 2008 and he has completed further work to restore it to represent a vehicle of the 1st Canadian Armoured Carrier Regiment 1944-1945.

There are examples of the C15TA in various museums and some are in private collections such as the Cobbaton Combat Collection at Chittlehampton, Umberleigh, North Devon EX37 9RZ (www.cobbatoncombat.co.uk). Just very occasionally one turns up for sale, but the condition can vary from very poor to quite good. For example, one in very good condition was sold in 1999 for £2550, but today the rarity of the vehicle will have pushed the price up. However, for a real enthusiast to own such a vehicle it would be worth it.

I would like to extend my sincere thanks to the owner of this vehicle for allowing me to photograph the vehicle and for his time talking about the history of the C15TA.