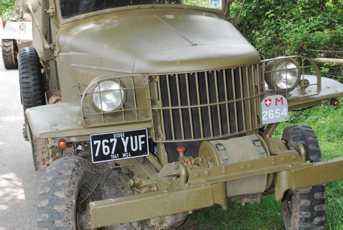 When the Dodge brothers John Francis and Horace Elgin established the motor manufacturing company bearing their family name in 1900 little did they realise they were creating an institution. The brothers moved with the times and by 1914 their company was producing a range of light trucks which were work vehicles, but the design also interested the military. Two years later in 1916 the company was supplying vehicles to the US Army for use in the Pancho Villa Expedition of the same year. The company supplied vehicles during the First World War but the war ended before Dodge could produce trucks in the large numbers which the military needed. The inter-war years was a lean period for heavy industry but Dodge managed to survive.

As the approach of war loomed again it was only natural that the company should once more produce vehicles for the military. Dodge produced a series of trucks specifically for the military which had been developed and given the title ‘WC’ with the initial ‘W’ standing for 1941 and the ‘C’ standing for the half-ton rating. Production increased with vehicles also being supplied to Britain under the Lend Lease programme and later to Russia. In fact, between 1940 and 1942 the company produced almost 80,000 vehicles in the half-ton range. Parts were interchangeable even with some of the larger vehicles and Dodge continued to supply vehicles throughout the war.

The entire WC range would prove to be versatile and many were developed into specialist vehicles for recovery roles and even ambulances. One of the earliest vehicles produced in the WC series was a type designated as the pick-up open cab or WC4 which had an engine capacity rated at 79hp. It was very similar to the WC22 half-ton cargo carrier but they had different engines, along with some other minor points, which made them separate vehicles altogether. Both were fitted with a Braden MU winch, which was a feature on other Dodge vehicles, also.

The WC4 was fitted with transverse seats and had a payload capacity of 1,000 pounds of cargo which allowed it to be used for carrying supplies such as ammunition or food, or passengers. These could be specialist personnel such as radio operators or medics. The WC4 was also used to tow trailers, anti-tank guns such as the 37mm calibre M3 which weighed 900 pounds and other similar loads. The WC4 towing anti-tank guns were in service with the first specialist units operating in the role of tank destroyer and the vehicles could carry the gun crew and a supply of ammunition ready to use. Other vehicles could carry extra ammunition in trailers.

The WC4 measured just under 16 feet in length, and approximately 7 feet 4 inches in height and 6 feet 4 inches in width. It weighed 4,775 pounds (2.1 tons) and remained in service until it was replaced by the WC51 ¾ ton truck which is better known as the Weapon Carrier. Around 5,570 WC4 vehicles were built and these served very well until heavier more versatile vehicles came into service. Although many men entering the armed forces could already drive, the Chrysler Corporation established a school to teach the handling characteristics of military vehicles to troops and the WC4 was used for this purpose, also.

The WC4 is not encountered as often as other more numerous WC types and to see one at an event is interesting and occasions a closer inspection. For example, the version used to illustrate this look at the vehicle was spotted at the biennial ‘Maiden Newton at War’ in 2012. This one was in very good condition – but many which are offered for sale are nowhere near such good condition and certainly require a lot more attention than a change of oil and new spark plugs. However, when restored the result can be incredible.

There are specialist sites on the Internet through which one can buy a WC4 either in Britain or the US and there are some in Europe. Some sites, such as www.hmvf.co.uk is a starting point and also gives a lot of specifications for the vehicle. We are used to buying and selling on eBay and there is a specialist section dealing with military vehicles and a recent check showed there were a couple of WC4 vehicles on sale. Another site to check out is www.pirate4x4.com which has a range of vehicles on offer including some Dodge types. A recent check with www.pinterest.com in the US revealed a well restored version for sale priced at $17,000, which is very good for such an unusual version.

Finally, and closer to home, a check on the MilWeb site uncovered a WC4 for sale priced at £4,500, which was in running order but in need of some serious restoration. It came complete with winch, but requires a lot of work. The good thing about the MilWeb site is that one can contact the sellers by Email through their adverts which is useful for asking questions.

The WC4 may still be an unusual type of WWII vehicle to see and with such a low production run we are unlikely to see an increase in the numbers being exhibited at events. In fact this is one reason why more attention should be paid to these vehicles when seen because the owners are doing a great job keeping them going. Being a wheeled vehicle it is possible to use it as a ‘run-around’ and doing the ‘school run’ in one would certainly turn heads… GM