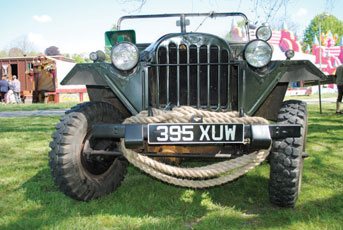 During the Second World War the Soviet Red Army was supplied with huge numbers of vehicles by Britain and America to replace the losses following the attack by Germany in June 1941. It was this support which allowed Russia to hold on and fight back until the country became properly organised. Among the range of vehicles sent to Russia were thousands of Willys Jeeps which the Russians found very useful and versatile. In fact, so much so that they developed their own version known as the GAZ-67.

The Sincerest Form of Flattery

If imitation is the sincerest form of flattery then the Russians really paid tribute to American engineering by producing almost 93,000 GAZ-67 vehicles between 1943 and 1953. The vehicle was built by the Gorkovsky Avtomobilny Zavod (Gorky Automobile Plant) from which the letters GAZ was taken. The GAZ-67 entered service in late 1943 and in January 1944 the GAZ-67B began production and although it entered service in the same year it did not entirely replace those already in service. The GAZ-67 would have continued to be used until such time they were no longer serviceable and then the newer design would have taken over its role. The original vehicle design was fitted with a 50hp engine and the GAZ-67B had a slightly more powerful 54hp engine, and a wider wheelbase but apart from that there was little noticeable difference.

The GAZ-67 replaced the GAZ-64 which was a smaller vehicle and like its American counterpart it served on well into the 1950s and some client states of Russia continued to use it well into the 1960s. This production and service history of the vehicle makes it extremely versatile when it comes to presenting re-enactment displays and allows groups to depict WW II and the ‘Cold War’ period. In fact the post-war GAZ-67B vehicles were used during the Korean War.

The GAZ-67 had a wheelbase of 2.1 metres and measured 3.345 metres in length overall. It was 1.685 metres in width and 1.7 metres in height and weighed 1,320kg. It was equipped with a collapsible canvas top which could be erected for use in inclement weather. It was a 4X4 vehicle and the four-cylinder GAZ-A petrol engine gave it a road speed of 90km/h. Apart from the driver it could carry up to three passengers and was a versatile vehicle being able to operate in a wide range of roles. For example it could tow light artillery such as 45mm calibre anti-tank guns. It was also used to tow wheeled mortars of 120mm calibre, supply trailers and could even be fitted out with radios as a communications vehicle. Its cross-country ability meant it could easily operate with units in forward areas and even be used in an emergency to evacuate wounded.

Today there are a number in private ownership and these appear at shows such as War & Peace and even smaller shows where re-enactment groups use them as part of their display. Some sources claim the GAZ-67 could be armed with a machine gun mounted on a pintel for self-defence. This is a role similar to the Willys Jeep. At a recent event at Tavistock in Devon there was an example on show at the static display put on by the Soviet Red Army section of the WW II Re-enactment South West (www.wwiireenactmentsouthwest.co.uk)

There are specialist sites on the Internet such as Milweb which offer the GAZ-67 for sale and there are sites which also specialise in spare parts for restoration projects and general servicing and maintenance. Some owners who wish to move onto something different also offer their GAZ-67s for private sale and some of these advise ‘price on application’ and from the images seen these vehicles appear in very good condition. A search will also reveal service manuals for owners who enjoy hands-on maintenance. It is possible to drive the vehicle on the road and it falls into the category of vehicles which are exempt from road fund tax. Insurance is something which can be arranged by specialist brokers such as Adrian Flux or advice will be given by vehicle owners clubs such as IMPS or the MVT.

As with other wheeled vehicles of a comparable size and role this Russian stalwart is perfect for transporting all the stuff for the weekend at an event. It is small enough to keep in a garage or at least covered with a protective sheet without taking up too much room. For either static displays or mobility shows the GAZ-67 is a handy vehicle and an unusual type which attracts attention. GM