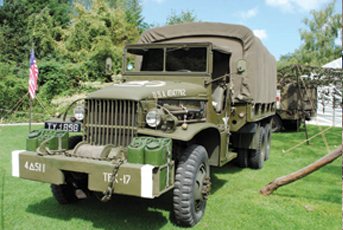 Not all vehicles which turn up at events are roaring armoured heavyweights, some have a rather more reserved appearance. These are the soft-skinned vehicles and are very popular with owners of military vehicles used in WW II. Unarguably the most important of these was the CCKW also known variously as either the ‘Deuceand- a-half’ or the ‘Jimmy’.

Trucks or Lorries
These 6X6 vehicles, called trucks by the Americans but lorries by the British army, came in a wide variation of types. There was the Short Wheel Base 352 and the Long Wheel Base 353 and either the closed cab or open cab versions. The CCKW lettering designated the year 1941 (C), conventional cab (C), all-wheel drive (K) and tandem rear axles (K). The basic version weighed 5.3 tons and measured 21.36 feet in length, 7.35 feet in width and 9.19 feet in height. Between 1941 and 1945 General Motors produced over 562,000 of these trucks and other manufacturers took the production figure to more than 812,000 vehicles.

The ‘Jimmy’ was used in all theatres of the war and was so durable it continued to serve in other conflicts such as the Korean War, which makes them suitable to participate in many re-enactments events. At some shows owners get together to represent the supply unit called the ‘Red Ball Express’ which was a non-stop convoy system to supply food, fuel and ammunition to the fighting units after D-Day. This unit operated from 25 August until 16 November 1944 and at its height there were almost 6,000 trucks on the road at any one time delivering 12,500 tons of supplies each day.

The trucks were capable of carrying payloads of up to 2.5 tons – hence ‘deuce and a half’ - but in reality it probably exceeded this limitation during battle, and the design was also produced in specialist roles such as the 750 gallon capacity fuel tanker, 700 gallon capacity water tanker, bomb disposal, medical support vehicles, fire trucks and the famous DUKW (‘Duck) amphibious truck was developed from the CCKW design. They towed trailers, carried troops and wartime photographs show them in all these variants and present owners today turn the vehicles out to show them in the widest possible range of roles.

Looking Good
It is incredible to see how much attention an ordinary vehicle such as a Jimmy truck attracts when parked up at living history events. Even if the owner just opens the bonnet to complete to check the oil. Inquisitive heads pop up all over the place eager to have a look and take photographs. Owners take part in ‘road run’ convoys for a bit of fun to show what is happening at events and they do make an impression. Battle re-enactments also allow owners to participate by driving the infantry into the battle scenario. These trucks have also been in countless war films and documentaries.

Living With A Jimmy
The CCKW was fitted with a GMC six-cylinder 269 cid 91.5hp engine which gave road speeds up to 45mph. It was thirsty on fuel and a 40 gallon fuel capacity would allow an operational range of 300 miles (7.5 miles to the gallon). Despite the fuel consumption rate the Jimmy is often driven direct to events such as War & Peace and Military Odyssey and the large rear cargo area allows for all the owners equipment such as tent and food to be loaded for a full weekend on site. The rear has a canvas cover and some owners prefer to sleep in there. Once on site the ‘extra touches’ are added for display such as helmets, weapons and other personal items. Some Jimmys had provision for a .50 calibre machine gun to be mounted above the cab roof and these really stand out in a line up.

How much is it going to cost to buy a Jimmy? Well, that depends on the type and the condition as with all vehicles. It is quite easy to locate them through the specialist Websites such as www.milweb.com An unusual Website offering was found at www.carandclassic.co.uk which advertised a Jimmy painted in the colours of the United Services Organistion (USO) which travelled around to entertain the troops in WW II. This particular version is equipped to sell hot beverages and food and its condition is described as ‘good’ and is for sale priced £12,500. But like all military vehicles, it does pay to search around and make enquiries.

The vehicles are exempt from road tax and seat belts do not have to be fitted because of their date of manufacture. However some owners have fitted them for safety reasons. Spares are available and maintenance manuals can be bought for servicing. Research shows that Jimmys are on sale all across Europe from Norway to France and in the UK and spares are even available on EBay. There are several specialist Websites for owners to list their details such as: www.cckw353.org

Owners can register with such Websites to check for spare parts, details of vehicles, including sales and wants, and find out where events are being held.

There are specialist companies which can arrange for recovery in the case of a breakdown such as www.motorbreakdownrecovery. com (0844 414 2399) and by contacting them arrangements can be made for an annual fee. Insurance can also be made by contacting specialist brokers such as our old friends Adrian Flux. GM