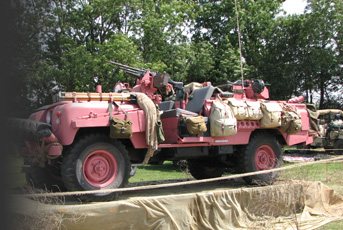 The company of Land Rover was founded in 1948 to produce rugged military vehicles for use in all terrains. Today the vehicles are still a firm favourite with many farmers and there are even luxury-end versions with well-upholstered seats. Of course, they are still popular with the military forces around the world with some 200,000 vehicles being sold in 2009. Although no longer a British-owned company the reputation of the vehicle is a bye-word for reliability and older versions are popular also with owners who display them at shows.

During its history the Land Rover has been produced in many designs and models which led to variants being developed. For example, Vickers-Armstrong built a hovercraft version called the ‘Hover Rover’ in 1962 and in the 1980s a short-lived half-track version called the ‘Centaur’ was developed but never entered service. A Centaur was offered for sale back in 1997 priced £15,000 and the Tank Museum at Bovington has an example in its collection. The Land Rover has also been used in many films, sometimes in disguise such as the futuristic design specially built by a film props department for the 1995 film ‘Judge Dredd’ starring Sylvester Stallone.

The Land Rover has been used by many armed forces around the world and has given sterling service to the British Army in conflicts from the Falklands to Afghanistan - and the Northern Ireland ‘troubles’ in between.

In the Pink… Why?

Land Rovers serves as ambulances, radio vehicles and weapons platforms, with the most famous being the so-called ‘Pink Panther’ which was developed for the Special Air Service. This version of the Land Rover was developed in the mid to late 1960s by the Cambridge-based company of Marshalls specifically for the SAS operating in desert terrain. Based on the Series IIA 90 chassis, Marshalls built 72 Pink Panthers for long-range operations in the harshest of conditions. The choice of pink camouflage for the vehicles did raise some eyebrows until it was politely pointed out that the Long Range Desert Group had been successful with the colour scheme during WW II. It was a low visibility colour and at a distance it did blur into the topography of the terrain.

The Pink Panther design would also influence vehicle development for special forces in other countries such as Australia which developed its own version. There have been a number of imitations but a recent conversation with the owner of a genuine Pink Panther informed Gun Mart that today he believes there are no more than 20 known original vehicles in existence including those in museums. So small is the select band of Pink Panther vehicle owners that they know one another. At Cobbaton Combat Collection the owner of a ‘Pinkie’ as they were nicknamed, knew the owners of the other two Pink Panthers I have spotted this year. One was at the Trucks & Troops event at the National Motor Museum at Beaulieu in Hants and the other was at War & Peace. So, that is three down and seventeen more to go to tick off my list. However, the one understood to be held by the SAS Regiment at Hereford would be off limits.

Pink Panthers were weapons platforms and were equipped with an extensive range of weaponry and radio equipment, extra fuel, water and food. Machine guns such as General Purpose Machine Guns, GPMGs, were the main weapons backed up with grenade launchers, shoulder-fired anti-tank weapons and rifles. The vehicles are 4X4 and can be driven on the road to take part in events, such as the one on display at Cobbaton. Obviously the vehicle comes under the ordinary driving licence but insurance cover can vary. There are specialist companies which will give cover for such a specialist vehicle such as leading 4X4 insurance company in the UK called Quotezone (www.quotezone.co.uk) which has headings under motoring, business and leisure. As with all types of insurance the quote is based on the owner’s profile such as age, profession, driving experience and mileage of the vehicle.

The colour of the Pink Panther and its rugged appearance means one can’t miss it. However, once seen they are not forgotten because they look so very different from other versions of the Land Rover. Fairly bristling with machine guns and loaded with spare equipment this is a fighting vehicle. There is an Ex-Military Land Rover Association (www.emlra.org) and the York-based company of P.A. Blanchard & Co., Clay Lane, Shiptonshire, YO43 3PH (Telephone 01430 872765 or visit the Website at: www.pablanchard.co.uk) has a range of Land Rover variants for sale. However, due to the low numbers of Pink Panthers there are in private ownership that when one does come up for sale there is a frenzied interest. Research shows that back in 2004 a Pink Panther was offered for sale at around £17,000. This figure can only increase as an investment.

Pretty in Pink, Bland in Beige

The Pink Panther was removed from Service in the 1980s and was eventually replaced by a 110 version painted in the more conventional beige colour scheme. The Pink Panther looks good and owning an original puts one in a true minority group, but owners are more than happy to stand and talk about their vehicles, as I have found out. There are some imitations out there but I am reliably informed the one sure way of telling a real Pink Panther from an imitation is the number plate. Those I have seen so far all begin with the series number ‘10’ and if any reader should know of an identification list we would be pleased to hear from you so that we can pass on the details to others who would be interested in such details. So, next time when visiting a military vehicle show, keep an eye open for a Pink Panther it would be worth examining it in detail.