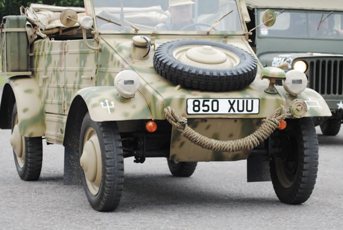 When Adolf Hitler came to power in 1933 and the German army began to re-arm and upgrade ageing equipment, vehicle manufacturers were asked to produce trucks and cars which would have a military application as well as civilian use. One such manufacturer was Ferdinand Porsche, whom Hitler asked to develop a ‘Volkswagen’ or ‘People’s Car’ which was to be inexpensive and easy to manufacture. This was the KdF wagen (Volkswagen Beetle) which was intended to be a mass-produced family vehicle, but what resulted was also ideally suited as the basic vehicle for military use.

In the 1930s the German motor industry was undergoing a radical change in an attempt to reduce development and production costs. For example, four companies, Audi, DKW, Horch and Wanderer, combined to form the Auto Union AG in November 1931. The Government of the Weimar Republic at the time invested financial backing to this amalgamation, but two years later when Hitler and the Nazi Party was elected even more money was ploughed into developing the motor industry. It has been estimated that investment more than doubled in two years with five million marks in 1933 to some eleven million marks by 1935, at a time when around 36 companies were producing vehicles.

In 1938 Germany annexed Austria and also acquired the motor industry of Czechoslovakia in the same year. This was a huge manufacturing base with the capacity to produce all types of motor vehicles. Germany sent hundreds of vehicles to support General Franco during the Spanish Civil War of 1936-1939, where they were tested in readiness for combat roles on a much larger and more demanding scale. By now there were over 100 different types of trucks being produced, some 55 various types of cars and 150 forms of motorcycle. It was obvious that streamlining had to be introduced and this number reduced to create a more efficient industry. The number of truck designs was reduced by a massive 80% so that only 19 types remained to be produced. The different types of cars were reduced down to 30, from which Ferdinand Porsche’s Volkswagen would emerge. It was a radical move but it reduced waste and introduced a range of commonality in parts.

When Germany invaded Poland in September 1939, the Type 62 car was being used in a range of liaison roles. However, following experiences in the campaign the army asked for a more refined vehicle with better off-road capabilities. This resulted in the Type 82 or ‘Kubelwagen’ (Bucket or Tub car) - a very basic vehicle with no frills, but easily and cheaply built.

It was a basic 4X2, four door, four-seat vehicle fitted with a four-cylinder, air-cooled engine rated at 985cc, 23bhp to give speeds up to 80km/h. In 1943 a larger engine of 1,131cc, 25bhp was fitted which gave more power. The vehicle was highly successful in service, even in Russia and North Africa, where it’s novel limited slip differential and rear mounted engine/drive gave it an effective off-road capability without complicated four wheel drive.

The Kubelwagen measured 3.74m in length, 1.60m in width and the height with the canvas roof erected was 1.65m and with it collapsed it was only 1.11m in height. The windscreen could be folded down and the driving controls were very simple. It weighed only 715kg in its basic form but weights varied according to the role and the version.

Production of the Type 82 commenced in February 1940 and continued until 1945 by which time almost 50,500 vehicles had been built.

The Kubelwagen lent itself to a range of duties and was even developed into some variations, such as vans and even an ambulance version. The Type82/1 was a radio vehicle and the Type 82/7 ‘beetle bodied’ command car (both of which had three seats), and the Type 87 Kommandeurwagen one of the few variations to feature four wheel drive, as did the interesting Type 166 Schwimmwagen amphibious model.

Another unusual version of the vehicle was the Type 276 Schlepperfahrzeug which was fitted with a tow hook. This allowed the vehicle to tow the 3.7cm PaK35/36 anti-tank gun and carry the gun crew and ammunition. This version was produced from 1944 onwards and whilst the original Type 276 is quite unusual today, examples of the Type 82 are seen at military vehicle shows towing the light PaK 36 anti-tank gun to demonstrate the role it could have undertaken during the war.

Apart from being a familiar sight at historical military vehicle shows, the Kubelwagen is a familiar image in many war films, both factually-based and fictional, such as the famous ‘Where Eagles Dare’ starring Richard Burton and Clint Eastwood. However, all is not what it may seem, and some of the vehicles used in the film were recreated for the production, built around the chassis of other vehicles, including a couple of Kubelwagens. One of these is still operational and to the inexperienced it looks just like an original vehicle. There are differences of course but for the purposes of the film the vehicle was perfect for the role. Today there are specialist companies producing reproduction versions of the Kubelwagen and they are very good. It’s also possible to pick-up Kubelwagen ‘kit-cars’ based on more modern Volkswagen floor ‘chassis’ and running gear.

In fact, the last surviving example of a Kubelwagen from the 1968 film ‘Where Eagles Dare’ is still going strong and I photographed it at the ‘Bunker Bash’ at Kelveden Secret Nuclear Bunker, Brentwood, Essex in 2010. One of the photographs was staged to show the vehicle towing a gas firing reproduction Pak 35/36 anti-tank gun to replicate the Type 276 specialised version of the Kubelwagen. The weapon was specially built and uses gas to produce the effect of firing and the combination worked very well.

There is more to the Kubelwagen than just appearing as a plain liaison vehicle as a search through reference books will reveal and will make one look at it very differently. So, from mobility displays to becoming a stock-in-trade vehicle for war films the Kubel still has the ability to attract attention which is not bad for an otherwise unpretentious-looking vehicle.