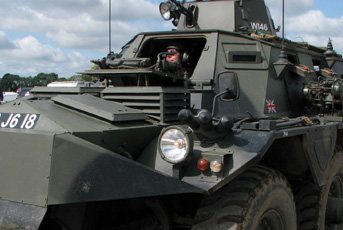 Back in the 1970s the nightly news broadcasts were filled with details of events in Northern Ireland as the troubles there flared and riots erupted. Just as with classic civilian cars there are some military vehicles which have become iconic images of a certain age and will always be associated with a particular military action. The British-designed and built FV603 Saracen APC is one such vehicle which dates from the immediate post-WWII period but will long be remembered from the news bulletins in the 1970s which showed Saracens, sometimes in fleets of several vehicles, patrolling the streets of Belfast during the troubles in Northern Ireland.

There was no mistaking the box-like shape of the Saracen with its no-frills appearance as being anything other than a military vehicle. Indeed, even the distinctive whirring sound of its engine signalled its approach to a riot situation long before it came into view. As an APC it could carry up to ten men in the rear who could deploy to help deal with the problem with a range of antiriot equipment.

The design project for the Saracen was started by the Coventry-based company of Alvis in 1948 when British troops were being sent to help deal with ‘the emergency’ in Malaya where the situation created a very real and pressing need for APCs to transport troops in reliable, well protected vehicles which also had their own defensive armament, but the prototypes of the vehicle were not to be ready for trials until 1952. When the prototype vehicle appeared it showed up a number of problems but time was of the essence and the Saracen was urgently required to meet Britain’s overseas commitments. The Saracen went on to enjoy a production run of 20 years with vehicles also being sold to a number of overseas armies across Africa and the Far East.

The Saracen was developed into other variants, including a command vehicle known as the FV604 and the FV610 used by the Royal Artillery in a command post role for which it was fitted with a larger hull. However, most people will always associate it with its role as an APC in Northern Ireland. The Saracen was used in experimental trials with surveillance radars but it never got beyond the prototype stages along with a short-lived programme to develop a mineclearance system. A fire tender version called the Salamander was developed and 125 vehicles were built for use by the Royal Air Force and the Royal Canadian Air Force. These vehicles were operated by a six-man crew and special equipment could produce up to 7,500 gallons of foam per minute to deal with crashed aircraft. A number of the basic versions of the Saracen have been used by paramilitary units and police forces in anti-riot situations during civil unrest and this role continued into the 1990s.

The construction of the Saracen hull was welded steel measuring 17 feet two inches in length, eight feet four inches in width and eight feet one inch in height with a fully traversing turret mounting a 7.62mm calibre machine gun (.30 Browning) to provide self-defence or give support fire for the deploying infantry. There was also the ability to fit a second machine-gun, usually a magazine-fed Light Machine Gun of 7.62mm calibre on a race-ring mounting set further back behind the turret. The hull was fitted with three firing ports either side and one in each of the two rear doors to permit up to eight infantrymen to fire from within the cover of the vehicle.

The basic FV603 version of the Saracen had a combat weight of around ten tons and fitted with a Rolls-Royce B80 Mk6A eight-cylinder petrol engine which developed 160hp at 3,750RPM to give road speeds of up to 45mph and an operational road range of 250 miles. Armour protection was between 8mm and 16mm which was sufficient against standard small arms fire and the Saracen could cope with a range of other obstacles including the ability to ford water courses up to three feet six inches in depth, scale vertical rises up to 18 inches in height and span gaps of five feet.

During the early 1970s in Northern Ireland the British army deployed them and other vehicles to support the troops in dealing with the problems. Some of the fleet sent out to patrol the streets of Belfast had been intended for Libya but the transaction was curtailed and the vehicles were used with infantry units and became a familiar sight along with the much lighter FV1609 Humber ‘Pig’ APC. Both these vehicles were used to set up road blocks where their weight and bulk meant they would stop any approaching civilian cars and they were even used to push through barricades set up by rioters.

The Saracen remained in service with the British army until the late 1980s and was gradually withdrawn, having undergone a series of upgrades to cope with an ever-changing situation in Northern Ireland. Overseas countries also replaced their fleets of Saracens over the years and production was finally ended in 1972. Today Saracens are exhibited in military museums and some are in private hands. When exhibited they are invariably presented in the green and black camouflage paint scheme of the British army of the 1970s, and serve as a reminder of how things were just 40 years ago.

As a footnote the Saracen has also been turned into something of a film star, albeit not always being instantly recognisable. Over the years the Saracen has appeared in several films including the WW II movie ‘633 Squadron’ released in 1964 where it stands in as a German vehicle. Saracens were also shown in the 1994 film The Crying Game which is set against the backdrop of the troubles in Northern Ireland and a number of dramas set in the same period.

Saracens are available through a number of specialist dealerships or Websites such as ‘Milweb’. The Aldershot-based Dave Joseph Military Vehicles in Hampshire has Saracens as does www.quartermaster.co.uk These vehicles appear to be a popular as a search revealed that most websites offering Saracens have them listed as already sold.

How Much Do They Cost?

Well that all depends. For example, a 1952 vehicle requiring some work was being offered for £2,500 while a well-known protest group put their 1957 Saracen up for sale for £7,000 and this was in very good condition. Insurance can be arranged through Adrian Flux or other specialist brokers and they can be driven on the road. In fact the Saracen, which is tax exempt, can be insured for around £150 depending on broker and driven on driving licence category D1 which covers large minibuses!