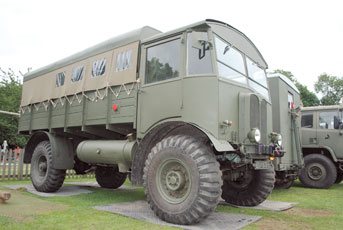 Measuring over 20 feet in length, 7 feet and 10 inches wide and standing around 9 feet and 7 inches in height, the 4X4 AEC Matador is hard not to notice.  This heavyweight truck was used during WWII to tow field artillery of 5.5 inch calibre and also 3.7 inch anti-aircraft guns.

The Southall-based company of Associated Equipment Company (AEC) was already producing a range of wheeled vehicles for the British Army and Commonwealth forces, and the ‘Matador’ was another design to add to the list. The company began producing the vehicle in 1936 and built over 9,000 which were used by the Canadian Army and the RAF, also. It was taken out of service in 1953 and many were bought by haulage firms, removal companies and even travelling funfairs. Today a number of the Matadors have been restored to their former glory and are taken to displays around the country.

The Matador has a distinctive shape to the driver’s cab with its flat-faced front and a slightly arched tarpaulin roof known as a ‘tilt’. During the war the Matador served in all theatres including Italy, Europe and North Africa where it was used to carry anti-tank guns such as the 6-Pounder in the method known as ‘portee’. This involved loading the complete gun aboard the vehicle to transport it as a single load rather than towing it. This was used mainly in North Africa where the portee method prevented the wear and tear on the gun’s wheeled carriage over hard terrain.

Mostly seen today in the four-wheel design there was a six-wheeled version developed for the RAF known as the ‘Marshall’. This was equipped with a flatbed behind the cab on to which was fitted a fuel tanker body with a capacity to carry up to 2,500 gallons of fuel for aircraft such as the Lancaster bomber. Powered by an AEC 7.6 litre diesel engine rated to 95hp it could reach speeds of up to 30mph which was sufficient for the heavy weights it towed. An experimental version was built with a half-track design which involved keeping the front wheels but replacing the rear wheels with caterpillar tracks. Development does not appear to have progressed much beyond this stage and it did not enter service. There were also versions fitted with jib booms on the rear to act as recovery vehicles and some were used by commanders as mobile map-rooms on campaign.

Today a number of Matador trucks can be seen in museums such as IWM Duxford. Examples also turn up at military vehicle gatherings all around the country and draw admiring glances from onlookers who know the cost of operating such a vehicle.

Owning a Matador is a serious business from buying one to operating it. Matadors do come up for sale and prices can be between £8,000 and £10,000 and a restoration budget starting at around £4,000 should be allowed for. Vehicles for sale are listed on specialist Websites such as www.milweb.net and spare parts can be brought through various online sites including Ebay. The fuel tank holds around 40 gallons and with fuel consumption at around 9 miles per gallon this gives the vehicle a range of 360 miles on a full tank. The up side is that everything needed for a comfortable weekend away can be loaded onto the vehicle with plenty of room to spare.

The Matador can be driven on the road and is exempt from road fund tax, but it will still be required to display a disc which has ‘exempt’ on it. Insurance can be arranged through a specialist broker or advice can be obtained through a club or association such as the MVT or IMPS.  You are not alone if you buy one of these vehicles because it would appear there are plenty of Websites for Matador enthusiasts. The list includes www.aecmatadors.co.uk; www.aecsociety.co.uk; and www.aecmilitant.co.uk

Someone once said that owning a Matador is a ‘…true labour of love…’ If owning one is your particular interest you will certainly stand out in a crowd.