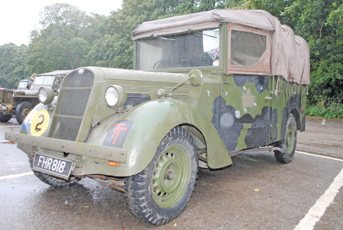 At the start of the war the British Army found itself short of vehicles for a range of secondary military duties such as light transport and liaison duties. Many civilian vehicles were requisitioned and vehicle manufacturers converted their production of commercial cars and vans to use for military roles. These were called ‘Utility’ vehicles - known as ‘Tillys’ for short - which were cheap to produce and run, but above all versatile for operating in light duty roles.

These cars and vans were produced in their thousands by the four leading vehicle manufacturing companies of the day; Austin, Morris, Hillman and Standard. Tillys were used by all the armed forces during the war in all theatres of operation. During the evacuation from Dunkirk in 1940 the British Army were forced to abandon many hundreds on the beaches and these were later repaired and pressed into use by the German Army.

Specifications for Tillys vary between designs and have engines ranging in power from the 8HP for the Austin 8 to 12HP for one of the vehicles built by Standard. Today these little ‘run-around’ vehicles can often be seen in either static line-ups or giving displays of handling at some vehicle shows such as those held at the National Motor Museum at Beaulieu in Hampshire.

Employed by all sections of the armed forces, Tillys were useful vehicles and for their size were important types of transport either between bases and even on a base itself, which made them real ‘Trooper’ vehicles. Private owners continue this role today and use their vehicles to carry all their essentials for a weekend event in the back. The canvas cover is a distinguishing feature and owners pay particular attention to detail in getting a type which is authentic. The roof of the driver’s cab is used to carry the spare tyre and Tillys often turn up to a show in a range of colour schemes from the standard ‘battleship’ grey for the Royal Navy to camouflaged patterns with the white star emblem used on Allied vehicles from D-Day onwards.

They were lightweight 4X2 vehicles and as such can now still be legally driven on modern roads provided they have current insurance. Due to their age Tillys are exempt from road fund tax and are popular vehicles for anyone thinking of becoming an owner of a historic military vehicle. They are relatively economical to run and have a certain appearance to them which does attract attention. The Coventry-based Standard Company produced the ‘Standard 10’ between 1937 and 1940, which could reach speeds up to 65 mph. The Standard 10 was taken into service as a Tilly and measured 12 feet and eight inches in length and four feet and eight inches in width.

Modern owners are often members of an association such as the IMPS or MVT and a special ‘Tilly Register’ has also been set up to list the whereabouts of the vehicles along with their details. A similar register for Austin Utility vehicles has also been established on the island of Malta where a number of owners display their vehicles at events. Tillys are also to be found in military museums such as the Muckleburgh Collection in Norfolk, the tank museum at Lesany near Prague in the Czech Republic and a few museums in France.

The Tilly range of vehicles as a whole is a story of a true survivor. This is evident in the state of some of the vehicles when acquired as restoration projects. Some are found in pitiful states indeed, lacking, as they do, many parts and the bodywork pierced through with rust. Some of these have been discovered in woods and in farm buildings in the UK, but such finds are not limited to Britain as discoveries have been made in France where vehicles have been found being used as chicken coops!  Nevertheless, time, effort and a lot of hard work and money, results in the vehicle being restored.

It is possible to obtain spare parts for such projects through specialist websites such as www.hmvf.co.uk or contacts in owners clubs. Shows where suppliers will be on site such as War & Peace Revival can turn up spares and sometimes items can turn up in the most unlikeliest of places. Fully restored Tillys sometimes come onto the market, and the most obvious place to begin looking for a Tilly is either one of the specialist trade magazines or on the Internet.

The price paid depends on condition and a recent search on the Internet revealed there is a good interest in Tilly vehicles. For example an owner in Malta was prepared for exchanging his Tilly for another historic vehicle and a Dutch enthusiast was searching for either a Morris or Austin Tilly. It is all a question of taking time to search out a good deal.

The Tilly as a range of vehicles was not as exciting as say, the Jeep, because they were not armed and never equipped to operate in the combat role. Jeeps were used in all sorts of combat operations, whereas the humble Tilly was more of a support vehicle used in the rear areas. Because of this they are not seen as being as particularly glamorous, but they carried out an important role nevertheless.

At modern shows they still attract lots of attention. Next time you visit a show such as Duxford or Tankfest look out for the not so humble Tilly.

The Standard Tilly shown in these images were taken at the recent wartime weekend at Pickering in North Yorkshire. Plenty of people were enquiring about it, myself included! GM