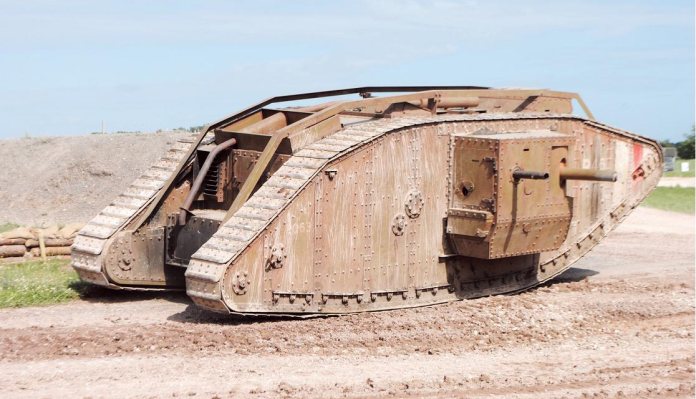 Creating realistic images for films has come a long way over the years since the days of the rather ‘dodgy-looking’ models of ships in the 1957 film ‘Enemy Below’, to the high-tech CGI created for the 2006 production of ‘Fly Boys’. War films are expensive to produce if they are to be realistic, especially when it comes to vehicles and tanks in particular. The original vehicles are very scarce and valuable and some have to be severely limited in the amount of drive time they can be allowed and so alternatives have to be created.

For example, the Tiger tanks which appeared so realistically in the 1970 production of ‘Kelly’s Heroes’ were based on Russian T-34 tanks but the Sherman tanks were real. The list of films in which replica tanks have made an appearance includes the 2001 ‘Enemy at the Gates’ and the 1985 ‘mini-series’ ANZACS. It is the scarcity of original tanks, which means replicas have to be specially built because the older the tank design, the more difficult it is to obtain. The Tiger tank used in the 1998 film ‘Saving Private Ryan’ was based on a T-34, whilst the Marder III SPGs were based on Czech-built 38(t) chassis as the real vehicles were. The latest film to use a recreated WWI tank is the Steven Spielberg production ‘War Horse’, released in 2011.

However, War Horse is not the first Spielberg film to feature a WWI vintagetype tank. Working on the 1989 blockbuster ‘Indiana Jones and the Last Crusade’ the mechanical effects supervisor, George Gibbs, created a tank based on an Anglo- American-design called the Mk VIII (Liberty) or International. The tank entered service in 1920 and was used by the American army until 1932 with a few being used by Canada. After visiting a museum for research purposes, the option to lease a French WW I tank was rejected and it was decided instead to build a full-size working model. A 28-ton excavator was used as the basis around which a framework was added and the tracks were powered by hydraulic pumps, each connected to a Range Rover V8 engine. George Gibbs decided to use steel rather than lighter materials to make the tank move more realistically.

It took four months to build the working model, which measured 36-feet in length, weighed 28-tons and had a speed between 10- and 12mph. Artistic licence was used when it came to the type of armament and a turret was added in place of the penthouse like superstructure on the roof of the real Mk VIII. The guns were mounted in the side sponsons, as they were on the real thing. It worked well for the action sequences but real tank enthusiasts and experienced modellers knew it was not right. For the scene where it is destroyed by being driven over the edge of a cliff, the special effects team used a quarter-scale model to create the effect.

For the 2011 production ‘War Horse’, based on Michael Morpurgo’s book of the same name, it was decided to use a replica tank in the battle scenes and the British company of Neil Corbould Special Effects Ltd was given the job of creating the replica tank. The company has won Oscars and many other awards for its work on a range of other films such as Gladiator. The designers approached the Tank Museum at Bovington in Dorset, which supplied technical drawings from which Neil Corbold was able to build a replica 1:1 scale working model of a British Mk IV tank. This particular design entered service in 1917, which fitted in with the setting of the film and was armed with two 6-Pounder guns in side sponsons and up to four machine guns. The real Mk IV weighed 28-tons, was 26-feet and five-inches in length, 13-feet and nine-inches in width and eight-feet and two-inches in height. It was powered by a Daimler petrol engine, which was rated between 100- and 125hp and could reach speeds up to almost four-mph.

The Special Effects team had also obtained other reference material and using the expertise of the team a very realisticlooking working model was built in only 12-weeks. I spoke with Neil Corbold, who told me that the project was built to a very tight schedule. He went on to explain that building the tank for the film was ‘…a fun project and a labour of love.’ Like the tank in the Indiana Jones’ film, the Mk IV for War Horse is based around a commercial excavator. It looks like the real thing and moving at around 3mph has about the same speed.

Tanks in the First World War were used to crush barbed wire and smash machine gun posts with the infantry following behind them to secure the ground they had attacked. Tactics were developed and the Germans were stunned to be attacked by such monstrous machines. They tried to build tanks of their own design, the A7V, but they never managed to develop an armoured force like the British or French and resorted to using captured examples of the Mk IV.

The original wartime Mk IV tank in the collection of the Tank Museum used to be displayed at certain events but age has now caught up with it and it has been declared too fragile to be used in arena displays. The Museum was planning to build a replica Mk IV of its own, but when the filming of War Horse was completed they were given the opportunity to obtain the replica tank. An agreement was reached and the Museum is now the proud owner of a fine-looking realistic tank from an era which no longer has any veterans.

It was at the 2012 Tankfest that the Museum rolled out the replica Mk IV tank to participate in an arena display for the first time. No one had ever seen anything like it in living memory, as it rumbled towards the barbed wire entanglements in front of the German trenches as they recreated a First World War battle scenario using the Great War Society. Pyrotechnics added smoke to the setting and it was most authentic amid the loud explosions of other pyrotechnics. The tank, looming up through the smoke, looked a fearsome thing and no wonder when confronted by it in the war the Germans believed the Devil was coming at them.

The recreated tank has all the rivets, armour plate, hatches and correct angles and the ‘rhomboid’ shape with the tracks running down the length of the sides, making it virtually indistinguishable from the real thing. The Special Effects team can be proud that they have created such a remarkable model. It would be an interesting scenario if the Tank Museum were to arrange a meeting between the recreated German A7V and the Mk IV to recreate the first tank versus tank engagement, which took place on 24th April 1918. This action took place at Cachy near Villers Bretonneux in France between three Mk IV tanks and a number of German A7V tanks. The Germans were beaten in the attack and Lieutenant Frank Mitchell in one of the Mk IV destroyed an A7V and in the style of Royal Navy tradition tried to claim the prize money for having destroyed an enemy ‘landship’ as tanks were sometimes referred to at the time. His request was turned down. It is a thought, though, for an unusual arena display.

If readers are interested in seeing the War Horse tank in action they are advised to keep looking at the Tank Museum website for updates and news of events involving the tank. This can be found at: www.tankmuseum. org With its faded lettering and mudspattered, battle-scarred appearance it looks for all the world like the real thing. You will not be disappointed at seeing it in action.