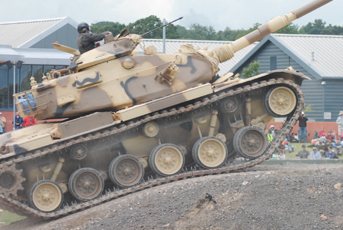 Tracing its influence back to the postwar M48 tank, when it appeared in 1960 few realised how important the M60 tank would become to so many countries around the world. The M60 was produced between 1960 and 1987 during which time some 15,000 were built by Chrysler at the Detroit Arsenal Tank Plant. Even today there are still a large number of M60s in use by armies such as Israel, Brazil, Turkey and Spain, with former users including Austria, Greece and Italy. In each of these cases the countries used the M60 primarily as a gun tank, but they also used variants converted for roles such as bridge laying or recovery. Those vehicles still in service have been upgraded and modified to allow them to still serve in combat roles. Several countries have placed their stocks of M60 tanks in reserve and reduced their tank force as more modern designs have replaced older vehicles.

The M60 served in several major conflicts such as the Iraq-Iran War, Operation Desert Storm in 1991 and, of course, Vietnam where engineering versions were used to lay bridges and a variant known as the M728, designated as a Combat Engineer Vehicle it was equipped with a 165mm gun used to destroy fortified emplacements. The US Army no longer uses the M60, but at one time it was the mainstay of American armoured units during the Cold War. Indeed many NATO countries used the M60 as the core of their tank forces.

In America the remaining stocks are being sold off to various museums and even vehicle owners can purchase them through specialist Websites. The Tank Museum at Bovington in Dorset has an example of the M60 in its collection and it can often be seen taking part in mobility displays on special event days throughout the year, including Tankfest. To keep it looking fresh the museum staff sometimes changes its colour scheme and can remove the large, distinctive infra-red which does alter the M60’s appearance.

The M60 was developed into a range of variants and even used to clear minefields with specialist equipment, but it was the gun version which was the striking force with its 105mm main gun along with a co-axially mounted 7.62mm machine gun and a .50 inch calibre machine gun which was mounted in a fully traversing cupola on the roof of the turret. It carried 63 rounds of ammunition for the main gun including anti-tank rounds and smoke along with 900 rounds of .50 inch and almost 6,000 rounds of 7.62mm for the co-axial machine gun.

The basic version weighed almost 49 tons and was protected by armour up to a maximum of 155mm thickness. The engine was a Teledyne Continental AVDS-1790-2A, 12-cylinder air-cooled which developed 750bhp at 2,400rpm to give road speeds up to 30mph. Like all main battle tanks it was not small but it could be air-lifted by the large Galaxy C-5 cargo aircraft which ﬂew it to the then West Germany and also the Middle East in the build-up for Desert Storm.  It measured 30 feet and six inches overall in length, including the gun, 11 feet and 11 inches in width and 10 feet and six inches to the top of the turret.

Despite this the tank had an operational range of 310 miles and could cope with a range of obstacles including being able to scale vertical obstacles up to three feet in height, cross trenches up to eight feet and six inches in width and ford water obstacles up to a depth of almost four feet. Despite being in service with the Israeli Army it was not a popular tank but in combat against Soviet-built tanks such as the T-54, T-59, T-62 and T-69, it came off very well.

See It At Bovington

Visitors to Bovington Tank Museum enjoy seeing the M60 in action where its demonstrations of traversing at speed is very impressive. It is one of those vehicles which because of the time when it was in service can be used as a backdrop to a range of displays from the Cold War when NATO forces faced the Warsaw Pact in Europe, the Middle East wars between Israel and Egypt, Vietnam and right up to the 1990s with Desert Storm. So not only was it versatile in service it remains versatile in private ownership. The M60 has been used in a number of ﬁlms and either painted or modiﬁed to resemble various tanks including WW II vehicles, but it would be interesting to see one being used in its own guise.

One is most likely to see the standard gun version in private ownership as opposed to, say, the M60A2 version which was armed with a massive 152mm calibre gun/missile launcher in the turret. This is mainly due The M60 in action at the 2012 Tankfest at Bovingtonto the fact that not so many of this type were produced. Other variants are on display at museums around the world and private ownership is something entered into by those who have the space to store such a large vehicle and, of course, the finances to run it. In 1993 the Egyptian army purchased 299 M60 tanks from American stocks at a cost of almost $130,000US per vehicle. These were in good serviceable condition for military use. This is out of the range for most people, but if you want to own a piece of hardware from the Cold War era you have to be prepared to pay for the privilege, but they are out there and can be bought. GM