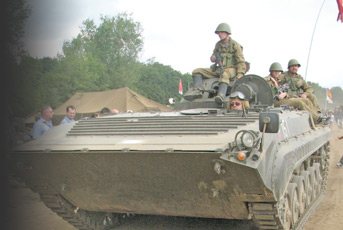 Over the years since the end of the period known as the ‘Cold War’ in 1991 some countries, such as Poland, which were aligned to the Warsaw Pact have changed their position and are now members of NATO. Armies too have changed a great deal during that time and replaced ageing vehicles and weapons with improved systems. The older equipment has either been scrapped or sold off to collectors and dealers. This move means that we in the west are now seeing more former Warsaw Pact vehicles in private ownership at shows, having only ever seen them before in newsreel footage.

One of these vehicles is the tracked armoured personnel carrier the BMP-1 armed with a 73mm gun and machine gun in a turret with a full 360 degree traversing capability. The BMP-1, standing for Boyevaya Mashina Pekhoty which literally translates as Infantry Fighting Vehicle, was developed between 1961 and 1965 with production running from 1966 until 1982 during which time some 26,000 were built by the former Soviet Union or its client states such as India and China which built the vehicle as the Type WZ 501. The BMP-1 entered service in 1966 and although many have been sold off, examples are still in service use around the world.

The BMP-1 was developed into several versions to suit various duties and one of the lasting images of it from the Cold War period was seeing it on exercise deployed with either a ‘Sagger’ or ‘Spandrel’ anti-tank guided missile mounted on a launching rail above the barrel of the main gun. Although used in other roles its main function always remained as an APC to move infantry across the battlefield.  Like other vehicles of the time it was used in combat by client states. In 1973, for example, the Egyptian and Syrian armies used their BMP-1 vehicles in the Yom Kippur war against Israel. The Soviet Union did use the BMP-1 in combat during the invasion of Afghanistan from 1979 until 1989. More recently it was encountered by coalition forces during operations in Iraq.

The vehicle was operated by a crew of three; driver, commander and gunner, and carried an infantry section of eight men. Firing ports were fitted along either side of the vehicle allowing the infantrymen to fire their weapons, usually AK 47 ‘Kalashnikov’ rifles, without leaving the safety of the vehicle. Armour protection was 33mm maximum and up to 43 rounds of ammunition could be carried for the 73mm gun including high explosive and anti-tank types along with 2,000 rounds of 7.62mm ammunition for the co-axially-mounted machine gun.

The BMP-1 measures 22ft 2ins in length, 9ft 8ins in width and 7ft 1ins in height. It weighs 11.3 tons empty and 12.3 tons combat ready. Powered by a Type 5D20 six-cylinder diesel engine, rated to 300hp at 2,000RPM the vehicle can reach speeds of up to 50mph. With a fuel capacity of 102 gallons it has an operational range of 370 miles on roads and 310 miles cross country. It was the first true APC to enter service with the Soviet army and replaced earlier designs such as the BTR-50P and BTR-152 which were open-topped. It has six pairs of road wheels for the tracks with the drive sprocket to the front and the idler wheel at the rear. This allows it to scale vertical obstacles up to two feet and eight inches in height and cross gaps of more than seven feet. The BMP-1 is also fully amphibious, so water obstacles are not a problem.

The vehicle has been displayed in museums for some time but recently it has been seen at vehicle shows, as today it is possible to purchase these vehicles through specialist Websites such as www.tanksforsale.co.uk and others such as Milweb are worth keeping an eye on to see when a BMP-1 becomes available. As with all vehicles prices vary according to condition and the variant type. The better the condition and more unusual the type one can expect to pay more.

When combined with re-enactors portraying Soviet army troops of the Cold War period, the BMP-1 looks impressive. Even on static displays it looks good and provides an unusual backdrop to living history presentations.

Being a tracked vehicle it has to be transported to shows on flatbed trailers, but once at the showground it certainly turns heads and when participating in mobility displays it looks good. Some have been used to show how Soviet infantry would have deployed into action by exiting the vehicle via the pair of doors mounted at the rear of the vehicle.

It was replaced in service by the BMP-2 which is different vehicle altogether. The size of the BMP-1 is large which prevents it from being kept in a standard garage but if shrouded with canvas it should withstand the weather if kept outside. Some readers may find the specifications mentioned here differ from those they may have and whilst this will cause a scramble to reference books it depends on the type mentioned, because the vehicle was altered during its service term with the army. Cross-referencing will help in unravelling these various points but one thing remains, and that is when participating in mobile displays it attracts a lot of attention from other vehicle owners and weapon enthusiasts alike.