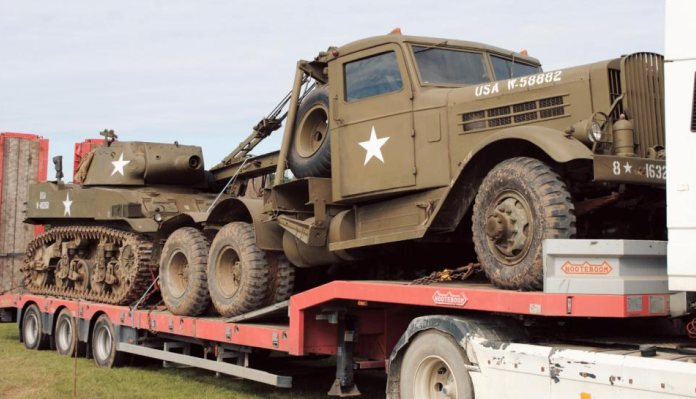 When attending a re-enactment event, visitors enjoy seeing military vehicles and artillery on display and participating in the battle reenactments, yet how many give a thought as to how these things arrived on site? For a very few visitors, it is as though the vehicles somehow just seem to turn up in readiness for the start of the show. For the wheeled vehicles, such as trucks, motorcycles and Jeeps, these are sometimes driven directly to the show by the owners. Some owners prefer to load smaller vehicles onto trailers, which can be towed by modern vehicles, to keep the mileage down. The very big stuff with tracks and heavy artillery poses an altogether different problem. One question which has been on my mind is: how do the tanks and heavy guns get to the shows?

It can never be straight forward to move a vehicle to a show, as any owner will tell you, especially when it comes to moving a tank weighing 30 tons or more a couple of hundred miles, it requires a lot of forward planning and some serious money. To answer the question, which I had set myself, I decided to investigate the matter, to get an understanding. From my time in the army, I knew that even for the military, even with their experience, moving heavy vehicles it is not an easy matter. Arrangements must be made and forward planning to plot a route is important. What I discovered I hope may prove to be of use to re-enactors planning, for the first time, to move large heavy vehicles or artillery to a show.

I first pondered the problem several years ago whilst at a show, where I saw an ex-French Army Gillois amphibious bridgelayer weighing 31 tons and measuring 40 feet in length, ten feet in width and standing over 15-feet in height. Although equipped with wheels, the owner could hardly be expected to drive it to the site, especially as it could only manage three to four miles per gallon. The Gillois’ wheels were only intended for short distances, meaning it must have been transported to the show by specialist equipment. Given its size and weight, the most obvious answer to moving such a thing was to use a fuel-efficient truck designed to carry such heavy loads.

In such cases, a flat-bed transporter is the solution, with an experienced driver who can handle a truck loaded with either a Sherman or Chieftain tank or an M1 155mm calibre ‘Long Tom’ gun. Some owners are fortunate enough to have their own means of transporting tanks and these can be seen at shows but not everybody has such facilities at their disposal. Owner/drivers of these transport vehicles hold Heavy Goods Vehicle (HGV) licences and have experience with moving such enormous loads.

An alternative solution is to make enquiries with a specialist company, such as Southampton-based Pentalver (pentalver. com) which can provide the vehicle and driver if necessary. The company has thirty years of experience in moving large, heavy loads, such as tanks and containers, all over the country and Europe. Companies such as this can do it all for you and deliver the tank to a show. This allows the owner to drive to the show in an ordinary vehicle, whilst avoiding all the headaches, which would go with trying to organise it for oneself.

A spokesman from Pentalver told me some of the logistics behind arranging such a move. He explained that each job of transportation is unique and brings its own set of conditions with it. When a customer approaches the company to, say, move a tank for example, the first thing they need is a full set of specifications of the vehicle to be moved, including size and weight. Everything has to be put in writing, along with a description, because shape is also important. The owner may be asked to supply either photographs or diagrams, which greatly assists in the planning stage. By doing all this, there can be no question of confusion or unexpected surprises to take the driver unaware.

If the vehicle to be moved is over a certain width, then special arrangements will have to be made because, as the spokesman said, you cannot take to the roads with an exceptionally wide load, which is going to cause traffic jams. If moving a very wide load along the motorway, all the authorities along the route to be taken will have to be notified and that is something the transport company can arrange. Some extra-large loads will sometimes require an escort, and this has to be taken into account, also, as it will affect the cost of transporting the load.

I contacted another company Peters & May ( pm-gl.com) based in Eastleigh, which specialises in moving large historical vehicles such as tanks. A spokesperson confirmed most of what I had been told by Pentalver but added some more aspects to consider. For example, he explained that sometimes it is better to plan movement of very large loads, either during the night or very early in the morning, when there is the least amount of traffic about. Peters & May have experience in moving historic vehicles of all shapes, sizes and weights and some drivers know many owners. The spokesperson explained that in some situations, where a type of vehicle to be moved is not familiar with them, they prefer the vehicle owner to load it driving on to the transporter. This is because the owner will know the handling capabilities of their own vehicle. The transport driver will supervise the loading, to see that it is loaded correctly and, once secure, the journey can begin.

The company of Peters & May has even transported double-decker buses and, as a logistics specialist, they can move vehicles to destinations around the world. Each job is dealt with on its merits and has to be planned, taking into account all details. As the saying goes; ‘Always expect the unexpected’. After all the relevant authorities have been notified, the route has to be carefully planned to account for the size of the vehicle, especially the height if there are low bridges to pass under along the route. Weight restrictions are another factor which can affect the route taken. Each job of transporting vehicles is dealt with on its own merit and priced on a mileage basis, with extras being factored in, such as tolls.

Vehicle owners can seek advice from either the Military Vehicle Trust (MVT) or the Invicta Military Preservation Society (IMPS) can ask for suggestions from experienced members of these organisations who have moved heavy vehicles before. Members of these organisations, from previous experience, can suggest a transportation company and some may even volunteer their services to assist a fellow member with the move. That is the great thing about being part of an organisation such as either the MVT or IMPS, where the pool of resources, which have dealt with many unusual moves, can be shared.

Vehicle owners will often move their trucks or tanks hundreds of miles to take part in an event and the same applies for someone moving large pieces of artillery. In the case of participants visiting from Europe, the distance can be thousands of miles and will also involve a ferry crossing. But the result is always worth all the hard work. Even those re-enactors and owners of smaller vehicles who can pack things into trailers, face their own set of movement problems, usually planning an easy route. Non-vehicle owning participants appreciate the fact that if it were not for the dedication and support of owners to get their vehicles or guns to an event, then things would not be the same. The visiting public also understand this and together everybody gets to enjoy the best possible event.