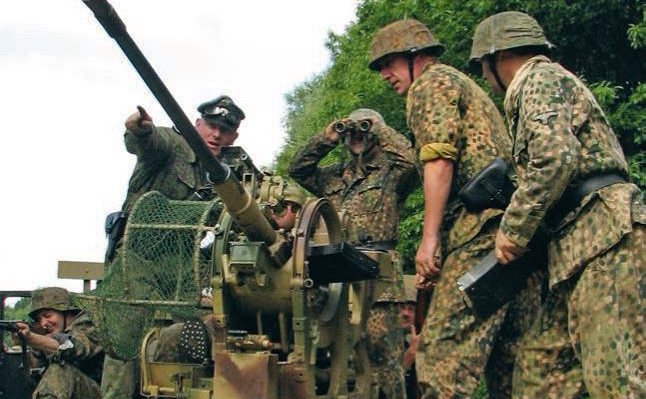 Another sophisticated form of specialist weaponry the German army and Luftwaffe used during WWII was a layered anti-aircraft defence system. Like the army’s anti-tank weaponry it was developed to provide a powerful defence response, but this time against Allied aircraft rather than tanks. The range of anti-aircraft artillery was termed collectively as Fliegerabwehrkanone or more simply as Flak. Like their anti-tank counterparts, the guns developed for the anti-aircraft role ranged from light guns through to medium calibre, including the famous ‘88’, and finally heavy calibre weaponry such as the 12.8cm calibre FlaK 40. They were used in all theatres of operations from Russia to North Africa and across Western Europe.

After WW1, Germany was denied anti-aircraft guns under the terms of the Treaty of Versailles in 1919, but when Hitler came to power Germany soon began a rearmament programme. Among the weapons developed were anti-aircraft guns, which besides functioning in their primary role, would prove capable of engaging ground targets.

To operate these guns, specialist units were formed and on the outbreak of war in 1939, there were 72 such regiments. Each had 60 light, 2cm calibre FlaK 30 anti-aircraft guns in addition to heavier weapons. Even ordinary infantry divisions could have as many as 84 such guns within their formations. Indeed, the level of importance placed on such weapons can be gauged by the fact that at the end of the war the country’s armaments industry had produced some 30,000 light anti-aircraft guns, with the Luftwaffe alone taking almost 17,000 FlaK 30 and FlaK 38 guns into service.

The Flak 30 and 38 were versatile light anti-aircraft guns, with single barrel versions being mounted on a wheeled carriage, called a Sonderanhanger, which could be towed by trucks or light vehicles such as a Kubelwagen. Fourbarrelled versions known as Flakvierling were developed and these could be mounted onto a range of vehicles from trucks to armoured vehicles and even armoured trains.

Historians of weapon development and collectors can purchase items associated with these guns, such as magazines, instruction manuals, ammunition canisters, and even a completely restored example of the gun itself. These can be found by searching specialist websites or they can sometimes turn up at militaria fairs. Collectors purchase inert examples of the various types of ammunition, each with its own colour-coded markings on the projectile head, to build up an impressive display to include several types of HE and armour-piercing rounds.

When attending shows, some re-enactment groups depicting German units sometimes include a 2cm FlaK gun in their static displays. They then demonstrate its role, including the aiming and reloading drills. These are usually single barrel versions shown on the turntable mounting with the crew.

One such group fortunate enough to have a FlaK 38 in its collection is the Second Battle Group (Facebook or www.sbg1. mistral.co.uk), which depicts the SSLAH. This is a blank-firing example that is sometimes mounted on the group’s Opel Blitz truck to reproduce an authentic role for use in arena battle reenactment displays. Even when demonstrated in the static role, the presence of such a weapon draws a lot of attention, especially from modellers who photograph it for reference purposes.

The 2cm FlaK 30 was introduced into service in 1935 and used during the attack against Poland in September 1939. This version fired 280 rounds per minute and proved effective against the slow-flying, ageing Polish aircraft, however, when used against faster, modern aircraft the rate of fire was not sufficient. The armaments firm of Mauserwerke modified the original weapon design to produce what would become known as the FlaK 38. Outwardly it resembled the FlaK 30, but a newly designed breech mechanism increased the cyclic rate of fire to between 420 and 480 rounds per minute and the elevation range was widened. Introduced into service in 1940, the FlaK 38 measured 7ft-5 long and weighed 926 lbs in action. It was slightly smaller and 66 lbs lighter than the FlaK 30. The two designs were in service together for a while, which made perfect sense since they both fired the same ammunition and were transported on the same design of two-wheeled trailer, known as the Sonderanhanger 51.

As the older FlaK 30 guns wore out they were removed from service. By taking off the wheels from the carriage, the guns could be deployed for action on the turntable mounting and traverse and fire through a full 360°. They were used to provide point defence around airfields and other military installations such as harbours.

The elevation and traverse controls were operated manually and although a powered system was considered, it was never installed. When firing HE rounds, both versions had a muzzle velocity of almost 3,000 FPS and a maximum effective ceiling of over 7,000 feet. The FlaK 38 was a much more reliable weapon but its increased cyclic rate of fire meant the crew had to work faster in order to keep the gun loaded with 20-round magazines.

As the Allies introduced faster, better-protected aircraft, the Germans realised that even with its improved rate of fire, the FlaK 38 could not effectively engage these targets. The solution was to fit four barrels in a group onto the Sonderhanger 51 mounting, to produce the Flakvierling 38, which potentially had a cyclic rate of fire of 1800 rounds per minute; an average of 450 rpm per gun. To achieve this level, the crew was increased to seven, just to keep the guns operational. The anti-aircraft sighting unit was the Flakvisier 38, but the crews found this a complex and somewhat fragile item of equipment to operate. They preferred to use the Linealvisier 38 open ring sight.

FlaK 38 barrels were produced for mounting into armoured vehicles, such as the SdKfz 222 armoured car. This was known as the Kampfwagenkanone or KwK 38 L/55, and although it could fire all the same types of ammunition as the FlaK 38 gun, in the ground role it only fired armour piercing (AP) rounds. These had an effective horizontal range of some 650 yards.

All barrels fitted to weapons in the 2cm calibre range, including the FlaK 30, 38 and KwK 38, fired the same type of ammunition, which included AP and high explosive shells with muzzle velocities in excess of 2,700 FPS and 2,950 FPS, depending on the type. For example, the HE Sprenggrenatpatone weighed 0.262 lbs and was used against aircraft at almost 3,000 FPS. The AP Panzergranatpatrone 39 and 40 shells weighed 0.326 lbs and 0.204 lbs respectively, with muzzle velocities of 2,500 FPS and 3,400 FPS. Versions of the weapon were used by the Luftwaffe as well as the Kriegsmarine (navy) and the range of ammunition types increased as the war progressed.

From all points of interest, which includes collectors, re-enactors, modellers and general military enthusiast, this is another example of a weapon which has a wide appeal. Seeing it in a museum is interesting, but to watch as it is being demonstrated outside by a reenactment group as it is put through its paces, is an incredible display. However, even better, is to see a FlaK 38 being fired with blank rounds at a show, as the moment is transformed into an unforgettable experience.