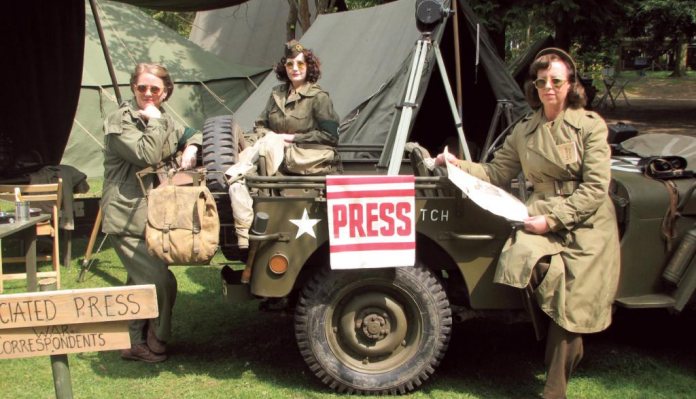 In this modern day of equality, we are used to seeing female reporters covering war zones from Syria, Iraq and Afghanistan. These brave ladies, such as Caroline Wyatt of the BBC and Stephanie Soh of the Independent are following in the footsteps of Kate Adie, who covered war zones across the world, but she too was following in the path carved out by the likes of Martha Gellhorn and Lee Miller of the American-based Associated Press in WWII.

Such fearless women didn’t so much break the rules, but destroyed them in venturing into the battle zone to get the story. Traditionally, men had been the only journalists who could report on war but gradually women proved that they were up to the task. Some had tried in the First World War, but it was WWII which gave them the opportunity to show what they were capable of and more than the equal of their male counterparts.

The Associated Press Agency was founded in 1846 to supply stories to the growing number of newspapers, all eager to get the latest news out to their readers. By the time of WWII, it was supplying photographs and stories from around the world, provided by journalists who were reporting on the most important moments in history. Among the ranks of mostly male reporters was a small coterie of female journalists and it is these ladies who Claire Thorpe and Francine Tranor, two very experienced re-enactors, are paying tribute to with their latest recreation.

I have met Francine and Claire at several events, but it was at Tilford, back in May this year, that I first saw their portrayal of female war reporters. When I saw them at Tankfest in June, I knew I had to find out more about this latest display. Female re-enactment has come a long way in the past few years and new representations, such as this, show how diverse the role of women was during the war. They told me how they came up with the idea of recreating female war reporters about three years ago in order, as they put it, ‘to do something different’. This they have certainly achieved.

In doing their research the two ladies uncovered a wealth of information concerning the women who reported on the war. For example, Marguerite Higgins, who covered WWII and later the Korean War, Ruth Cowan and Helen Kirkpatrick who reported on the London Blitz, North Africa and went on the report on the war in Europe. These were tough, nononsense ladies who would go to any lengths to get their story. Martha Gellhorn, for example, reported on the Spanish Civil War and disguised herself as a nurse to get aboard a hospital ship to cover the D-Day landings. As she said: “I followed the war wherever I could reach it.”

It is this kind of determination that Francine and Claire are commemorating with their presentation. They visit militaria fairs where they pick up items which are relevant to their display, such as typewriters of the period, original cameras and other pieces, including uniform. Claire is the proud owner of a Jeep, which she shares with her husband. For displays, it is decked out with a sign, on which is emblazoned a pennant to declare ‘Press’ exactly as it was during the war. The Jeep also serves as a platform for the movie camera mounted on a tripod. This aspect of reporting was largely a male preserve and for this depiction the ladies are joined by their husbands for authenticity.

It was explained to me that they can’t show the whole display at once and this allows them to change the presentation. I have seen the Associated Press twice this year already and I can say that on each occasion I was drawn to see more. At Tilford in May, the ladies had a third friend with them and at Tankfest in June the display was completely different. Watching them just sitting on a stool at a typewriter it is easy to imagine it for real.

These Ladies of the Press have hit on something original and are doing it to very high standards. They are showing how women worked in a male-dominated environment and succeeded. In doing so, they have brought another dimension to re-enactment events and depicting something which not many people have heard about. Francine and Claire explain how these female reporters had to work with all the restrictions of the time imposed on them and, at the same time, fight against the prejudices.

Whilst their depiction is of the Associated Press, they explain how female war reporters worked in other countries, including Russia, Germany and British Clare Hollingsworth who worked for the Daily Telegraph. In September 1939, this lady was on her first assignment in Poland and the events which she saw gave her the world exclusive when Germany attacked. Clare Hollingsworth reported on the war in the Middle East and continued to cover post-war conflicts, including Vietnam. She died at her home in Hong Kong earlier this year aged 105-years.

During the war, the female reporters would hitch rides with troops, male colleagues or simply ‘borrow’ a vehicle. They provided their own clothing or perhaps a unit they were working with would provide uniforms, but they never carried weapons. For that reason, photographs often show them wearing different items of uniform and that is exactly what Francine and Claire portray. This keeps their portrayal fresh and together with stories of the ladies who did it for real, theirs is a fascinating display to visit.

Re-enactment displays do not have to be big or full of weapons to be interesting, and the Associated Press is a perfect example of that reasoning. If it wasn’t for the reporters and photographers, we would not have read about events in the newspapers, or seen the images. This is something we tend to take for granted. It was the photographers who landed with the first troops to get the images and this is something the Ladies of the Associated Press explain so well. The news stories these brave ladies covered included all the hardships endured by the troops and they never flinched, even when entering the camps such as Belsen, to expose the horrors to the world.

Clare and Francine are doing a terrific job in displaying such different aspect and proves, once again, how diverse re-enactment is when somebody comes up with an idea. I would suggest keeping an eye open for these ladies at events; you will come away very surprised after having seen their display.