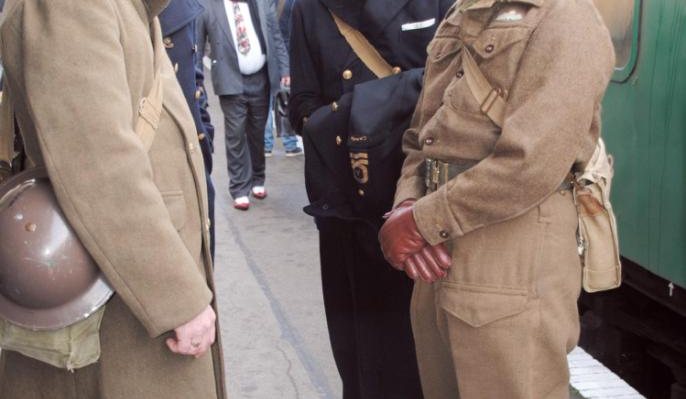 During the Second World War, the railway network was a vital artery for Britain, being used to transport troops and supplies around the country and getting people to work. The railway was vital in keeping the country together socially, as troops returned home for leave, and to move evacuees from the bomb-ravaged cities into the safety of the countryside. Ownership of cars was very low and as a means of public transportation railways were essential.

This aspect of the era has now become part of the re-enactment circuit and heritage railways regularly organise special weekends to recreate the nostalgia of the age using steam trains. The popularity of these events is reflected in just how many now feature 1940s weekends in their schedule. One of the most popular is the Mid Hants Railway at Alresford in Hampshire, better known as The Watercress Line. The wartime weekend event ‘War on the Line’ has been attracting large numbers for some years, but a more recent addition is the ‘Christmas Leave Train’.

The winter months are a very quiet period in the re-enactment calendar and over Christmas everybody gets a bit fidgety and look for something to get out of the house. The Watercress Line came to the rescue and introduced the Leave Train weekend. From the very first event it proved popular, not only with re-enactors, but also the general public.

Just before Christmas, the Watercress Line invited me along to see how the event is developing. I have been invited before and it’s always good to go back again because you meet up with re-enactors and see something different. The last time I attended, I compared the event to the classic 1945 film ‘A Brief Encounter’ starring Trevor Howard and Celia Johnson and I’m pleased to say the atmosphere of the event is still the same. The Christmas Leave Train is attended by a mixture of civilian re-enactors and others in a variety of uniforms from army, Royal Navy and RAF, just as though they were going on leave.

Some people carried weapons, but they were not displayed prominently. Mainly they were rifles carried slung over the shoulder, very reminiscent of wartime photographs and all very nostalgic. Civilians and service personnel travelling on the same train was a great photographic opportunity and the perfect ‘get away’ for re-enactors. With a regular timetable schedule, it was a relaxed event and it was possible to get off at a station and catch the next train. This is an event to be enjoyed by young and old alike and indeed some re-enactors did attend as a family group in period dress.

During the journey, tickets are checked and ‘punched’ in the traditional way and at the main station of Alresford there was entertainment and a display of period vehicles, including a few Jeeps. Adding to the atmosphere were a few American troops, just to remind us that as our Allies they too travelled by train as they went on leave or returned to their training camps.

War on the line

The Watercress Line has already organised its summer 1940s weekend called ‘War on the Line’, which will be held 10th - 11th June, with a regular schedule of steam trains running on a timetable between the four stations along a 10-mile stretch of track. The ticket allows you to ride all day if you wish to and some re-enactors do just that. There are seasoned travellers who pack a picnic to enjoy the whole experience and soak up the atmosphere including entertainment. The War on the Line features displays at each of the stations and is a great event with lots to see.

If you have never visited an event at the Watercress Line, I recommend you go along because you will not be disappointed. This is a great weekend for Home Front and Allied re-enactors and you’ll wonder why you had not been before. I would like to extend my thanks to the all the staff at the Watercress Line for the facilities and the invitation; you were all so very kind.