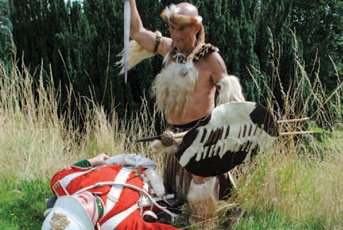 When Queen Victoria’s reign began in 1837 some 12,000 Boer farmers in South Africa decided to undertake a mass migration called the ‘Great Trek’ to move away from British control. When she died in 1901 after a reign of 64 years the British army was engaged in fighting the Second Boer War which probably involved the descendants of the Boers from events in 1837. The National Trust property of Tyntesfield near Wraxall in North Somerset managed to capture some of the flavour of the period when it hosted ‘Victoria’s Soldiers’ over a weekend in August. It was a fitting location because much of the house was developed during Victoria’s reign and refiected the period being portrayed.

During the Victorian period the British Army fought many campaigns but for the weekend the focus was on the Crimean War of 1853 to 1856 and the Zulu War of 1879.

The strength of the British Army in 1854, the year when it fought the Battle of Inkerman, stood at 140,000 all ranks. It continued to increase as more campaigns were fought and by 1879 there were around 192,000 soldiers serving in the ranks. During the period many new weapons were introduced and scientific advances such as telegraphy changed the ways in which wars were fought. The growth of steam railways and steam-powered ships transformed the way the army was transported.

As I approached the encampment seeing all the tents arrayed in orderly lines it was like stepping back in time. I have experienced this sensation before, but it is never more obvious than with Victorian events such as this. There were three main groups participating in the event, along with some smaller displays to recreate a sample of a soldier’s life in those times, and the first group I met was the Rifie Brigade Re-enactment Group.  Set up almost three years ago by James Deering, his brother and their father, this group has about nine members and have put on displays mainly at National Trust properties and a couple of other venues. Their depiction is Crimean War for which they carry three-band Enfield rifies which had replaced their Baker rifies.

The uniform is dark ‘Jaeger’ green which is distinctive and they certainly look the part along with their shakos. They have produced their own equipment and uniforms and a contact in Russia supplies them with the metalwork for their kit using original designs. Field drills have been well researched and the group put on a demonstration of fire and movement of the period. They were joined by the 19th Regiment of Foot (later to become the Leicestershire Regiment). This group was also armed with the three-band Enfield but they wore the scarlet tunic which made them stand out at a distance. Together both groups demonstrated bayonet drills and massed firepower from their rifies.

The tents were typical ‘bell-type’ of the period and laid out according to the manual of the day. Knowing how harsh the winters can be in the Crimea it is easy to understand how the British Army suffered appalling casualties given such inadequate equipment. In fact the British Army lost some 22,000 dead during the war of which more than 16,000 died of disease, such were the conditions. They were cooking food on ‘Soyer’ stoves which had been invented by the French Chef whose name they carried and were used by troops on campaign throughout the 19th century. In fact, the type was still being used in the 1980s such was the cooker’s usefulness. Other items such as stools and tables along with pots and pans were all true to the period and brought the camp fully to life.

Women in the Crimea

Apart from the soldiers there were a number of women showing various aspects of life in the Crimean War to remind us that wives also shared the hardships of campaign life. They showed how food was prepared and a couple of them depicted Florence Nightingale’s nurses. I was reminded of the strange but true story of Dr James Miranda Barry who served in the Crimea and was appointed Inspector General of the Army Medical Department in 1858. He served in posts across the British Empire from Canada to Malta and many points between. Dr Barry was an accomplished surgeon but had something of a temper and rumour has it he fought a duel – and even had the temerity to argue with Florence Nightingale! The story sounds rather unremarkable, but for the fact that after his death in 1865 it was discovered that the good doctor was, in fact, a woman.

One young girl by the name of Sarah Smith had created the colourful uniform of the French ‘Vivandières’ serving with the 18th Regiment of Infantry. She was part of the Rifie Brigade Group but was quite separate in her presentation and really stood out. Sarah explained that she had taken her time putting the uniform together because some of the detail could not be rushed. She continued by explaining how the appearance of the Vivandières, who were highly respected by the French troops and had regulation status in the military, would upset English ladies such as Fanny Duberly, not because of their role or status but rather because these brave ladies wore trousers. If these French women walked into a room the English women would leave or make it uncomfortable for French women to remain. It is good to see female re-enactors expanding their roles and taking an active part in events.

The third group on site was the ‘1879 Group’, several members of which had formed themselves into a gun crew. They usually portray No 1 Depot Company Garrison Artillery but for the weekend they were depicting ‘N’ Battery 5th Brigade which was wiped out in the massacre at Isandlwana. The gun they were using was a version of a 4-Pounder field gun scaled-down to about a quarter of the original size. The group had the assistance of Colin Carpenter who provided drawings of the original weapon which were used as reference. The carriage was built by the group and a pair of match wheels was obtained to fit the axle. The barrel was cast in Cornwall by Irons Brothers at their Wadebridge Foundry (www.ironsbrothers.com) and is proofed to a powder charge of two pounds which is quite remarkable for a recreated weapon of such a compact size. The barrel is lined with a sleeve of high grade hydraulic tube like a swaging process used on artillery and the crew uses a charge of four ounces when firing at displays. The effect is still effective as they go through all the loading drills according to the manual.

The three groups combined to put on a display of musketry against the Zulu nation which in this instance comprised of just one man! This was Danny Tully who very bravely turned out in full Zulu warrior garb of loin cloth, head ring, animal hide shield and assegai stabbing spear and not much else. I have known Danny for some time but I had not seen him recently and his depiction took me by surprise. Re-enactors may know Danny as being involved with American Civil War re-enctment, but here he was looking like an extra from the 1964 film ‘Zulu’. Danny proved very nimble on his bare feet and dashed about like a young gazelle. He hopes his efforts may inspire others to join him in this depiction. If there are any interested potential recruits for the Zulu impi visit the group’s Website at: www.1879group.org

Danny explained how he got the idea for recreating Zulu warriors to expand the group’s presentation and during a recent trip to South Africa he picked up some items, including shield and knobkerrie club the Zulus used. These he brought back and began wearing at events. At Tyntesfield he was persuaded to set up a small scenario with a couple of soldiers in scarlet tunics to recreate a scene from the war using the long grass. First he demonstrated the thrusting of the assegai and then the bayonet of the British Army against the Zulu. It was very impressive and most realistic.

There was hardly a year during the reign of Queen Victoria when the British Army was not on campaign somewhere in the world, which is hardly surprising given the size of the British Empire. Many of the wars from this time are well-known, but on 27 August 1896 the shortest war in history was fought. It latest approximately 40 minutes and is known as the Anglo-Zanzibar War. It was a very much one-sided affair with the British suffering one wounded man and the Zanzibar forces suffered 500 killed and wounded. It was the complete opposite to the Crimean War and Zulu War which claimed the lives of thousands and serves to show the contrast in fighting in the 19th century. Tyntesfield provided a ‘snapshot’ look into a period which holds so much military history, and more will be revealed as time goes on.

The Victorian period is very popular with militaria collectors, with dealers carrying an extensive range of items to meet demand. The Victoria Cross was created which is outside the budget of most collectors, but there are many other items, including photographs and letters, to collect. Various original items such as medals, regimental badges and uniforms can be purchased from militaria fairs or specialist auctions, many of which are listed in the pages of Gun Mart. It was our old friends The Diehards who set the standard for other groups intending to recreate the Victorian Army and it is good to see the period getting a stronger representation.

Reproduction equipment and uniforms are available from suppliers such as the Bournemouth-based Sutlers Stores (www.sutlers.com) Leeds-based www.thehistorybunker.co.uk and the forum site at www.victorianwars.com lists a number of suggested retailers. The classified adverts in Gun Mart also feature items for sale from the Victorian period from de-activated weapons to items of equipment and uniform. If anyone is interested in knowing more about the Rifie Brigade James Deering can be contacted by Email at: jamescdeering@yahoo.co.uk GM