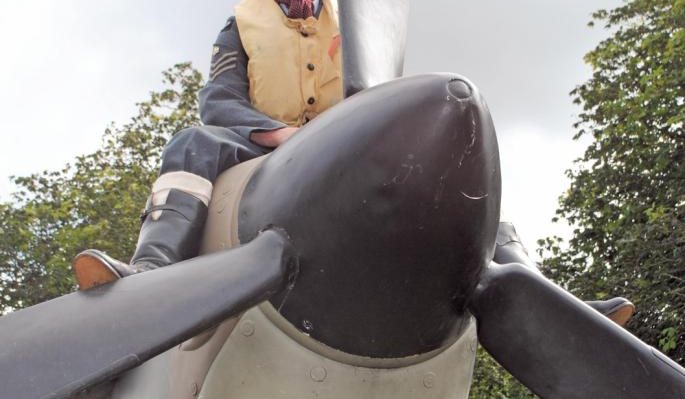 In the 33 years that it has been running the War & Peace Show has undergone many changes and moved with the times to keep pace with interests and maintain a freshness about it. Two years ago it moved from the Hop Farm to its present site of Folkstone Racecourse and changed its name to include Revival. The show has weathered many rumours, all of which were unfounded, and came through to survive. However, nothing could have prepared the regulars for the bombshell news, which came direct from the show’s organiser, Rex Cadman himself, who announced that this year’s show was to be the last.

The show is always full of surprises and so it was that by the time the gates to this year’s show opened on Wednesday 22nd July, the official news was that W&PR had been taken over by a new owner in a deal made with Rex. The sigh of relief was heard far and wide and the show went ahead as usual.

As usual the show commemorated a number of milestones in the history of the British army which this year marked the 70th anniversary of end of WWII, 200 years of loyal service to Britain by the Gurkhas and 75th anniversary since Dunkirk.

The site had been divided up into a number of areas which makes it easier to orientate your location and get around. The traders’ area has been named after the five Normandy beachheads and other areas, such as Patton’s Field, is where the WWII vehicles are displayed. The Living History site is large and groups establish their displays with some very imaginative presentations. Wandering around the groups there is always something to see and lots of strollers.

One regular face was Titus who comes over from France to put on a display and this year was depicting French Foreign Legion in the Sahara. Just then a pair of strollers walked by wearing uniforms of the Imperial Japanese Army and their appearance would have satisfied any collector’s wish. They looked as though they had stepped out of a uniform book with every facet being perfect. It is moments like this which sets W&PR aside and re-enactors really go to a lot of effort to turn out to this standard.

Through Time and Space

This year there were around 120 re-enactment and living history groups presenting displays from both world wars, the Cold War, Vietnam and other conflicts such as South Africa. The Home Front display area has grown and now resembles a small village complete with shops, pub and gardens. The displays, talks and demonstrations here are extremely popular as people spoke with Home Guard, village policemen and civilians. A wartime wedding went down well and was the best of its type I have seen at an event. The police joined in by forming an arch of truncheons for the bride and groom and even escorted the bridal car by blowing their whistles. All great fun and a distraction from the military displays just the same as a real wedding would have done during the war.

I spoke to some of the ladies here and asked if they would recreate a famous photograph which appeared in the Picture Post magazine in 1942. It showed a group of ladies in the Women’s Voluntary Service, WVS, being given instruction in the use of a rifle. I have done the image before, but the display has improved so much that that I wanted to do it again. The ladies were enthusiastic and using a rifle loaned by the Home Guard we were able to achieve a much better result this time. The lady holding the rifle looked very comfortable with it and I asked if she had ever fired a weapon. She told me she had when she served in the Women’s Royal Army Corps in the 1960s.

As I wandered around I met a charming young girl wearing what was obviously a uniform from the period of WWI and carrying a rifle. She was Jennifer Mason-Hawke who has been re-enacting for eight years. I asked her about her uniform and she explained it depicted a sergeant in the Serbian army circa 1914. This is a role she has been portraying for three years because, as she said, she “wanted to do something a bit different”. This she certainly has achieved and the result turned more heads than just mine. Jennifer has done her research well and told me that women served in the Serbian army and were more emancipated than western European women. She was carrying a rifle which she explained was a Steyr-Mannlicher carbine and standard issue for the Serbian army.

There were splendid-looking airmen walking around, such as Mike Bedford- Stradling and John Goodman depicting pilots of the Royal Flying Corps. They were portraying Middle East theatre in 1916 and told me their group was called Dawn Patrol. Not all such strollers were serious and a pair of characters wearing RAF uniform and sporting fake moustaches were very lighthearted.

They reminded me of the cartoon characters known as The Two Types drawn by the artist William John Philpin Jones from 1943, but they were army officers. Sometimes you need a diversion from all the serious stuff and these chaps provided it.

The British Army of the Rhine, BAOR, was Britain’s contribution to protecting Western Europe from aggression by Soviet Forces during the period known as the Cold War. There are many vehicles from the period displayed at the show, such as Ferret, Saladin and even Chieftain tanks, and there have been some groups. I spotted a chap in the prone firing position holding an L1A1 SLR rifle fitted with a ‘SUIT’ sight and wearing camouflage combat kit from the 1970s period complete with the 58 Pattern webbing. The group were called the Royal Union Rifles which was a fictional Light Infantry regiment created in order to give more flexibility in displays. The equipment, uniforms and weapons are all genuine but the cap badge is made up. They certainly look very good and unless one examines the cap badge carefully it would pass unnoticed, except by a collector.

As usual the show had attracted reenactors, traders and vehicle owners from across Europe and there were German nationals depicting German soldiers. At last year’s show I had met a stroller from Germany who was depicting a WWII German policeman and had with him a Czechoslovakian breed of dog known as a wolf dog which was used at the time. I was pleased to see him back again, this time with a couple of friends and a display of a wartime German police station. He was busy stamping documents in a most officious manner so I felt I could not interrupt him in his work. I decided to photograph him whilst he was absorbed in what he was doing and I think the result looks better than a posed image.

There are many anniversaries the show could commemorate, as I was reminded when Stuart Beeney of Rolling Thunder emailed me to ask if I could mention something about the 40th anniversary marking the end of the Vietnam War. This request made it one of my priorities when I entered the site of the show and I went along to the display of Rolling Thunder.

The group always puts on a very good static display to visit and as usual they had a range of weapons, vehicles such as the Gun Trucks and other equipment used during the war.

I spoke with Stuart and we agreed that something should be done about Vietnam. The display opposite was the site of the American Infantry Preservation Society, AIPS, and I dropped by to talk things over with them. Between us we arranged that I would go into the battle scenario with the AIPS later in the week. With that sorted, it was time to take stock and look around the show. There is a lot to get around and no time to waste.

In another part of the Living History display field I saw my old friend Greg Hall and the rest of the Military Assistance Command Vietnam-Studies and Observations Group or MACV-SOG which always have an impressive display at War & Peace Revival. During the Vietnam War the MACV-SOG undertook extremely dangerous missions to rescue pilots from behind enemy lines and conduct long-range patrol to gather information. At this year’s show they were accompanied by a new section of the group who depict indigenous troops and were positioned in a trench where they demonstrated weapons used during the war. One of these was an M79 40mm grenade launcher or Blooper Gun. This turned out to be an airsoft weapon and the firer charged the projectile with compressed air from a refill canister. He then loaded it in the normal way and fired the weapon. The action released the air charge with a ‘bang’ but the projectile remained in the weapon to be refilled. It was a sound effect demonstration and worked very well and was very convincing.

As regular readers will know, I have a wish list of images I like to recreate with re-enactors, and the result can be very impressive. One of the images I managed to recreate involved a couple of members from the 101st Screaming Eagles and a helpful German reenactor from the Second Battle Group. They recreated a scene which has been used in many books and research has identified that it is Sergeant Wilbur Shanklin of the 506th PIR taking an unknown German prisoner at Turqueville just outside Ste Mere Eglise. The effect we achieved between us at such short notice was very passable. This is reenactment at work in recreating history.

Another image I wanted to recreate was something I had spotted in this year’s programme for W&PR which showed a pilot sitting on the engine cowling behind the propeller of a Spitfire. Talking with the RAF group which display with Rex Cadman’s replica aircraft we managed to recreate the image. Afterwards I did some background research and discovered we were honouring Sergeant Pilot John McAdam of No 41 Squadron. He was aged only 19 years old at the time and fought during the Battle of Britain. He shot down a Dornier 17 bomber and a Me 109 fighter and was shot down himself in turn but survived. Sergeant McAdam was shot down and killed on 20 February 1941 by the German fighter Ace Werner Molders. It was a fitting tribute that we should recreate his image.

Come Fly With Me

The W&PR Show is attended by many ladies as re-enactors, and some come along because they are collectors. They like to work around the traders’ stands for items and my wife, Elizabeth, is one of those who does that. This year, as a treat, I thought I would surprise her by arranging a flight in a vintage aircraft. I used the link from the W&PR website to contact Vintage Aero which arranges flights in several different types of historic aircraft. Elizabeth enjoys re-enactment shows but this was a special treat for her. Without her suspecting anything we drove to the grass airfield which Vintage Aero uses. Standing there on our arrival was a Tiger Moth DH82a, which is over 80 years old and was used by the RAF during the war. She could not believe it was meant for her, even as the pilot strapped her into the cockpit. The weather conditions were perfect and she enjoyed a great experience in the skies over W&PR, then flew along the White Cliffs, Dover Castle and the Battle of Britain Memorial at Capel le Ferne. It was a thrilling experience and she recommends it for anyone who wants an unforgettable memory of W&PR. She took some great photos. In next month’s issue I will feature my experience in battle with the AIPS and cover the vehicles. The future of W&PR is secure and I will give more details and the date for next year’s show.