Wartime in the vale 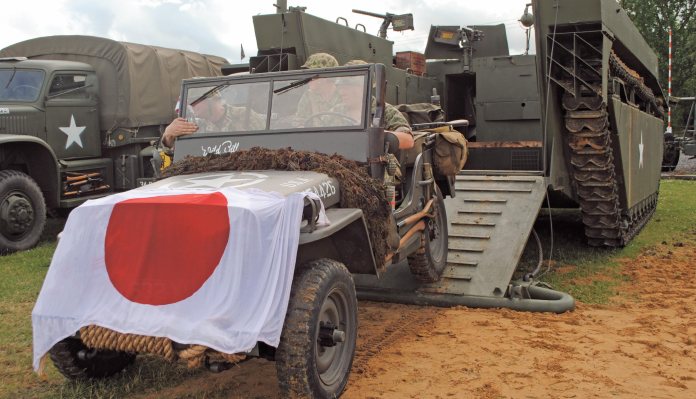 Lying at Badsey in the heart of the Worcestershire countryside is Ashdown Farm, near to Evesham, where for the past several years a team of organisers have been holding an event known as ‘Wartime in the Vale’. The show manager, Paul Valiadis, invited me along to see the event and what it offers re-enactment groups, vehicle owners and traders. I have to say at the beginning, it offers an awful lot and I think there is yet more to come.

This year’s event was held over the weekend of 20th - 21st June and as soon as you walk onto the site it opens up before you with displays, vehicles and traders’ stands. The site is not overly large, only 40 acres, but there is a lot packed into it without feeling crowded. The landowner, Bob James, is a military enthusiast and, over time, he has rescued various buildings from the wartime period and reconstructed them on part of the site to create what has become known as ‘Ashdown Camp’. These include Nissen huts, an unusual air raid shelter known as a Stanton, along with other miscellaneous types. The Stanton shelter was rescued from the nearby RAF Honeybourne, which during the war had been a base from where No 24 Squadron flew Whitley and Wellington bombers. Bob was personally involved in the rescue of this shelter.

The site is not ordinarily open to visitors except for this one annual public event. With its original buildings Ashdown Camp has been used as the location for filming period dramas such as The Land Girls. It also perfect for training weekends by re-enactment groups and bookings can be arranged through the website at: www.ashdowncamp.webs.com.

There was an international line-up of over 450 vehicles from the MVT, ranging in size from motorcycles to Scorpion and Scimitar CVR(T)s. The vehicles from Germany, America, France, Britain and Russia, ranged from pre-war to the 1980s, with some very unusual types on show. There were also 37 re-enactment groups and various displays from WWI to Vietnam. The period of WWII was well-represented with vehicles and static displays. The Nissen huts house exhibitions of Home Front, RAF plotting room, hospital and one has been turned into an armoury where a display of weapons is on show. There are some very nice items contained in this building from pistols to rifles and SMGs and machine guns such as Brens and a Russian Maxim.

A full programme of events had been arranged and there were also displays in the arena, including a ‘car crush’ and gun firing by The Garrison with a WWI 18-Pounder field gun. Some of the groups were familiar but others were new to me because of the location of the event.As always, though, the groups were very friendly and enjoyed having a chat. It was remarkable how far some groups had travelled to be on site, such as the 29th Infantry Division, ‘The Bedford Boys’, which had come over from Wales. My old friend Kevin Drake who portrays Home Guard had driven from Weston-super-Mare which demonstrates the attraction this event has.

From The Watch Tower

The wartime buildings at Ashdown Camp make it seem as though you are stepping back in time and wandering among them one sees some items probably never seen before. For example an ARP Warden’s Consol Shelter, constructed from sheets of iron welded together to form a sentry box, it was used by firewatchers during air raids. The building with the display of hospital equipment included beds made up with clean sheets ready for the patients. I was kindly allowed access up the watch tower, from where I could photograph the site, and I have to say the display looked even more impressive from this vantage point.

This event has developed a very good balance between vehicles and reenactment displays and together they serve to complement each another.I spoke to the Garrison as they were cleaning their 18-Pounder gun after the firing display. They had arranged various artefacts from technical implements to predict the fall of shot during a barrage to the shells themselves. They had a Ford Model T motor car of the period which were used in their thousands by the British Army during WWI. The bonnet had been lifted back to reveal the engine which showed some battlefield improvisation in maintenance. One of the leads from the spark plugs was wired up with a length of barbed wire. I asked if it was for effect and was told that it actually worked. It was explained that in battle anything handy was put to use to fix a problem. Here was an example of that, and the fact it actually worked was amazing.

Over in the buildings were interpreters in period clothes to explain aspects of domestic life on the Home Front, including a school teacher. Another building had a display of an RAF plotting table complete with telephones and sound effects with wartime recordings of pilots reporting. It was all very effective and actually more complicated than it looks. Neil Hunt was showing items used by the Leicester Home Guard, which included hand grenades, ammunition for the Northover Projector and other equipment. It was his personal collection and looked just like a museum display, but with the added advantage of being able to ask questions and be given answers.

Just as wandering around re-enactment displays turns up something interesting and unusual, so too does wandering around vehicles, especially such a diverse range as at Ashdown Camp. There were Jeeps in all shapes, dates and forms galore. Into the 1950s there were Ferrets, Humber ‘Pigs’as used in Northern Ireland and enough Land Rovers to move a medium-sized army. Suddenly, there amongst all this hardware, I spotted a rarity in the shape of a Simba APC built exclusively for use by overseas police forces and paramilitary units. Dating from the 1980s and built by the company of GKN Sankey. I had seen this vehicle being displayed and watched its development back in those days and to see one at this show in private ownership was incredible. I spoke to the owner, Paul Wallis, and he explained he worked for the company and built Simbas. He continued by saying this is the only example of this vehicle in private ownership.

A specialised WWII Landing Vehicle Tracked nicknamed the ‘Buffalo’ drew a lot of attention and even though I had seen it before, even in the sea, I was drawn to it. This particular version is a late war model and the owner does not think it was ever used in combat. The LVT as the title says was a tracked amphibious vehicle designed to land troops, equipment and vehicles on the beaches during the Pacific Campaign as US Marines assaulted one island after another. High-sided with a rear ramp the Buffalo was armed with machine guns for defence. In this instance it mounted two .30 inch calibre and two .50 inch calibre machine guns.

The Buffalo had completed its arena display and now parked up with its ramp down, this was an ideal opportunity for a photoshoot. The re-enactment group depicting the US Marine Corps was camped alongside and I know Alan Jones of old and he very obligingly agreed to take part in setting up some photographs. The chaps from the group aimed the machine guns just as they would have been during an amphibious operation landing on the islands such as Gudalcanal, Iwo Jima, Tarrawa and many other landings.

It then occurred to us that with the ramp down, this was a good opportunity to get a Jeep involved. It did not take long to track down the owner of a Jeep and once I explained what it was for he readily agreed. He reversed his vehicle onto the ramp and the Marines produced a Japanese flag to drape over the front to conceal the markings and give drama to the image. The chaps got in the vehicle and it was complete. Even though I say so myself, it was a good job well done only through the co-operation of everybody.

The show reminded me of a scaleddown version of War & Peace in the vintage days when it was at the Hop Farm and known as Beltring. The pace of the day allows time to look around the trade stands and there were some very nice items of collectables on sale. I picked up a few items and the prices were very reasonable. This is a very good show and I predict it will continue to grow. The site is like an exclusive location for WWII reenactment groups where they can come and practice for an entire weekend without any interruption. Sleeping accommodation in bunk beds can be arranged for those who enjoy their comfort. Instruction in the use of pyrotechnics can also be organised for those groups wishing to put something extra into their displays. The site owner, Bob James, is interested in acquiring more period buildings for the site and would like to hear from anyone who has news about any building which can be moved to Ashdown Camp.

I would like to extend my sincere thanks to Paul Valiadis for his hospitality and his extremely helpful team of co-ordinators. If this is what they have achieved in seven years, think what can happen in the next seven years. This is a show I will return to next year and recommend you put the date for it in your diaries which is the 18th and 19th June 2016. The team is already hoping to have another wartime building, an RAF mess hut, ready in time for the show.