Wartime in the Vale 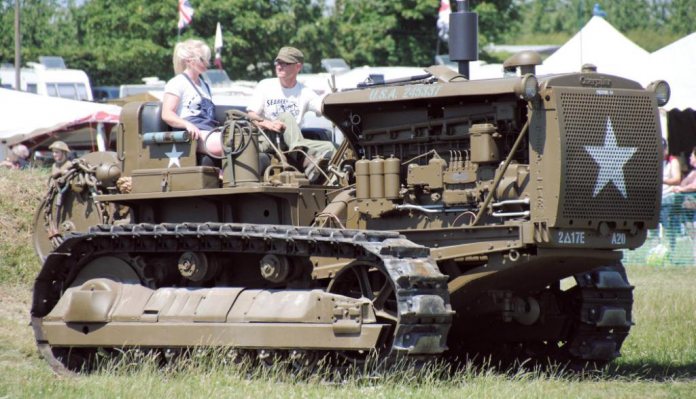 In the several years since I moved to Somerset, I have discovered many new re-enactment events and been invited to visit some of them. They vary in size from small, local events, through to larger shows, which attract a wide following in both visitors and participants. One show, which I have visited on three or four occasions, is the Wartime in the Vale held at the Ashdown WWII Camp, Ashdown Farm, Badsey, near Evesham, Worcs. WR11 7EL.

Now in its 10th year, Wartime in the Vale was created by military enthusiast and vehicle owner Bob James, who was ably supported in his enterprise by his wife Shirley. Sadly, Shirley passed away in 2014 and Bob passed away in 2016. However, their legacy is kept very firmly alive by their daughter Emma and Amy Jelfs, who have been friends for over twelve years. Between them, they organise the event, with Emma managing the land and camp along with the living history and re-enactment group side of things event. Amy organises the vehicles and the show, including trade stands. Emma’s sister, Wendy, helps with the catering by arranging for the NAAFI to provide refreshments, making it a family affair.

The vehicles owned by Bob James now form the collection named after him, include several types, such as a Jeep, Diamond T Wrecker, an amphibious DUKW, half-track and other trucks, and these are put on display in his memory and that of his wife. Having two young women as organisers of an event, which is dominated by men, is an unusual combination and together they have shown themselves to be a winning team, because something which is usually seen as having men in charge does not mean the ladies can’t have a go and do just as well. Here, in the case of Emma and Amy, they prove it can be done and good for them.

During my visit to this year’s show I asked Amy if we could have a chat about the show and how she came to be involved. She explained that she was a member of a reenactment group depicting WWII and things developed from there. Even before that, she had already met Bob and Shirley through their mutual interest of collecting militaria. As time went on, she met Emma and Wendy and the friendship grew. Amy joined the local Worcestershire branch of the Military Vehicle Trust and became a member of the Ashdown Military Club. From that point on she was hooked and joined the team of helpers organising the event. Bob James recognised how valuable an asset Amy was to the team and he invited her to become a co-organiser and then finally asked her to take over.

For any military enthusiast, it would have been an opportunity too good to miss. As we spoke, Amy’s passion for the show and her attention to detail came through. Her friendly character is strong with natural leadership qualities and the ability to problem solve in an instant. Unfortunately, Emma could not join our conversation due to commitments on-site, but Amy was able to fill in the gaps.

The site at Ashdown Farm is still a working establishment and Emma and her sister Wendy grew up surrounded by military vehicles and other people who shared her parents’ interest in military history. Ten years on, and as Amy said, they; ‘Never imagined it would grow this big’. Part of the farm is given over to the establishment of the Ashdown Military Club, which preserves wartime buildings such as Nissen huts. When such buildings are in danger of being demolished and likely to be lost forever due to modern development, they are dismantled and transported to Ashdown, where they are re-erected.

Today, there are several buildings on site, each of which is used to house an exhibition. For example, one contains a display of de-activated weapons including rifles, machine guns and pistols. Another has a Home Front display and others are used for temporary displays by enthusiasts, who exhibit their collections during the Wartime in the Vale Show. One of the most recent buildings to be saved, is a wartime wooden barrack hut preserved by the Glousters Regiment group, who have kitted it out as it would have been during the war, complete with iron-frame beds. The group sleeps in here during the event.

The Wartime in the Vale Show takes a year to organise and is the only public event held on the site. Re-enactment groups can hire the site for private use over a weekend, to use it for training purposes and to drive vehicles in the arena, which is used for the show. One of the Nissen huts has bunk beds for sleeping accommodation and eating arrangements can be organised, making it a very cosy experience. Being self-contained, as it is, these weekends can be conducted without interference. The site has also been used as location for filming television productions and movies, because of the authentic buildings on-site.

Many people tend to take things for granted when visiting re-enactment events and military vehicles shows, such as the weekend organised at the site at Ashdown. Those of us who know different are aware of all the hard work and dedication which goes into getting everything right. Re-enactment groups must be positioned in the right spot, vehicles parked so that they can manoeuvre safely and drive into the arena for mobility displays. Pyrotechnic displays, catering, health and safety, toilets, traders and a range of other displays. The list is endless and Emma and Amy know how lucky they are to have a team of supporters who can be trusted to get things done.

Up close and personal

This year’s wartime in the Vale included almost 40 re-enactment groups and other displays, over 500 vehicles and an excellent range of traders. A non-stop programme of displays in the arena provided entertainment and there was also plenty to see around the site in the Nissen huts. This is a friendly and informal show where you can get up close and personal to re-enactment groups and the vehicle owners are on hand to talk about their pride and joy.

The girls are full of energy and together they are continuing a legacy in the tradition of Emma’s late parents. What they are doing is commendable and shows real spirit and dedication. Already they have announced the date for next year’s show which as 16 and 17th June 2018. My thanks to the girls for taking the time to talk with me and long may they continue to produce this superb show. For further information about the site, such as hiring the facilities for a re-enactment group weekend, full details can be found at the website: www.ashdowncamp.com.