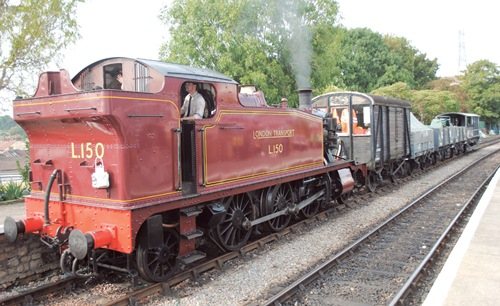 Britain today is criss-crossed with a railway network which, whilst busy, is a reduced percentage of what it once was. The country has long-been fascinated by railways and steam trains in particular. There are train spotters and model railway enthusiasts organising shows and societies covering anything connected with railways. Even re-enactment events are now being organised by a number of the restored and preserved vintage railway lines which operate a service using steam trains.

Some of the preserved lines are very well-known, such as the Watercress Line in Hampshire and the Bluebell Railway which operates along 11 miles of track between East and West Sussex. Other railways are not so famous and are very much smaller, such as the East Somerset Railway near Shepton Mallet. However, all evoke history and many now organise their own re-enactment events of the 1940s when railways were at their height of operation and a few also organise earlier periods for re-enactment weekends.

Railways are versatile venues and allow groups depicting the Victorian period and both world wars to really immerse themselves in events and visitors to mingle to gain a real sense of being part of the event. This is only made possible due to the hard work and dedication of enthusiasts, many of whom are volunteers. The length of tracks used by these vintage railways varies from only three miles for the Avon Valley Railway to some 16 miles operated by the Severn Valley Railway (www.svr.co.uk), and offer great fun for all ages. In fact, the SVR is hosting two 1940s weekend events in 2015 on 27th - 28th June and 4th - 5th July.

There will be a number of static displays, vehicles, entertainment and traders’ stalls. The military and the railway

Since covering re-enactments I have been privileged to be invited to a number of railway events and I have always found them interesting and well-attended. For example, during 2014 I was invited along to several events themed with railways and I found each was different. For example, the event organised by the East Somerset Railway (www.eastsomersetrailway.com) was called ‘The Way We Were’ and had Home Front and period entertainment at its core.

The event at the Swindon and Cricklade Railway in Wiltshire (www.cricklade-railway. co.uk) was a much broader affair, with vehicles, traders’ stands and static displays.

During the war railways were vital to the country’s operation and posters were displayed which asked the question ‘Is Your Journey Really Necessary?’ Some stations served as major logistics depots during the war, such as Norton Fitzwarren on the West Somerset Railway Line (www.westsomersetrailway.co.uk) which was used by the RASC and later the US Army who designated it Army Depot G50.

On 4th November 1940 a collision at the station left 27 dead and 56 injured. Today the stretch of line is incorporated into Graham Adlam’s Battle of Britain event to add an extra dimension of the period from the 1940s with the steam trains.

Many railway stations have been modernised and all trace of their wartime history has been glossed over, which is a great pity. Indeed, looking at Waterloo Station now you would never believe that it was targeted by German bombers and badly damaged. Thousands of children evacuated from London to avoid the bombing left from Waterloo and troops used it extensively.

Fortunately, some of the stations have been preserved, with a number categorised as Listed Buildings, and re-enactors revive times gone by staging events at the premises.

The Mid-Hants Railway (www.watercressline. co.uk) better known as the Watercress Line hosts two 1940s weekends each year. The first event is in the summer and is a general 1940s weekend, with displays at each of the stations along its 10 mile stretch of track, including bomb disposal, vehicles and Home Front. The second event is called the ‘Christmas Leave Train’, themed as an Allied and Home Front event, and is held each year on Boxing Day. Despite the date it is well-attended and attracts many re-enactors in uniform and civilian attire. The buffet car is a step back in time complete with gas mantles for lighting and period entertainment.

On the North Yorkshire Moors Railway (www. nymr.co.uk) which operates from Pickering to Whitby on the coast, the WWII event attracts re-enactors from all across the country.

Referred to simply as ‘Pickering’, the whole of the town participates, including pubs which feature period entertainment, and vehicle convoys drive through the streets of the town. Apart from Pickering there are three main stations where displays are organised. In 2013 I visited the Pickering event and was extremely impressed with the display at Levisham station where the German groups put on their displays. The station was themed as a French railway platform renamed ‘Le Visham’ under German occupation. Troops asked for travel permits and identity cards were requested, which was all taken in good part.

The ticket office at Le Visham had French signs and a local Resistance movement kept the Germans on the alert. My wife Elizabeth was asked for her pass, which was in order, but a friend of ours was ‘arrested’ and marched away. She took the experience well and went along with the guards who quickly released her. The Germans and some of the local railway enthusiasts had even recreated an armoured train, complete with gun ports, and a turret armed with a gun which fired pyrotechnics for effect. Not, perhaps, exactly the film ‘The Train’ from 1964 starring Burt Lancaster, but it was all great stuff.

Most of our images of steam trains today come from classic films such as the 1944 ‘The Way Ahead’ starring David Niven, and Brief Encounter of 1945 starring Trevor Howard. There are, of course, a number of other films featuring trains, but these two really stand out among the greats.

Many of the preserved heritage lines are of ‘standard’ gauge track, that is to say four feet eight and a half inches wide, all of which operate some kind of service using steam locomotives. The Avon Valley Railway (www.avonvalleyrailway.org) holds an annual 1940s weekend every September and boasts two wartime locomotives in its rolling stock. One locomotive, No WD70031 called ‘Grumpy’, was built for the War Department in 1941 and actually saw service during the Normandy landings. The other wartime locomotive, No 15 ‘Earl David’, was built in 1943 for the Ministry of Supply and helps in recreating the period during the 1940s weekend.

Railways and the Home Front

The Avon Valley Railway event is supported by a ‘park and ride’ from the car park using vintage buses and passengers alight wearing civilian dress or uniform. In fact, train travel allows re-enactors to depict a wide-range of recreations from civilian to armed forces and even emergency services.

Firemen, Civil Defence and nurses can often be seen in seats as must have happened during the war. Ticket collectors walk the length of the carriages asking for tickets and police ask for identity cards. In fact, some railway lines issue replica wartime identity cards as tickets for 1940s events, which is a nice touch. Spivs trying to sell ‘black market’ goods from small cases can sometimes be spotted lurking on the trains or platforms, much to the amusement of passengers, and the police trying to catch them in the act adds to the experience.

On the platforms, troops in all manner of Allied uniforms are encountered including sailors and airmen, Polish troops, French and, of course, Americans. Spies were a constant threat to national security during the war and at a couple of railway events re-enactors have turned up with wireless sets concealed in suitcases. Police were alert to the fact there were spies about and when arrested the display is interactive and lively, but always taken in good part. Even civilians just standing about looking very smart, as though waiting for a train, adds to the atmosphere and really brings things to life. The younger re-enactors can take part as evacuees, which is all authentic.

A few railway lines do organise a small battle re-enactment with blank firing and pyrotechnics and at other locations the groups arrange demonstrations including foot patrols to check for any signs of sabotage by enemy agents.