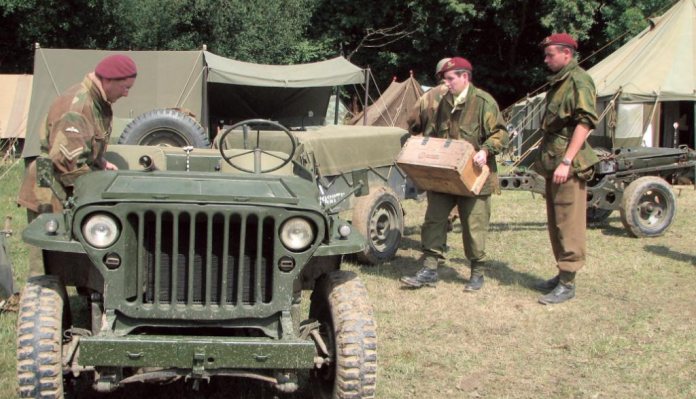 On the 17th of September 1944, 113 days after the initial landings of Operation Overlord in Normandy, the Allies launched another offensive, aimed at breaking through the German positions. Codenamed Operation Market Garden, it was General Montgomery’s latest plan, which was believed would end the war by December 1944.

What happened over nine days in September 1944 remains the largest and most ambitious airborne operation in history. Some 20,000 men were dropped by parachute, with a further 16,000 flown in by glider. They were supported by gliders and C-47 ‘Dakotas’ flying in the supplies and vehicles for the men to complete their mission. The outcome is well-known, from films such as ‘A Bridge Too Far’ and the many documentaries and books. The operation has also become the basis for some of the finest re-enactment displays and battle re-enactment scenarios.

There are many groups which depict part of the operation from various angles, including German and Polish, as well as British and American. One of the finest groups to specialise in the Arnhem operation is ‘Just Ordinary Men’ (justordinarymen.org.uk) which portrays the 1st Airborne Division Reconnaissance Squadron. They also have other aspects which can depicted and an incredible collection of equipment.

This year marks the 75th anniversary of that historic undertaking and is an opportunity for re-enactment groups to present some displays to commemorate the operation. Over the years, I have seen many reenactment depictions of Arnhem. Each one is a tribute to the brave men who took part in the operation and these displays comprising of uniforms, kit, weapons, vehicles and group members who can answer questions, are like outdoor museum exhibitions. Market Garden involved several factors, apart from the obvious British, American and German involvement, such as the Polish 1st Parachute Brigade, XXX Corps, which was to make the link-up and, of course, the Dutch people living along the route taken by the fighting.

From the beginning, the Germans had the advantage, by having the heavier forces in the area. Despite warnings, the operation went ahead and what happened over those nine days in September has entered the pages of history as one of the most heroic operations. The Germans developed the greatest respect for the British 1st Airborne during the fighting around Arnhem.

Some of the most iconic photographs of the war came out of the operation. For example, the image of Private Ron Tierney of the 1st Battalion Border Regiment with a 3-inch mortar. At an event, it did not take long for a group to recreate a similar scenario, even without an original photograph as reference, so famous is the image. When set up, the atmosphere felt authentic and the reaction of the group was excellent. Patrols are sent out through the woods using tactics of the time and sometimes there is an exchange of fire between them and the German patrols, which must have happened for real.

The German side of things is represented by various groups and during battle reenactment scenarios they can use their replica armoured vehicles, such as StuG III, tanks and armoured cars. In 2014, the Tank Museum in Dorset, built a reduced scale replica model of the bridge at Arnhem with its distinctive arched framework, which set the scene for the arena display at that year’s Tankfest. Deploying the Tiger tank, along with half-tracks, it was an exciting and realistic-looking scenario. At other events, different aspects of the operation, such as Sergeant John Baskeyfield of the South Staffordshire Regiment, who won a posthumous Victoria Cross for his actions with a 6-Pounder anti-tank gun, can be included in the battle re-enactment.

No Operation Market Garden scenario would be complete without depictions of the American 82nd and 101st Airborne Divisions. They make an important contribution to Arnhem re-enactment displays with weapons and vehicles. They re-enact the fighting around the towns of Nijmegen and Eindhoven, where civilians were caught up in the middle. For this, they build backdrop scenarios, such as houses, which give the impression of having been destroyed in the fighting. The members of the groups take their positions in windows and behind other objects, such as walls. Armed with rifles and machine guns, they convey the historical significance, like a living history museum. Even sitting in trenches or behind a log, the effect is realistic and shows the conditions. Small points of detail, such as marker panels laid out to receive supply drops, all add to making the display realistic.

Some re-enactors go a stage further and undergo actual parachute training to prepare for a jump from a historic C-47 Dakota. This is surely the ultimate expression in re-enactment and for those who do it, the experience must be exhilarating. Such is the contrast of Operation Market Garden, that so many aspects can be re-enacted, including the supply drops and the medical support. When it was decided that the operation should be ‘closed down’, the evacuation order was issued for the surviving British troops trapped at Arnhem to escape from Oosterbeek. On the 25th of September, it was all over and of the more than 10,000 men of 1st British Airborne Division only some 2300 managed to get back to the Allied lines.

Whilst it was claimed that the operation achieved partial success, it was ultimately a failure, because the mission was not completed. Despite this, it remains an expression of the fighting prowess of ‘Just Ordinary Men’ and for the veterans who are left this 75th anniversary year is their moment. Their actions were inspirational and the re-enactors who recreate that spirit are part of that legacy to continue remembering. Arnhem is also of interest to collectors who want to own some item of historical value, which is connected to the operation. This can be a weapon, personal artefact or item of uniform, it is the historical significance attached to it. Battlefield tours along the whole route of the operation are also popular, with the families of some of the men who took part visiting where relatives fought. With so much interest, Arnhem will never be forgotten.