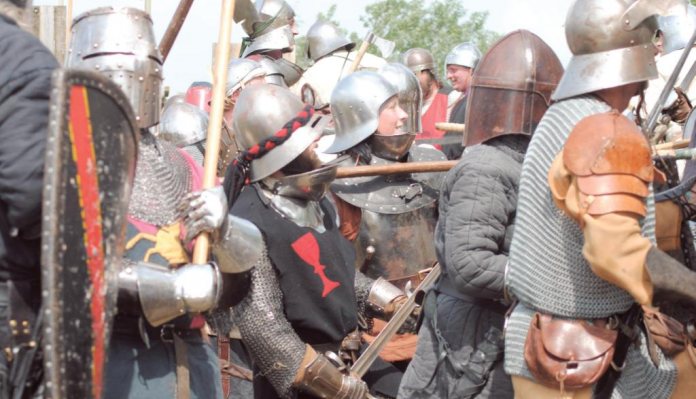 The pastime of re-enactment can produce very strange effects on people visiting events. Suddenly, these otherwise ordinary people, can become smitten with a strange urge to enlist with a group, to join what is arguably the most enjoyable full contact pastime. They are now on the verge of entering the world of re-enactment. Even those who are visiting a re-enactment event for the first time, never having given a thought of becoming a re-enactor, can find themselves drawn into the realm of recreating historical periods. This urge can take hold of anyone including doctors, police officers, carpenters and plumbers, students and even retirees.

Re-enactment is another form of thrill fulfilment; in the same way some people derive from skiing or bungee jumping. For some people, this desire to do something different may not manifest itself immediately, but when it strikes, something must be done. When it happens in the case of re-enactment, the best thing to do is talk to experienced re-enactors at an event. This may be at a 1940s weekend, or an event where earlier periods are being depicted. Re-enactors love talking about their pastime, especially to a potential recruit to their ranks, and the advice rendered will provide guidance on the period which most interests and advise on the role they are seeking within a group.

To find the right period may take a couple of visits to a group, or several groups, to see which period or unit being depicted is right for you and, conversely, are you the right person for it. Indeed, many groups positively encourage this ‘testing’ time, to see how things work out. In some respects, it’s rather like buying a pair of new shoes. Get it wrong and it’s all been a waste of time, effort and money; so, it’s best to try before going out to buy all the equipment and uniform.

Re-enactors like to help a recruit as much as they can before they make a full commitment and that is where talking helps. To help at this stage, many groups will loan a potential re-enactor some kit, to allow them to participate in a couple of weekend events to get a ‘feel’ for things. If all goes well and your mind is set, then proceed to the next stage and you join the group. Each group can be viewed as an exclusive club and the members take great pride in the history they are preserving and the memory of those who created it.

When it comes to recreating periods of military history, potential recruits wishing to join a re-enactment group can find themselves truly spoilt for choice. With over 3000-years of recorded history, the prospect of making the right choice can be daunting. However, if someone is particularly drawn towards a period, the choice is easier. This could be the English Civil War, Napoleonic Wars, Romans or either of the World Wars. With the period of history out of the way, the next step is to choose which side to represent. Is it to be Parliamentarian or Royalist; Yorkist or Lancastrian; French or British; Union or Confederate?

Some re-enactors can end up joining three or four groups to depict various periods. Indeed, I have been greeted by re-enactors at events where they are depicting a Royalist musketeer and only the week previously I saw them as WWII British Airborne. This is a huge contrast, but this is re-enactment and such things are normal in this pastime. Likewise, a re-enactor can depict a foot soldier in one period and be a mounted trooper in another. This is diversity at its best and is an option which allows a re-enactor to have a rest from one period, whilst continuing with the pastime.

Obviously, such a choice is down to the individual and does not suit everybody. Largely speaking, though, most re-enactors prefer to stay with one period, which keeps things orderly. Re-enacting WWII is a popular, mainstream subject allowing re-enactors to explore many aspects of history. This period has many countries which can be depicted and there are so many units to portray, from artillery to armoured elements, and even airborne. For example, the 101st Airborne Division is always popular and even allows vehicles to be used to full effect.

The same kind of choice faces potential re-enactors in whatever period they are interested, including Napoleonic Wars, English Civil War or American Civil War. These periods each have nationwide and, in some case also international, membership stretching as far afield as Australia and Eastern Europe. Then, there are the periods which are not so well known, including Greek Hoplites and Ancient Egyptian. Many people only come to realise such lesser-recognised groups exist when they see them for the first time at multi-period events such as Military Odyssey. To find out more about the UK-based Greek Hoplite Association visit the website at: www.hoplites.org.

Female of the species

Depictions of these very early periods are popular with female re-enactors, because they offer an opportunity to engage in displays of lifestyles, showing fashion and social etiquette. There is also the added excitement of joining a female archer group, which research proves did exist. This role allows female re-enactors to participate in historically-correct displays and engage in battle re-enactments. Groups depicting cavalry, from Roman to Napoleonic and even WWII, such as Russian Cossacks, attract many female riders, who enjoy the opportunity to combine their love of horses with re-enactment.

The pastime of re-enactment is an equal-opportunity pastime, with male and female re-enactors often seen together on the field of battle re-enactment standing in line as musketeers, pike blocks, cavalry and artillery. The pages of history are full of examples of where ladies have joined the army for various reasons and served as men. So, when ladies are seen engaged in a display, they have chosen to take a side and are portraying fact from Napoleonic Wars, such as Mary Anne Talbot, to the Russian Army of WWII with female snipers such as Rosa Shanina, who had at least 59 confirmed kills.

Once a re-enactor recruit has decided on the period which is right for them and chosen sides, experience begins to build with each event attended. More research expands on this and more roles within a group can be developed. For example, cooking for the group can be undertaken by either male or female re-enactors and some individuals may choose to develop a specialist role, such as dog handler or medic. Some female re-enactors choose to become drummers in groups depicting the English Civil War and very good they are, too.

The internet has become an extremely important tool for potential re-enactors; visiting the various websites and watching film clips of events on specialist sites such as ‘YouTube’. All the periods and various groups are listed, and if you cannot find the website, there is always Facebook, which has become a social media phenomenon. Photographs can be ‘posted’ on Instagram for immediate viewing by a mass audience. There are the traditionalists, though, who prefer the old-fashioned way of doing things and visit events, where they can talk direct to experienced re-enactors.

There is much to be said for both methods of deciding which period to depict and choosing the right group to join. One very important website, which is a must see for anybody considering becoming a re-enactor or setting up a group, is the National Association of Re-enactment Societies (NARES) which has pages offering great advice from insurance to weapons. This can be found at: www.nares.org.uk.

Re-enactment is unique among pastimes because whole families, regardless of age differences, can become involved in it. There are some groups where three generations in the same family actively participate in events. Some families may have members in different groups depicting different periods of history. It all comes down to personal choice. If at some later stage a re-enactor decides on a change, then they can move to something else. The main thing is to enjoy doing whatever you choose in the exciting pastime of re-enactment.