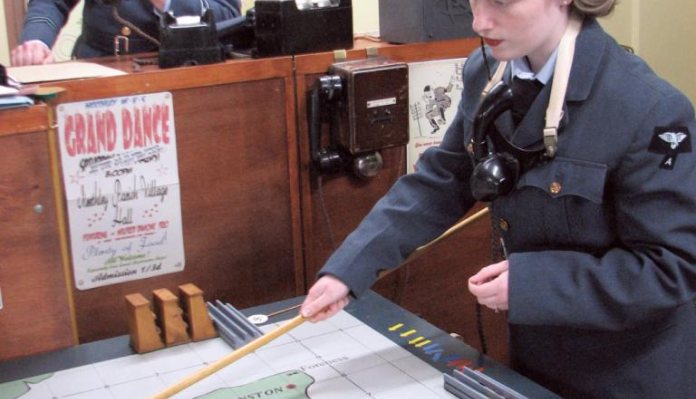 When the Second World War began in 1939, the Royal Air Force was just celebrating it 21st year since its foundation as the world’s first independent air force. In that time, things had changed out of all proportion, with faster aircraft, armed with more powerful weaponry. By the summer of 1940, the RAF was bracing itself to face the greatest challenge any air force of the day could have ever imagined, as the pilots prepared to take on the might of the German Luftwaffe, in what would become known as the Battle of Britain.

It was during that period that Winston Churchill, the Prime Minister of Great Britain, made his memorable speech in which he praised the pilots of the RAF by saying: ‘Never in the field of human conflict has so much been owed by so many to so few…’. Indeed, the fighter pilots afterwards became known as ‘The Few’ and it is to their memory that the historical re-enactment WWII RAF Group dedicate their depiction of an Operations Room of Fighter Command.

I have seen various such depictions, but it is the recreation of the operations room shown by the WWII RAF Group, which really comes the closest to showing how things would have looked. It was back in April at the Gloucestershire and Warwickshire Steam Railway 1940s Weekend that I finally got to meet with them properly and find out more about them. The group has been established for around twelve years with some 14 regular members and a handful more turning up as ‘backup’, to provide more helping hands. It is an evenly split membership between male and females and it is this mix which allows them to present a realistic impression

Talking to Ron Evans of the group, he explained that many of the members have family connections with the RAF, which makes it that more personal when it comes to presenting a display. Ron went on to say that at some events, such as the railway weekend, they depict an ‘emergency operations room’, which is something that would have been used if the main control centre on the airfield was destroyed.

This information made me think of that classic 1953 film ‘Angels One Five’, starring Jack Hawkins and John Gregson. Sharing this thought with Ron, he replied by saying that the film had inspired the group to create the display. During the demonstrations, an explanatory commentary informs visitors as to what is happening and why certain things are happening. These are based on actual events, using the references to provide realism to the commands directing aircraft to engage German aircraft. Such presentations require a lot of imagination and the watching crowds listen attentively to the dialogue.

A range of equipment from telephones to plotting tables set the scene, along with maps and mechanical calculators. The ladies of the group wear Women’s Auxiliary Air Force (WAAF) uniforms with trade badges and rank on the sleeves. It is they who move the symbols around the plotting table, and wearing headsets just as in the war, they complete the setting. The male officers answer telephone calls and issue orders, to which the plotters must respond to by moving symbols on the table. During the war, these ladies could complete multiple calculations in their head each minute.

The WWII RAF group have been fortunate to obtain wartime telephone sets and other items, including a very rare mechanical calculator which required some attention. The microphones and headsets came from various sources and are of the period. The uniforms worn by the group are post-war style and being of a similar pattern, serve the purpose. Helmets are wartime and other items of kit and equipment from the period add authenticity. The plotting table had to be built by the group and with no template to guide them, they had to use photographs and visits to RAF museums as reference.

The emergency operations room is just one of the displays that the WWII RAF Group can present at an event. Among their other displays, is an ‘Ops Room’, briefing to pilots of Bomber Command prior to going on the mission. This includes flight briefing, target, and timings along with the size of force, just as it would have been. They also participate in outdoor displays, such as dispersal, with a complete ‘Scramble’ to waiting aircraft. For full details of what the group can provide in the way of displays at events, it is best to visit the website at: www.ww2rafgroup.org.

The RAF began flying sorties (missions) on 3rd September 1939, the first day of the war, and continued operations until the end of the war. The RAF expanded greatly to meet war demands with the WAAF peaking at a strength of almost 182,000 in mid- 1943. The casualty rate among the air crew was enormous, with over 70,000 killed, almost 23,000 wounded and more than 13,000 taken prisoner. Even ground crew suffered heavy casualties, with over 9500 killed and almost 4500 taken prisoner.

It is the displays put on by historical re-enactment groups, such as the WWII RAF Group, which serves to remind people of the history of the RAF and its vital role during the war. The numbers involved surprise people when they hear facts such as those above. If they have watched the 1969 film ‘Battle of Britain’, starring Michael Caine and Laurence Olivier, to them it is like seeing this film in real time, but only better quality. This is true attention to detail, with historical accuracy and because of that people enjoy all the better. Depicting the RAF has come a long way too, but don’t just take my word for it, look at the numbers watching these fascinating displays.

If you should think this is the kind of group for you to join, the WWII RAF Group would be pleased to hear from you through its Website. Depicting the RAF is attracting more interest and groups are expanding memberships and the size of their displays. With replica aircraft on site at some events, it is very easy to become a greater part of a static display at a show. Sometimes, vehicles such as staff cars are parked in the display area. which, along with tents, will always attract attention.