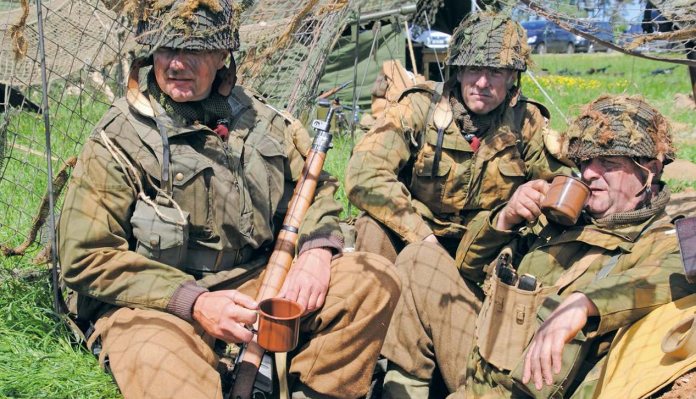 It is now more than two years since the COVID-19 pandemic outbreak, which affected so many aspects of our daily lives. As we return to normality, we can think back to the periods of isolation, called ‘Lockdowns’, which were introduced to stop the spread of the infection. This move left us with more time on our hands than we could ever imagine. People dealt with this enforced shut-down in different ways, but mostly they used this time imaginatively. One such person who used this time constructively was Andy Bryant, who I met recently at the ‘WARAG’ event, a re-enactment and military vehicle show held on the site of the former wartime Middlezoy Aerodrome, near Westonzoyland in Somerset.

Andy explained how he had long had an interest in the airborne forces of WWII, collecting equipment and weapons as part of his re-enactment to depict the 506th PIR of the 101st Airborne Division. When the first lockdown was introduced in 2020, he decided to fill his time by fulfilling his aim of creating a unit to depict the British 6th Airborne Division during the Normandy landings. Depictions of British airborne units often overlook the role of the Parachute Regiment during the Normandy campaign in favour of ‘Operation Market Garden’ at Arnhem. The new group would restore the balance.

Continuing his research, collecting items from online traders and keeping in touch with a couple of long-standing friends who were interested in his project, they made their preparations in readiness to launch their new group. Finally, in 2021 their patience was rewarded as COVID restrictions began to ease and they could, at last, attend their premier event. The group was small but well-equipped and looking forward to meeting the public.

Calling themselves ‘Ham and Jam’, they were an instant success and since then they have attended several shows with bookings already in place for the months ahead. At Middlezoy, all three friends were in attendance and it was an opportunity to see their collection on display and find out a bit more about the group.

Firstly, for the benefit of those who may not know the significance behind the unusual name of ‘Ham and Jam’, on the night of 5/6 June 1944, six gliders of the 6th Airlanding Brigade of 6th Airborne Division, with a total of 180 men from D Company of 2nd Oxfordshire and Buckinghamshire Light Infantry, were commanded by Major John Howard. Three gliders landed at the bridge over the Caen Canal, whilst only two landed at the bridge over the Orne River at Benouville. Within fifteen minutes both bridges were captured and to signal the success of the mission the coded message ‘Ham and Jam’ was sent.

Apart from the OX & Bucks LI, Andy Bryant and his friends, Ben Hale and Steve Applegate, also depict the 9th and 7th Battalions of the 3rd and 5th Parachute Brigades respectively, which in turn attacked the gun battery at Merville and supported Major Howard in turn.

Steve also extends his depiction by sometimes turning out to show No 4 Commando Royal Marines, which was part of 1st Special Service Brigade. It sounds like a lot for such a small group to depict, but they have already proved they can do it from the shows they have attended. They have the right kit, equipment and weaponry to put on displays and the knowledge to talk about the units of the 6th Airborne and the other operations in which they were engaged.

Putting the whole lot together took about a year, including research, exchanging lots of emails and endless telephone calls. The three have like-minded interests, being militaria collectors and enthusiastic re-enactors with plenty of experience. Because of the unit they are portraying, there is a lot of room for flexibility in choice of displays. For example, in the action at the Benouville bridges, they can portray glider-borne troops of the Ox & Bucks Light Infantry and then swap cap badges to portray a battalion of the Parachute Regiment at either the Merville Battery or the fighting around the village of Ranville.

The kit and the display

In any of these displays, they can exhibit their combined collection of weapons and equipment, which comprises a mixture of original kit, deactivated weapons, reproduction and replicas. Documents, for example, being paper are very fragile and so facsimiles have to be used to illustrate what message forms looked like along with wartime maps. All three friends are continually adding to their collections, which expands and strengthens their displays.

At the WARAG event, they had prepared slit trenches of the type the troops dug at the bridges. By draping camouflage netting over them, they added to the effect and they were perfect for the presentation. They did reveal that a small mechanical digger did all the hard work, but they laid out things to give the impression of being prepared to fight off an attack. This included the type of weapons the airborne troops would have had on landing, such as rifles, Bren guns, 2” mortars, hand grenades, PIATs and Sten guns. Whilst none of these things are heavy, they would have allowed the troops to defend themselves against attack.

Whilst there are only three members of the group at present, that is still a sufficient number to demonstrate all of the weapons they put out on their display. They very obligingly took up positions to show members of the public how the weapons were aimed and operated. Then, in quieter moments, relaxed with a mug of tea or listened out for messages on the radio. Wearing ‘jump smocks’ and ‘Para’ helmets they looked authentic as though waiting for their relief to arrive.

The three members of Ham and Jam can answer questions about the three targets which the brigades within 6th Airborne Division were given as operational tasks to complete as part of ‘Operation Tonga’. This includes the destruction of the bridges around Troarn, the attack against the Merville battery and ‘Operation Deadstick’ to capture the two bridges at Benouville. They can explain the workings of the various weapons along with the timeline of events leading up to when Lord Lovat arrived to meet Major Howard. As collectors, they are always on the lookout for anything that is connected with what they are depicting, which includes radio sets, an example of which they had just acquired and were proudly showing off.

Ham and Jam certainly know their stuff and put the lockdown time to good use by creating a new group. They can be contacted through Facebook by typing in the name of the group, just post a message and they will respond. Nothing could be simpler and all made possible by technology. They have already shown their abilities at shows and ahead of them lay further events, where they will undoubtedly attract a lot of attention. The show of WARAG itself is still a relatively new event but growing in size and reputation, details of which can be found at www.wrag.co.uk