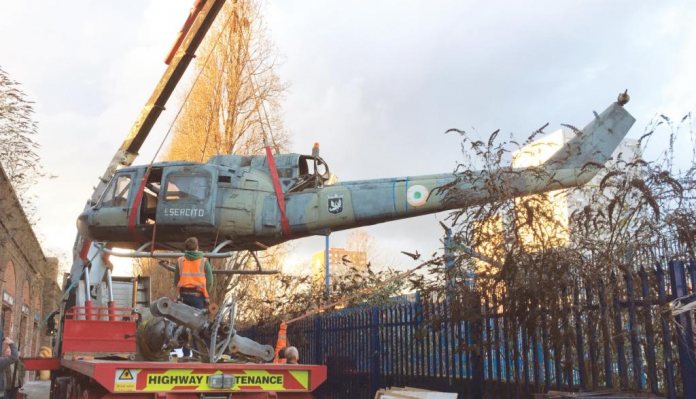 Re-enactment is a flexible hobby that allows participating individual re-enactors or groups the opportunity to explore and develop periods of history which holds a special interest for them.

This flexibility has led to the creation of groups depicting Romans to French Resistance in WWII. Whatever period or subject is chosen by a group to portray, it is important to expand and develop in order to remain interesting. This takes imagination, which many re-enactment groups have in abundance, as demonstrated by Stuart Beeney of MAG36-UK, who contacted me recently to tell me of an incredible project on which the group is working.

The MAG36-UK is sub group of Rolling Thunder (rolling-thunder.org.uk), a group which portrays the Vietnam War and can trace its own origins back to 2001. In late 2016, Stuart heard that a Huey helicopter was being offered for sale by the London Motor Museum, which was closing. This news was an opportunity too good to miss, because If there was one thing a Vietnam War re-enactment group needs to stand out from the rest, it is a Huey helicopter, now regarded as one of the iconic symbols of the war.

A visit to the museum was arranged, in order to see the condition of the helicopter. Stuart made phone calls to a few friends, during which conversations, as he explained, he asked them: “Do you want to buy a Huey?” The response was usually ‘stunned silence’, but, once they knew he was serious, they agreed with the idea. Several months later, in January 2017, the acquisition made, the MAG36-UK group the proud owner of what is believed to be the only static Huey helicopter in private ownership in the country. That was just the beginning, because, as the group discovered, ‘buyer collects’! Fortunately, with great support from Michael Whiteley, Stuart and the rest of the group, they managed to move helicopter to a temporary location in east London, where restoration could begin.

The UH-1 Iroquois, nicknamed ‘Huey’, was developed by Bell Helicopter to meet a requirement set by the US Army in 1952 for a utility helicopter. It first flew in 1956 and by 1987, when production ended, more than 16,000 had been built. During that time, the Huey entered service with various countries including Australia, along with Japan and Italy, which were granted permits to build the helicopter under licence. It was during the Vietnam War that it came to public prominence. It was also this war which gave the Huey its first combat service and showed its versatility as a utility helicopter by operating in the medical evacuation role, as well as proving itself as a supply helicopter, gun platform ‘gun-ship’ to provide fire support, as well as flying thousands of troops. In all, some 7000 Hueys would be used in the war.

The version Stuart and his fellow re-enactors acquired was built in 1964 and is an AB-204B, manufactured under licence by the Italian company Agusta for the Aeronautica Militare Italiana, (Italian Air Force), entering service in 1976, transferring to 31 Stormo the following year, before going to Scuola Volo Elicotteri (SVE), Frosinone. In 1982, it went to Scuola Volo Basico Avanzato Aviogetti (SVBAA), Foggia Amendol and finally in 2007 it was displayed at the Museo delle Telecomunicazioni, Milan-Cormano, where the ESERCITO (ARMY) markings were applied. In 2014, it was acquired by the London Motor Museum, from where it was sold to the MAG36-UK group. The rest, as they say, is history.

Imbued with an enthusiasm which can strike dedicated re-enactors who, when presented with such a rare opportunity, set about restoring their new acquisition with vigour. The small group of friends who make up MAG36-UK have been involved in depicting Vietnam Living History for many years, knew how important the finished result would be. Because they all had an interest in the United States Marine Corps, with one of MAG36-UK having contact with several Marine Veterans, it was decided to restore the Huey as ‘BIRD 18’ from VMO-6, a US Marine Corps Observation Squadron, which saw extensive action on Okinawa during WW2; later, the unit went on to serve during both the Korean and Vietnam Wars. It was agreed that a Marine Corps ‘Bird’ would be more fitting, because they are underrepresented compared to Army Aircraft.

The real United States Marine Corps VMO-6 was part of the MAG-36, receiving its first Huey in August of 1965, less than a month before being shipped out to Vietnam on board the USS Precinct. Arriving in Vietnam, the unit was given training by the US Army while their helicopters were converted to gunship role. Operating from bases in Chu Lai, most of the missions flown by VMO-6 was to provide close air support to infantry and acts as reconnaissance units. It was in these roles that the unit took part in operations such as Double Eagle and Blue Marlin. It was whilst providing support to Marines on Hill 488 on 15th June 1966 that their new squadron commanding officer, Major William J. Goodsell, was killed in action when his helicopter was shot down.

During one operation, Captain Stephen W. Pless flew his helicopter in to rescue four soldiers who were under fire and about to be overrun. Now heavily overweight, Captain Pless flew low over the water as he tried to gain lift to get airborne. For their part in the action, each of the three men in his heroism were awarded the Navy Cross, whilst Captain Pless was awarded the Medal of Honor. In October 1967, the squadron moved to Phu Bai, and a month later to Quang Tri, where it continued to fly missions in support of operations such as Apache Snow and Purple Martin. It also flew in support of the valiant defence at Khe Sanh. Two years after the end of the Vietnam, VMO-6 was deactivated on 1st January 1977.

With such a dramatic history, no wonder Stuart Beeney and the other members of the MAG36-UK group decided to portray the original unit, which served throughout the Vietnam War with such distinction. Over the last two years, the group has forged strong links with many veterans who fully support the project, as well as giving advice and answering questions. The veterans have also provided original photographs for reference and to illustrate the history of the wartime service of the unit.

The project is approaching the end of the first phase of its restoration, which has been achieved using parts sourced though the group’s network of suppliers, to reach the point where the Huey, nicknamed ‘BIRD 18’, in honour of the original helicopter from VMO-6, now resembles what is termed a basic ‘Slick’. The next stage is to turn it into a true VMO-6 GunBird, complete with six M60 machine guns and two seven shot 2.75-inch Mighty Mouse rocket pods. The mix of weaponry was not standard configuration but rather ‘designed in house,’ or converted in the field, and known as a TK2 set up (Temporary Kit 2).

For example, the rocket pods and M60s were fitted to fixed mountings, meaning that the helicopter as the weapon platform had to be aimed at the target, as opposed to aiming the weapons, as possible with army helicopters. Fortunately, the MAG36-UK group is in contact with many veterans from VMO-6, including the man who originally came up with the design for the TK2 set up, which will greatly aid the project.

It has been hard work to reach this stage, and there is still a long way to go with the project, but they are confident they will get there. Already the group has plans to display the Huey at two major re-enactment shows this year, beginning with War and Peace Revival at the Hop Farm in Kent (warandpeacervival.com) over five days between 24 and 27 July. The second event will be Military Odyssey (military-odyssey.com) at Detling in Kent over the Bank Holiday weekend of 24-26 August. So, be sure to swing by and see the display. For those who would like to know more about the restoration project, everything can be seen at: mag36-uk.org.