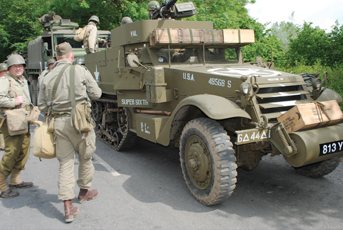 Hitler was very serious about invading England in August 1940 following the collapse of France and the evacuation of Dunkirk. One only has to look at maps and documents to realise his plans were ambitious. Codenamed Operation Sea Lion it would require 260,000 men, 62,000 horses and 34,000 vehicles. The main bulk of the invasion would have come from the area around Calais with other assaults being launched from Le Havre and the Sixth Army under General Field Marshal Walther von Reichenau attacking from Cherbourg. His landings would have been made in Lyme Bay between Weymouth and Lyme Regis with an axis of advance heading for Bristol. This would have placed the tiny Dorset village of Maiden Newton slap bang in the front line of fighting.

Fortunately Hitler cancelled Sea Lion, so the attack never came and the village was saved.

Two years later the area was invaded… but this was the so-called ‘Friendly invasion’ as American troops arrived as Britain’s ally, bringing with them trucks, tanks, artillery and all the hardware needed to prepare for the invasion of France. Seventy years after that event Maiden Newton plays host to a very special event to commemorate that period and every two years turns the clock back as once more trucks, tanks and motorcycles arrive from all over the country. This biennial event is called ‘Maiden Newton at War’ and reminds everybody involved of what nearly happened, but also what actually did happen after the Americans arrived. The event was created in 2008 and this year makes it the third time it has been held.

When a Typical Dorset Village Goes To War…
The roads around that part of the country are notoriously narrow and winding as anyone who has holidayed there will know. It is difficult enough at times to drive a family car down these routes but trying it with dozens Sherman tanks, M3 half-tracks, M8 scout cars and hundreds of other wheeled vehicles and it is nightmare. Yet, out of all what appeared to be chaos emerged well-organised road runs into towns such as Dorchester and Weymouth. The village of Maiden Newton lies just off the A37 and has a population of just over 1,000 with typical amenities such as school, stores, post office and pub. Yet, when Maiden Newton goes to war with this event everybody turns out to support it.

I spoke to a vicar who was wearing an old-fashioned cassock, steel helmet and holding a period bicycle and looked as though he belonged on the set of an episode of Dad’s Army. As we talked he introduced himself as the current serving vicar of the village. He had really got into the spirit of things and he pointed out staff from the school who were wearing period dress and even the lady who runs the village store was dressed the part. School children turned out as evacuees to add to the atmosphere. Live entertainment throughout the day kept everybody in the mood. A small pub, selling beer, had been erected along with a police station and other sites such as the WVS.

The Vehicles ‘Parade’
The drivers of the line of vehicles on the road waited patiently for the signal to start engines and I had the opportunity to take some photographs of some unusual vehicles. Some I had never seen before and I had to ask the drivers exactly what they were. The M4 High Speed Tractor was one such vehicle, plus a WC 4 I had only ever seen in a book - and to see an M4 Sherman fitted with deep water wading equipment was incredible.

A whistle was blown and everything started off on the road runs to their destinations. In a bordering field, static displays had been set up showing weapons, vehicles and other equipment used in the war. It was all very informal and more usual vehicles such as the Humber Heavy Utility Car could be examined in detail. An unusual presentation I spotted was a couple of chaps patrolling as a Bren gun team with all the kit. It turned out they were depicting No 2 Commando (Army) as opposed to Royal Marine Commandoes, but they were still part of Combined Operations. The unit took part in the St Nazaire raid and other engagements and served in Italy.

The Battle
The organisers had put in a great deal of hard work to create the setting, laying out battlefield pyrotechnics and even erecting a barn. A good turnout by re-enactment groups ensured that the battle would be lively and included a number of jeeps, a half-track, Schwimmwagen and a recreated Panzer III. The setting was late in the Normandy campaign after the Allied breakouts and the Germans conducting a fighting retreat. The Second Battle Group provided the German infantry with the 1939-1945 Group providing the Allied forces.

Some light skirmishing started the battle, followed by pyrotechnics fired to simulate artillery and mortar fire, then small arms opening up. The Panzer III made its contribution before being destroyed by a British army PIAT (Projector Infantry Anti-Tank). The action moved across the field towards the barn where the troops demonstrated houseclearing techniques. It was a tough display and showed how the troops in 1944 must have had to deal with similar situations. Tactics were good and the overall co-ordination kept the pace going right until the final whistle was blown to signal the end of the battle.

‘Covert’ Filming
Having seen so many of these kinds of battle re-enactments I notice how weapons are used and they always look very good. On this occasion, though, I noticed one infantryman armed to them and other groups could perhaps follow the example. Cameras have become so small they are now unobtrusive - as proved in this case.

Dutch Marine Luchtvaartdienst (MLD)
It was whilst admiring a restored Humber Heavy Utility Car with the insignia of the 21st Army Group badge that I met Les Jackson, who I had not seen in many years. He was portraying Royal Navy and looked very smart, fit and certainly enjoying himself. As we chatted and caught up on our news he asked if I would like to meet a small group of chaps who had travelled over from Holland to take part in the event. Les took me over and introduced me to Marcel Biemolt and his friends who were dressed as naval air crew in Royal Navy uniforms, complete with parachutes and life jackets. The group explained they were depicting Dutch Marine Luchtvaartdienst (MLD) in exile after 1940 and serving with the Royal Navy and flying with Coastal Command. They have been to all three shows at Maiden Newton, such is the reputation of the event.

The MLD was formed in 1914 but as the country was neutral in WW I they took no part in the fighting. In 1940 the Dutch armed forces fought a brief but bloody action against the German invasion and after the country had surrendered the MLD evacuated to England where they were formed in squadrons and flew patrols and were in effect the Dutch equivalent to the Royal Navy’s Fleet Air Arm. These Dutch airmen were equipped by the Royal Navy, hence their uniforms and kit, and flew B25s, Hudson and Catalina aircraft and acquitted themselves very well. In the Far East their colleagues fought against the Japanese but they were vastly outnumbered. After the war the MLD returned to Indonesia which had been a pre-war Dutch colony. It turned out that I had met some of these chaps before when they were depicting Dutch infantry and used to come over bringing their bicycles with them to events at Kirby Hall and Dover Castle. What a small world it is - and it was good to meet up with them again after all this time.

This depiction shows how armed forces from countries which were occupied fought on in exile and expands the areas of re-enactment. It also shows how as re-enactors grow older they move from units involved in battle re-enactment to depicting an aspect of the war which is more in keeping with their age group.

Maiden Newton 2014
This event only happens every other year, so the next will be in 2014, which will be very poignant because it will be 70 years since troops left the area for the invasion of Normandy, many of them never to return. Some veterans and their children have formed a bond with the Maiden Newton community, which will remain strong and never be forgotten as long as events like this take place to remind us all of what happened.

My thanks go to Andy Elliott and all the other organisers and helpers who made this event such a great success. GM