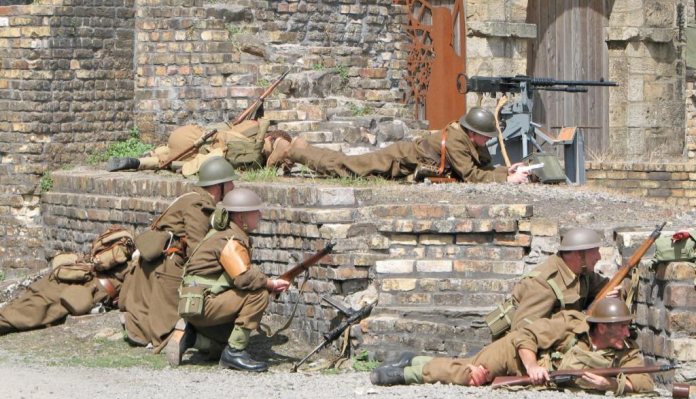 When France declared war against Germany on the 3rd of September 1939, following the German invasion of Poland, the French army mobilised some five million men, of which over 900,000 men formed the standing peacetime army. Several months later, in May 1940, the French army had a total of 119 divisions, including 63 infantry divisions. Many of the regiments forming these divisions had long and distinguished histories, some of which dated back to a time before the Napoleonic Wars, such as the 69eme Infanterie Regiment de Ligne. Originally formed on the 10th of April 1796, as the 69th demi-brigade of the infantry of the line, the regiment served mainly in Spain during the Napoleonic Wars and was present at the Battle of Waterloo in June 1815, after which it was disbanded. In 1840, it was reformed and served throughout WWI but was again disbanded in 1923. In late September 1939, the 69th Regiment was once more reformed, but this time designated as a fortress unit and sent to garrison the Faulquemont sector of the Maginot Line.

When the German army attacked in May 1940, French forces in the Haute Seille region, including the 69eme Regiment, held out for six weeks, until finally defeated. Today, this fine regiment is remembered by a small group of re-enactors, dedicated to preserving its history. Known by its historical regimental title, 69eme Infanterie Regiment de LIgne, the group portrays the period of the Napoleonic Wars and both world wars.

I met the group quite by chance during a visit to a 1940s weekend event at the Blaenavon Ironworks in Wales and, although relatively low key, it is one of several UK shows that the group attends each year. It was their appearance, as they were seated against a backdrop of a brick-built archway, which caught my attention. The image reminded me of the Fort de Dunes at Dunkirk in France, where the Allies evacuated in 1940. Although there were only three members present, between them they mounted a superb static display of French army equipment and weapons used during WWII.

Richard Delingpole, hirsute with a splendid moustache, wearing full uniform of greatcoat and ‘Adrian-style’ helmet, carrying a Berthier carbine, looked every inch a typical French ‘Poilu’ infantryman. Christopher Edwards speaks French and acts as translator when the group attends events in France. The other member was Steven Farbank, who is a collector French army militaria and acts as the group’s ‘authenticator’ when members are considering buying something.

Chris Edwards explained to me that members come from Hampshire up to the Midlands and each year attend several events in the UK. In addition, they try to fit in at least one trip to Europe. Chris told me that they are preparing for their next ‘big’ show, which will be in 2020 to commemorate the 80th anniversary ‘Operation Dynamo’; the evacuation at Dunkirk, where more than 100,000 French troops were rescued.

All present and correct

Members of the 69eme Regiment wear a mixture of original items, such as water bottles and belts, along with reproduction. The original items they pick up at shows and collectors’ fairs, where the expertise of Steven as an experienced collector, comes in to give advice. Research in reference books and records have allowed the group to piece together their uniforms. Some items are either no longer available or very fragile, which means that they must buy reproduction items. Some of the original items they have collected are in surprisingly good condition. In fact, some do not look as if they have ever been issued.

For reproduction items of webbing or uniform, there are several sources available to supply French army kit, including Soldier of Fortune (sofmilitary.co.uk) However, the group told me their preferred choice of supplier is a Chinese-based company called the Hiki Shop (hikishop.com). The company specialises in manufacturing reproduction military clothing of very high standard, which includes the ‘lesser-known’ WWII forces, such as the Finnish and Chinese armies. The company also produces the more usual range of American and German kit and, of course, French equipment. Richard and Chris showed me some of the items, which looked as though they had just been issued by the Quartermaster Stores.

The weapons carried are Berthier carbines, Colt 1911 pistols, bayonets and knives along with hand grenades. The centrepiece of their display was a reproduction Hotchkiss 8mm calibre machine gun, mounted on its tripod. The loading strips holding the ammunition, complete with carrying boxes, added to the authentic look. The machine gun was a reproduction ‘gas gun’, made by our old friend John Webster of WTAC, to produce realistic sound effects when firing.

Members make a functional use of many items of kit in their collection, such as the vintage period coffee bean grinder and pot for making fresh coffee. When ready, this is poured into each man’s cup, also of period-style and taken from his webbing equipment, to keep up the image and maintain the realism. When kit and uniform is not in use, each man folds his uniform and stacks them neatly to present a ‘mini’ display. Personal items carried in the webbing pouches are also authentic, such as soap, powder for cleaning the teeth and a range of other sundry items, which would have helped make a soldier’s life comfortable.

I have seen depictions of WWII French soldiers before in the UK, but never to the level of authenticity of that achieved by the 69eme, which looks thoroughly convincing. Recreations of the French army, especially during the period of WWII, are very unusual. However, here is a group which has immersed itself deeply into the original unit’s wartime history and they do it credit. It is a rare achievement, indeed, to have reached a standard where they look believable, to such a degree that they can participate in a historically important event on the scale as the 80th anniversary of Dunkirk, and a true mark of their commitment to re-enactment.

If anyone is interested in knowing more about the 69eme or even joining the group, they can be contacted through the website which can be found at 69eme.net/mai-1940.