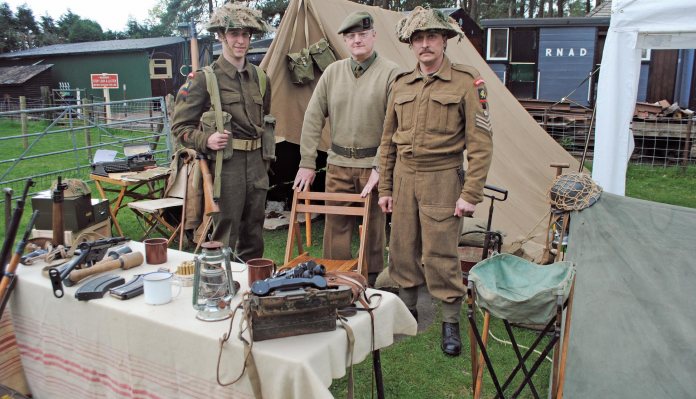 I recently visited the wartime weekend organised by Dave Allaway at the Rural Life Museum at Tilford near Farnham in Surrey. It was themed around VE Day to commemorate the 70th anniversary of the end of the war and was supported by a very good turnout. There was a cross section of presentations including Home Front with emergency services, including a very handsome Austin K4 fire engine of 1943 vintage.

I also made the acquaintance of a newlyformed group who call themselves ‘The Echelon’ and depict a Quartermaster’s area with a display of equipment which includes stores, ammunition and radios. Being new the group is still small but all the members are experienced re-enactors. The Rural Life Museum was the first public show for the group since its formation and the attention it was attracting was encouraging for the members. I spoke to Nick Parsons who explained that The Echelon has been created for those re-enactors who wish to step back from battle re-enactment but still be part of an active group. Echelon allows this with static displays of equipment and currently enjoys membership to depict the 5th Wiltshires and 43rd Wessex Division. They are flexible in their acceptance of cap badges to portray the QM area and hope that re-enactors depicting Royal Engineers, RAOC and RASC will join them.

Vast numbers of echelon troops were vital in supporting the frontline troops during the war. For instance, in the build-up for D-Day there were 54,000 such echelon troops supporting Canadian and British troops in the area of Hampshire and Sussex. This new group sounds like a good idea to me and presents more opportunity to display items collected by members. If anyone is interested in joining The Echelon they can be contacted by Emailing; nickparsons8891@ yahoo.co.uk.