The Royal Warwickshire Regiment in WII 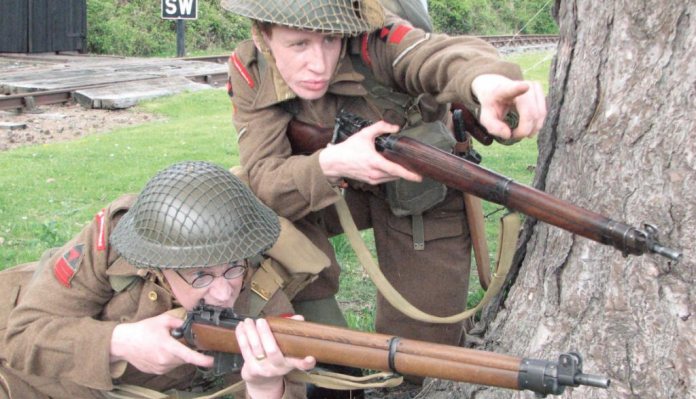 On the morning of the 6th of June 1944, many fine British regiments, each with their long and distinguished history, landed on the beaches at Normandy, which heralded the beginning of the Allied campaign to Liberate Europe. One of the regiments to land that day was the 2nd Battalion Royal Warwickshire Regiment, going ashore on Sword Beach, as part of 185 Brigade, in the area designated as ‘Queen White’. A tough fight already lay behind them from earlier in the war and another equally tough fight lay ahead of them, as many men were killed or wounded during the advance inland.

Dating back to 1674, the regiment had many battle honours from the Napoleonic Wars, South Africa and the First World War. Operation Overlord would add to that list and other battalions earned yet more honours, including Burma 1945 and North- West Europe. Today, almost, 350 years after it was raised, the regiment’s wartime history is commemorated by a dedicated group of some 25 re-enactors who portray a rifle platoon of B Company of the 2nd Battalion.

The group was founded eight years ago, since which time it has attended many events, putting on static displays and demonstrating the tactics used by the men and the equipment they used. It was at the 1940s Weekend on the Gloucestershire Warwickshire Steam Railway, near Cheltenham, that I had the opportunity to catch up with them and spent some time together. The presence of the group was a reminder that this year marks the 75th anniversary of D-Day.

In fact, Will Thatcher, one of the longest serving members of the group, explained to me that they have a full itinerary of events on the calendar over the next few months. Naturally, they will be visiting Normandy, to mark this milestone in regimental history and whilst there, between ten or fifteen members will undertake a ‘Tribute March’ to Lebisey, where more than 150 men of the battalion were killed, wounded or taken prisoner in the severe fighting. It will be a very emotional experience because several members of the group have direct family connections with the 2nd Battalion and a link with events, which they are there to commemorate.

It is not just Normandy that the group remembers in its re-enactment portrayals; they also remember the events at Wormhoudt, where men from the 2nd Battalion were killed by Germans on the 26th of May 1940, having been taken prisoner during the Dunkirk evacuation. The reconstructed barn serves as a memorial to the event and every member of the group knows the history and have visited the site to pay their respects. As far as they know, there are no veterans of the 2nd Battalion left alive from WWII, which is sad but inevitable. Indeed, it is to the memory of those men and the other battalions of the regiment, that they dedicate their depiction.

What they show at their displays is typical of an infantry platoon going into battle, complete with full kit, weapons and equipment. They put on a demonstration for me and they certainly are well motivated and representative of a typical soldier of the time. The weapons they carried included No4 Lee-Enfield rifles and a Mk II Bren Gun, which would have provided fire support. They are legally de-activated weapons purchased from dealers such as World Wide Arms (worldwidearms.com). Uniforms are mainly reproduction of high quality from the Welsh-based company of Soldier of Fortune (sofmilitary.co.uk) which offers a wide range of items.

The division and regimental badges worn on the uniform, such as the red triangle overlaid on a black triangle, the emblem of Third Infantry Division, and shoulder titles are obtained from Monty’s Locker (montyslocker.co.uk) which supplies a wide range of badges. Personal items, such as period spectacles, are available from specialist trader (deadmensspex. com) and items of webbing and other are obtained either from militaria shows, such as the Malvern Militaria Show or Stoneleigh, otherwise from traders at events. Members of the group also carry other items issued to troops of the time, such as pocket knives, but these are replicas obtained from the American-based company (whatpriceglory. com) which also supplies uniforms and kit.

The group is planning to broaden its display and has several projects in the pipeline. One plan, which is taking shape very nicely, is to obtain a blank-firing reproduction 6-Pounder anti-tank gun. This will allow them to present a display showing the anti-tank role of the infantry. The 2nd Battalion Royal Warwickshires fought a long campaign in Europe, from the Normandy shores to the crossing of the Rhine River in March 1945. The battalion paid a high price, with nearly 300 officers and men killed and a further 1000 wounded or missing. In effect, by the end of the war the battalion had been virtually replaced. It is for this reason, along with many others, why Will Thatcher and his friends chose to portray the battalion as a living memorial.

As well as putting on displays showing the landings on D-Day, the group can present the inland battles in which the Battalion took part, including Bourguebus Ridge, Operation Bluecoat, July-August 1944, the Falaise Pocket and Operation Varsity, the Crossing of the Rhine in March 1945. With such a history for a single battalion, the group has a lot to choose from and will not lack for inspiration. These displays include static exhibitions of kit and infantry patrols, to show tactics and weapon handling skills. The function of each piece of equipment can be explained and questions answered in full by any one of the friendly and very helpful members.

In addition to public displays at events, the group also supports the Regimental Museum. In fact, it is for the museum that they are hoping to raise money through sponsorship, by undertaking the 15-mile march to Lebisey with each man carrying an authentic load of 70-pounds to represent battle conditions. It will be tough going, but they are confident. If anybody would like to pledge support, they can visit the Website at: justgiving. com/crowdfunding/royalwarwicks2019

The Regimental Museum figures significantly in the group’s displays and they promote it in return for the support it has provided them. In 1968, the regiment was amalgamated with several other regiments and became the Royal Regiment of Fusiliers. The Royal Regiment of Fusiliers Museum is located at St John’s House, Warwick, CV34 4NF. The website can be found at: warwickfusiliers.co.uk.

Just like most re-enactment groups, the 2nd Battalion Royal Warwickshire Regiment group welcomes enquiries from potential recruits wishing to join their ranks. Social media is a good method and they can be contacted on Facebook at: facebook.com/ royalwarwicks/ The group can also be contacted though its website at: royalwarwicks.com So, if you fancy the idea of becoming a British infantry regiment with a long history, then contact the group, it might be they are just what you are looking for.