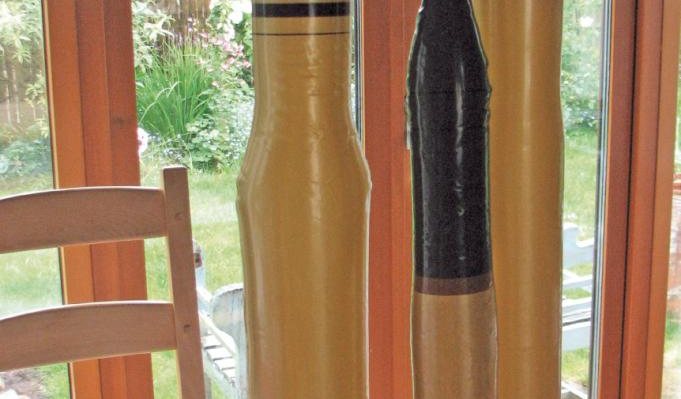 In co-operation with the Tank Museum at Bovington in Dorset, the design team from River Horse has developed a range of inflatable tank ammunition! At present, there are three product items in the range, but they may consider developing other types. One example, is the Russian 76.2mm ammunition fired by the T-34 tank.

When I first heard of these items, I must admit to being rather sceptical about the idea, but having received review samples, I was surprised how good and also large they are.

I checked the markings for authenticity against the real thing and the 17-Pounder armour-piercing shell of 76.2mm calibre, as fired by the ‘Firefly’ version of the Sherman tank, had a black tip to the projectile head with red and black bands. Looking at the inflatable model, it corresponded with the real thing. There were a few wrinkles, as to be expected in something inflated, but it was acceptable, in my opinion, to serve as an example to show how the real thing looked.

The next item I checked was the 75mm armour-piercing shell, as fired by the M3 gun on the Sherman M4 tank. I got out the tape measure for this and the diameter of the base on the shell case is 86mm and the overall length of the item is 680mm. The projectile head is olive green, with two black bands to designate its type. Comparing it to the 17-Pounder shell, this seemed small but it was the correct scale. Last, was the mighty 88mm, which took a couple of breaths to inflate and, like the 17-Pounder, the size was impressive. Details on the base of the cartridge indicated that it was fired by the Flak18 version of the 88mm antiaircraft gun, which could also be fired by the Tiger tank. Diameter of the cartridge case base of this inflatable version is 111.5mm and overall length is 890mm and the calibre of the projectile would have been slightly larger than the 17-Pounder shell.

These inflatables come in at only a fraction of the real thing and, what is more, they pack down to a size that can be slipped into a pocket. The dimensions may not be exactly spot on, no inflatable item can ever be that precise in measurements, but they are passable representations.

For a group who wants to show examples of different calibres of guns used during WWII these are ideal, but not good enough to try passing them off as the real thing. I have shown them to several re-enactors who, like me, were doubtful at what they were about to see. On being inflated, they agreed that the scale was fine and for that reason they were good to use to compare calibres. The low cost compared to an inert example of a real shell is a small investment to expand a display. Alternatively, as a tongue in cheek gift for a military enthusiast, they would understand the humour.

If all goes well for the existing items in the current range, we may see further models. I am not trying to ‘dumb down’ a very serious pastime, but rather exploring ways to keep costs to a minimum, when it comes to putting together a display.

Some re-enactors wear reproduction uniforms and carry replica weapons, so why not inflatable ammunition? The items are available online through the River Horse website at: www.riverhorse. eu These products are worth being looked at, and I’ll even go so as far to say that I think you may find yourself convinced and possibly even consider buying some just for display purposes. As life-size models go, some groups could find they end up being very useful items to have.